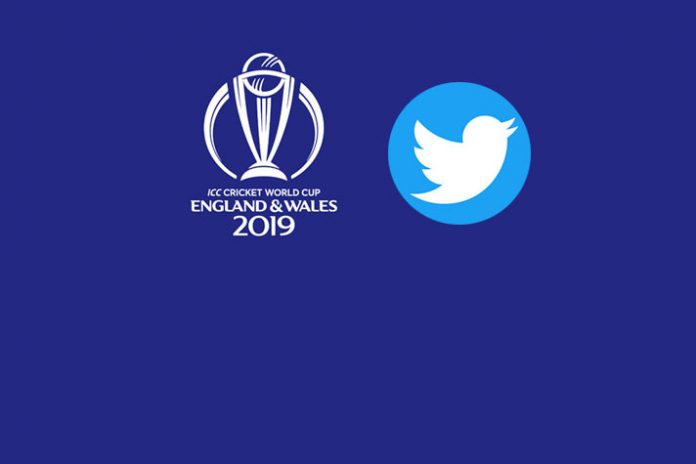 Heat intensifies as the busy cricket summer extends to the @ICC World Cup 2019. Twitter has come up with new features to ignite the World Cup fever.

During the May 30-July 14 World Cup in England and Wales, Cricket lovers will be able to follow all the live action around#CWC19 on Twitter and talk about what’s happening in the world of cricket.

Twitter is the fastest way to see the latest news around #CWC19 and to talk about the action on and off the pitch.

In a first-of-its kind product experience in cricket, the social media platform has made following the @ICC World Cup easier and more compelling by allowing fans to track the games in real-time through a unique live scorecard in the app. Fans can tap on the Twitter Moment Tweeted by @MomentsIndia, follow the scores in real-time, as well as see multiple timelines of latest Tweets, top commentary, and videos. This live product experience, as well as additional Twitter Moments will help cricket fans find the most engaging Tweets from teams, players, commentators and other fans during #CWC19.

Another feature that will help cricket lovers stay on top of the #CWC19 games is Twitter’s new breaking news notifications. In India, Twitter recently launched a push notification feature, where the platform occasionally pushes personalized news notifications in sports, entertainment or current affairs so people can stay more connected to what’s happening in their world.

Twitter has partnered with ICC to bring fans highlights and behind the scenes content after every match.

Through Twitter’s content partnership with the International Cricket Council, the @ICC and @cricketworldcup official handles will be natively Tweeting video highlight clips from each game, recapping every match. The handles will also be Tweeting unique videos, behind the scenes content and interviews with captains, enabling fans to connect with players and experts and learn their favourite plays, moments and more right on Twitter, the social media platform has stated in a Press release.

Watch as ??’s @imjadeja dishes the dirt on his teammates! #CWC19 pic.twitter.com/hRy8BGtgGw

This Cricket World Cup, people can Tweet with a special trophy emoji for the tournament and team slogans for each of the ten teams playing in the #CWC19 unlock a special jersey emoji representing the official country kit, allowing fans to express their pride!

Our friends at @TwitterSports have made emojis for each @cricketworldcup team (plus a trophy for the #CWC19 hashtag!)

What’s more, custom emojis for the team captains during the seven weeks of the tournament ensure every Tweet about wickets taken, boundaries broken and games won is even more fun.

Rahul Pushkarna, Head of APAC Content Partnerships at Twitter said, “Twitter has transformed the connection for fans to their favourite sport and athletes in India and across the world – and nowhere is this truer than with cricket. Fans can catch live #CWC19 updates from their favorite teams, players, coaches, writers, celebrities and fellow fans on the platform. We are thrilled to associate with ICC for the Cricket World Cup 2019, and launch new product experiences that bring cricket lovers closer to the action.”

All of the national teams competing this year in #CWC19 are active on Twitter. Follow this list of official accounts to get the latest updates on your favourite teams:

Get set for an eventful ICC #CWC19 on Twitter for the next eight weeks!