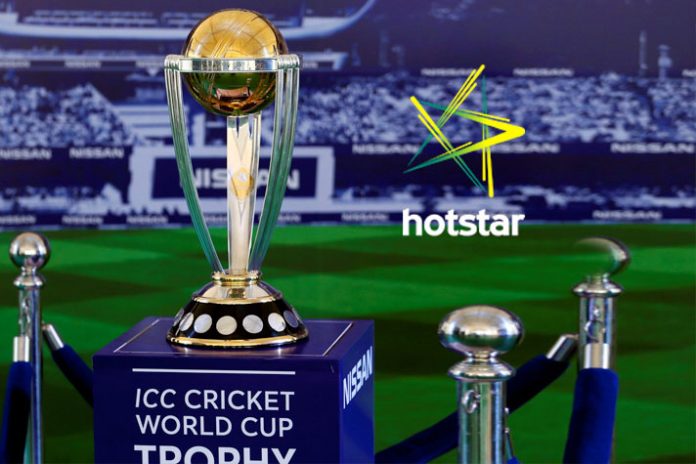 Hotstar, exclusive partner to stream the ICC World Cup 2019, is eyeing to extend the spree of global concurrency records during the May 30 to July 14 global cricket carnival in England and Wales. The immense reach, bolstered by aggressive programming and business strategy, has made Star Sports’ OTT platform the fancied destination for the brands.

The video on demand platform has registered a 100% growth in viewership for ODIs since 2018 and promises to make this World Cup bigger and better than ever before. The ten-team competition will be going beyond the Indian territory with the cricket fans in the USA and Canada also getting the LIVE World Cup feed on Hotstar via the web (us.hotstar.com), Google play store, app store, besides living room devices like Roku TV, Apple TV, Amazon Fire TV Stick, Android TV, and Samsung Smart TV.

The value addition includes simultaneous streaming in six language and ‘Watch ’N Play’ feature that allows fans to come together digitally and interact irrespective of their locations during the games.

With the right value and traction in the offing, eight streaming partners have come on-board Hotstar for the ICC World Cup. The platform has announced Dream 11, Uber Eats, Amazon Pay and Coca Cola as the co-presenting sponsors this year, while the associate sponsors include Royal Challenge, Acko, CEAT, and ICICI Lombard.

“Our success in the IPL 2019 in terms of viewership and reach is a testament to the platform’s superior standard of live sports streaming. Over the years, Hotstar has constantly raised the bar of tech innovation, proving its mettle at handling the immense scale and traffic seamlessly. With the cricket behemoth, ICC World Cup 2019, on Hotstar, we aim to continue delivering an uninterrupted and immersive cricket watching experience not just to the domestic consumers, but to global audiences in the US and Canada as well,” said Hotstar chief product officer Varun Narang.

The recently concluded IPL 2019 was a record-breaking tournament for Hotstar, with the platform not only registering an excess of 300 million unique users but also witnessing a 74% increase in watch-time as compared to last year, further cementing its position as the home of digital sports viewing in India. Hotstar also broke its previous global concurrency records with 18.6 million concurrent viewership during the IPL 2019 finale. The season also observed an overall 45% growth in non-metro viewership with some of the highest growth in viewership coming from cities like Coimbatore, Lucknow, Patna, Ranchi, and Salem.

Hotstar is aiming to breach the global concurrency record during the World Cup, which may happen as soon as on June 16 when India take on arch rivals Pakistan at Old Trafford, Manchester.