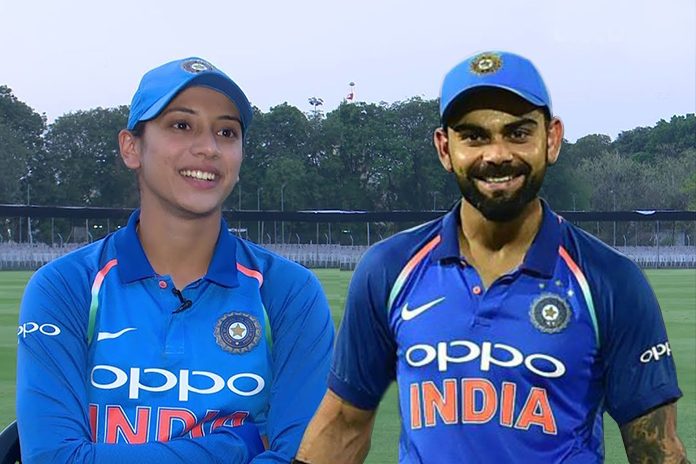 Virat Kohli and Smriti Mandhana are among the world’s top 50 most marketable athletes. There is no other Indian in the chart topped by Paul Pogba, the star of 2018 FIFA World Cup.

Indian skipper and global cricket icon Kohli is at the 12th spot in the list which features the 22-year-old women’s cricket sensation Smriti Mandhana in the 49th spot just ahead of Irish MMA star Conor McGregor. The list is based on marketing potential over the coming three-year period, with particular emphasis placed on value for money, age, home market, charisma, willingness to be marketed and crossover appeal.

The top 50 table, in the eighth year of its publications, has been released by SportsPro Media in collaboration with their official data partner Hookit – a premium social and digital media analytics tool for sponsorships and activations valuations.

In departure from the previous editions, the latest rankings are based on the Hookit Marketability Score criteria (out of 100) which provides a unique and exclusive measure of an athlete’s influence on social media, highlighting engagement rates across their promoted posts on four of the main platforms – Facebook, Instagram, Twitter and YouTube.

While Kohli has achieved a marketability score of 34.2 out of 100, he has lost seven spots since the 2017 rankings. Smriti Mandhana, on the other hand, with a score of 33 is among the few new entrants in the list.

The world’s top 50 most marketable list includes athletes from 18 nationalities across 19 different sports. There is 28% female representation. Ace cricketers and brand icons Virat Kohli and Smriti Mandhana are the only Indians. England’s wicketkeeper-batsman Jos Butler is the only other cricketer in the list.

For someone who can rake in a whopping $114,416 (₹82.5 Lakhs) from a single sponsored Instagram post, Kohli is undoubtedly the most followed brand icon among the elite sportspersons and celebrities in India. The 29-year-old is also the only Indian in the Forbes 100 world’s highest-paid athletes for netting $24 million ($20 mn from endorsement deals) in 2018, gaining six spots since 2017 rankings when his annual earnings grossed $22 million.

Smriti Mandhana, till date, has amassed 2,402 international runs from 2 tests, 41 ODI and 42 T20 internationals since her international debut in 2013. The Mumbai girl was adjudged the Best Women International Cricketer by the Board of Control for Cricket in India in June 2018. She, along with Harmanpreet Kaur, became the first India women to play in the Australian Women’s Big Bash League (WBBL) after signing up for one-year with Brisbane Heat.

Smriti Mandhana was part of the Indian team to reach the final of the 2017 ICC Women’s Cricket World Cup where the team lost to England by nine runs. In March 2018, she scored the fastest fifty for India in a Women’s T20I fixture, taking 30 balls to reach a half-century against Australia in the 2017–18 Tri-Nation Series. The following month, she was named the player of the series, for the three ODI matches played against England.

Smriti Mandhana also became the first Indian women cricketer to play in England’s Kia Super League T20 cricket tournament in 2018 signing up with Western Storm, where she scored her first century on August 3. She was also named in Forbes 30 Under 30 2018 Asia in the Entertainment & Sports category for her prolific achievements in cricket.

Joshua, who was the leader until the last year, has been relegated to the second spot in the 2018 rankings.