CWG 2022 India DAY3 LIVE – India Today CWG 2022 LIVE – . Jeremy Lalrinnunga & Achinta Sheuli win gold for India in CWG 2022: Weightlifter Achinta Sheuli has won India’s third gold medal in Weighlifting as he finished in teh first place in the Men’s 73 kg category. This is India’s sixth medal in the sport as he created a Commonwealth Games record by lifting a total of 313 kgs. Earlier in the day, Weightlifter Jeremy Lalrinnuga created a new Games record in the Commonwealth Games and has won gold with an overall lift of 300kg. Follow Commonwealth Games 2022 LIVE updates with InsideSport.IN

But in Boxing Shiva Thapa has lost his LAST-16 bout. Though the Women’s World Boxing Champion Nikhat Zareen moved into quarterfinals of the light flyweight category after a win over Helena Ismael Bagao. In the women cricket contest, India beat Pakistan by eight wickets to register first win. Meanwhile, India’s mixed badminton team has reached semifinals after blanking South Africa 3-0.

CWG 2022 LIVE: Who is Jeremy Lalrinnunga? Watch him LIFT GOLD Medal for India

With a lift of 300kgs overall in the men’s 67kg final, Jeremy has helped India win their second medal.

Ronaldo has moved into the next round of the men’s sprint. He finished 13th, clocking 10.012 to progress further. The other two has failed in their objective.

Srihari Nataraj has moved into the semifinals of the men’s 50m backstroke. He finished second in Heat 2, clocking 25.52.

Nikhat Zareen did not break much sweat to defeat Helena Ismael Bagao with the contest being stopped in the third round. The world champion has moved into the quarterfinals of the competition.

It is a big upset for India as boxer Shiva Thapa has lost his LAST-16 bout.

Sumit Kundu suffers a 0-5 defeat to Australia’s Callum Peters in 75kg Round of 16 bout. 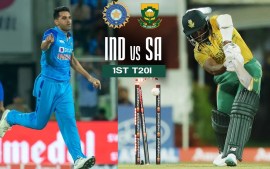