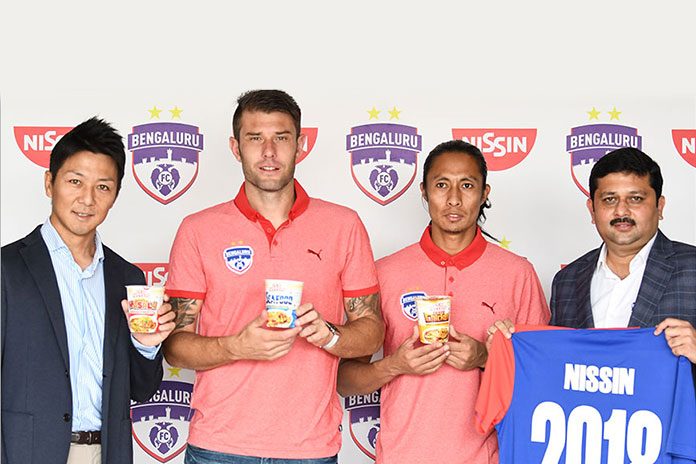 Indian Super League side Bengaluru Football Club (BFC) has announced a three-year partnership with Japanese food producer Nissin. The Blues will be Nissin’s first-ever association with an Indian football club, having joined hands with English Premier League side Manchester United as a global partner in 2014.

Talking about the association, club COO, Mustafa Ghouse, said, “We are delighted to have Nissin on board as they have a long tradition of raising the bar in their industry. Nissin has successfully associated with sport in the past and we’re looking forward to working closely with them.”

Ryusuke Miyake, Director of Marketing, Indo Nissin Foods Private Limited, said, “Nissin is the inventor of instant noodle and the company was founded by Momofuku Ando in 1958 in Japan. Our founder’s principle is that ‘eating and sports are the two axles of human health’ and basis this, Nissin Group is known for associating with world-class teams and players across different sports. In their debut year of the Indian Super League, BFC was able to reach the finals and we are thrilled to connect on this game spirit as the instant noodle partner. Nissin’s brand Cup Noodles is a youth brand and we realize that India’s youth is swiftly gaining interest in football and its popularity is growing. We look forward to being on this historic journey together.”

Also Read: Is Indian Super League running out of steam for sponsors?

Nissin, who will be the Blues’ Official Instant Noodles Partner, will have a strong presence at Bengaluru FC’s home games at the Sree Kanteerava Stadium, with sales points on the concourse and more, the company said in a statement. Nissin branding will also be visible on stadium perimeter boards at all games, as well as official Club publications and the Club’s official website.

The Blues take on Chennaiyin FC in their opening game of the Indian Super League, at the Kanteerava Stadium on September 30.