Genshin Impact 2.4: Everything You Need to Know about Windtrace Event

Windtrace, the Classic game that has been passed down in the history of Mondstadt will be making its appearance once again. This event will start on the 13th of January, 2021, and will end on the 27th of January, 2021. The players need to be Adventure Rank 20 or more than to participate in this interesting event. The event will be the same as the last time. There will be hunters and rebels. However, to recruit even more players, Gygax has now added some more maps into the game. The maps areas are in the image below.

Also Read: Genshin Impact 2.4 Update: Players frustrated due to the difficulty of the Event A Study In Potions

The players can either make a custom Co-Op party or select the Co-Op Mode to begin matching. The players will be assigned the roles of rebels and hunters randomly. Rebels are the players who will need to hide and avoid the hunter until the time is up and Hunters have to capture the rebels within the time limit.

Along with this players can also earn Windtrace Event Coins to claim rewards. These rewards will be of Primogems, Hero’s wit, and much more. However, do notice that Windtrace Coins can only be collected while you are playing randomized games. If you’re playing in Custom Co-Op Party you can’t get Wndtrace Event Coins. This game mode requires four players to start. Let’s take a look at the abilities of Rebels and Hunters

The developers also mentioned that the two-player mode is still in development. The users can select the Windwards art they want to use before the game starts. Also, note that the alternate sprint skills of Kamisato Ayaka and Mona cannot be used in the Windtrace Event. For a more detailed guide check out the official miHoYo Blog. 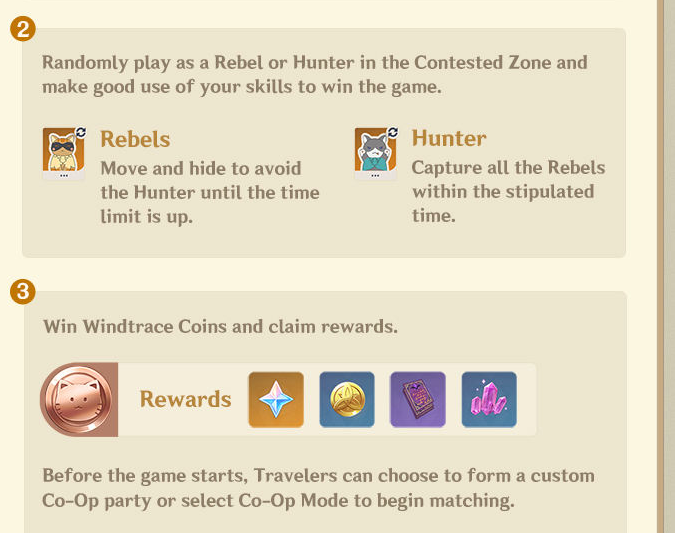 That said, make sure to be a part of this event and earn a lot of rewards. Moreover, this event will surely be super fun and interesting. You can even complete Windtrace Challenges to Earn mora. And along with the developers have planned a lot more stuff for us in the Genshin Impact 2.4 Update.