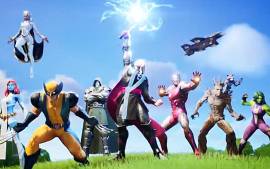 Fortnite- Marvel Skins to Item Shop: Loopers are in for treat as multiple Marvel skins return to the Item Shop tomorrow. Marvel…

Fortnite- Marvel Skins to Item Shop: Loopers are in for treat as multiple Marvel skins return to the Item Shop tomorrow. Marvel has been one of Epic Games’ biggest collaborations on Fortnite. Over the years tons of fan-favorite skins have been released. With each collaboration getting bigger than the previous one, Marvel fans can collect all the skins they missed out on previously. For future updates on Fortnite Chapter 3 Season 3, Follow InsideSport on GOOGLE NEWS.

Marvel skins are set to return on August 7th and leave a week later! (via @imentoyt) pic.twitter.com/EMvTvVrJYm

Marvel and Fortnite first collaborated back in Chapter 2 and since then there has been no looking back. Even the most recent Fortnite Crew Pack has the latest Wolverine skin, a Marvel creation. Furthermore, the bond has gone so deep that Fortnite was even featured in Zero War comics. This special series of comic books have their own timeline and universe.

Also Read: GTA 6: Industry Insider feels “Community WILL HATE” GTA 6 despite all the HYPE, CHECK WHY

Fortnite is bringing back Marvel skins from a long time back

Fortnite is all set to bring back multiple skins from Marvel comics which were previously released in the game. Based on the leaks, 16 different Marvel skins and bundles are expected to return to the game.

The 16 Marvel Tabs are expected to return from August 7th according to @imentoyt as that is when the Marvel pack is scheduled to return.

Here's all the skins/bundles that *COULD* return, not all of them are guaranteed!

What are you looking forward to the most? pic.twitter.com/VOG2at0iI9

There are a lot more like Thanos and Ghost Rider present in the leaks but players should remember that there is no guarantee on this prospect.

The prices of the individual skins and bundles are expected to remain the same as they were upon release. Loopers need to take it into consideration that these are leaks and some of the above mentioned skins and bundle might not make it to the Shop section on August 7th.

For more information related to Fortnite and other gaming titles, follow InsideSport.IN