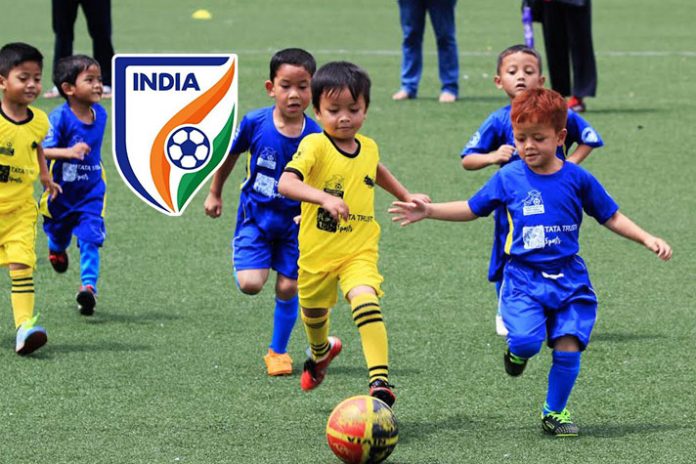 From the Kashmir Valley to the north-eastern corner of Lunglei, ‘Baby Leagues’ are mushrooming all across India with the national football federation’s backing to catch them as young at six and lay the foundation for a “better future” for the sport.

Launched in September last year, Baby Leagues have been a hit in the Kashmir Valley, Mizoram, Bengal, Tamil Nadu and Maharashtra. States like Gujarat, Kerala, Karnataka and Punjab are also catching up with the trend.

The number of participating children reached 21,471 last year itself and it rose to 43,575 this year, according to the figures provided by the All India Football Federation (AIFF).

The number of registered teams was 5,335 last year while 21,130 matches were played in all. The AIFF decided to rechristen the initiative as ‘Golden Baby League’ from this year onwards and the first edition was held in Meghalaya recently.

Last year, the AIFF gave a subsidy of ₹85,000 each to Baby Leagues of 99 age groups run by 30 license holders, from the $250,000 fund sanctioned by world football governing body FIFA under its Forward Programme.

“We need to create a competitive environment in which the players are developing their creativity, self-expression, passion of the game and discovering the value of friendship throughout the team. That was the idea of these Baby Leagues,” AIFF Technical Director Isac Doru told PTI.

“The formative years of a child have always been the bedrock of a successful footballing culture. The AIFF is now stressing to popularise the sport among the kids. We aim to have every kid playing football especially from ages U-6 to U-12. The more they play, the more Indian football will benefit,” AIFF General Secretary Kushal Das said.

The Kashmir Valley conducted 15 Baby Leagues last year with kids of under-11 category taking their first steps towards ‘The Beautiful Game’.

Two leagues — one each in Srinagar and Kulgam — were exclusively for girls.

“We have received great response not only from Srinagar but from everywhere in Jammu and Kashmir, may be because of Real Kashmir’s performance in the I-League,” J&K Development Officer Bilal Punjabi said.

“A Baby League in Baramulla is in the pipeline,” he added.

In Pulwama, where more than 40 CRPF personnel died in a terrorist attack in February, two Baby Leagues were run in quick succession last year with 192 kids across U-9, U-10 and U-11 age groups participating in 168 matches.

“We had conducted a snow league also which was an instant hit among the kids. As per FIFA guidelines, we used red paint for line-marking and fluorescent yellow ball. Almost 200 kids poured in for the snow league as well as the regular one,” added Punjabi, who is one of the 11 development officers appointed by the AIFF across the country.

“Kulgam is one of the troubled areas but when we needed (to run the Baby League) it delivered big time. 189 kids who were divided into eight teams across U-9, U-10 and U-11 age groups, played 168 matches,” he said.

There is another Baby League in Ladakh in four age groups, which also got subsidy from the AIFF.

For U-6 kids, it is three-a-side match divided into four quarters of six minutes each with a two-minute break in between.

The number of players each side can go up to 11 in U-11 and U-12 and they play in two halves of 25 minutes each with an eight-minute break in between.

The recommended matches per day is three till U-9 and maximum match days per week is two. The fields are smaller, starting from 10x15m to 12x20m size for 3 vs 3 matches for U-6 kids.

The Baby Leagues are registered through an app run by the AIFF. The operators are given license by the AIFF after consultation with the concerned state association which inspects the ground and capacity of the organisers.

The operators have to conduct at least three age-group leagues and have at least eight teams registered to get an AIFF license.