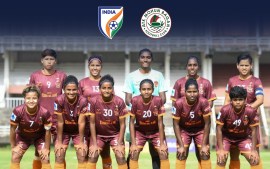 AFC Cup 2022 – Gokulam Kerala stuns ATKMB: ATKMB had a horror show on their home turf when they faced fresh I-League…

AFC Cup 2022 – Gokulam Kerala stuns ATKMB: ATKMB had a horror show on their home turf when they faced fresh I-League winning side Gokulam Kerala. The Kerala outfits pulled off a stellar win and an equally important upset on the Kolkata giants as the final scoreline read 4-2 in favor of the I-League side. This opening win against ATKMB in the AFC Cup will act as a major confidence booster for the Kerala side. Follow more Updates with InsideSport.IN.

ATK Mohun Bagan experienced a major upset at the Salt Lake stadium as the ISL side had no idea to counter the offensive movements of the I-League side. The Mariners started the game on a positive note after launching attacks from the very first minute. The first half saw an all-out attack from ATKMB but the two sides headed into the second half with a 0-0 scoreline.

Luka Majcen bagged a brace and set up another goal for the I-League champions, who scored three times in 15 second-half minutes to stun Juan Ferrando’s charges in front of over 30,000 thoroughly entertained fans.

Having survived that early onslaught, Gokulam Kerala grew into the game, and had a close call of their own when Emil Benny’s curling effort edged narrowly over the crossbar, while ATK Mohun Bagan suffered a blow when defender Tiri sustained what appeared to be a serious leg injury while attempting to dispossess Majcen.

The hosts had piled on a dozen shots at goal without reward in the first half, and their early wastefulness came back to haunt them just six minutes into the second, with Majcen left totally unmarked to poke home Thahir Zaman’s cross and put Gokulam Kerala ahead.

A memorable night for Vincenzo Alberto and his men, as they make a statement on their debut on the continental stage 💯🙌🏽#AFCCup2022 | #GFCvAMB pic.twitter.com/lvO0zMrFut

ATK Mohun Bagan were level just two minutes later, with Pritam Kotal on hand to steer home Colaco’s corner kick, which Gokulam Kerala did little to defend having fought so hard to take the lead, but it wouldn’t be long before they regained their advantage.

The Indian Super League side’s poor marking was punished for a second time, with Jourdaine Fletcher able to take his time picking out Rishad PP, who steered the ball home despite a solid touch from goalkeeper Amrinder Singh to make it 2-1 on 57 minutes.

Gokulam Kerala were in full swing, and they extended their lead through Majcen eight minutes later, with the Slovenian ghosting into open space to expose ATK Mohun Bagan’s defensive frailties for a third time and taking his personal tally for the night to two.

The impressive Colaco gave Ferrando’s men a fighting chance when a curled in a superb free-kick to make it 3-2 with 10 minutes remaining, but it wasn’t enough to deny Gokulam Kerala, who finally put the result beyond doubt when Jithin MS latched onto Majcen’s pass before easing the ball home from close range in the 90th minute to seal a famous win.