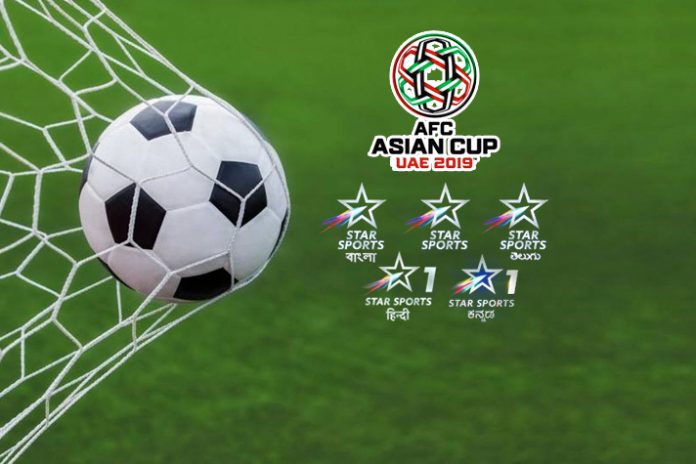 Star Sports, the official broadcaster of AFC Asian Cup UAE 2019, will telecast all the India games in English, Hindi, Tamil, Bengali, Kannada, and Malayalam to ensure fans get an opportunity to cheer for their team in their preferred language. This will be the first time Team India – Blue Tigers’ participation in a major international tournament will be telecast in six languages.
Keeping fans at the heart of the experience, Star Sports’ broadcast of the AFC Asian Cup UAE 2019 will include an immersive, 360-degree coverage of the Blue Tigers. The broadcast offers fans the best of football action on and off the field, extensive commentary from football experts across languages and special programming for the Blue Pilgrims.
Star Sports broadcast of AFC Asian Cup UAE 2019 will include previews, reviews and extensive analysis of all the games played throughout the tournament. These insights will be shared by some of the best football experts in the world, both from the venue as well as from specially designed in-house studios for the tournament.
Legendary football commentator John Helm will be accompanied by Paul Masefield for commentary from the venue. These experts will be joined by India’s AFC Asian Cup 2011 squad members Renedy Singh and Mehrajuddin Wadoo as they share their expert opinions during the English broadcast from the in-house studios.
Also Read: AFC Asian Cup 2019: Full Schedule, live stream, where to watch
The first ever broadcast of a major football tournament involving India in six languages will also include a host of language experts lending their voice for the broadcast involving all India games. Raman Vijayan in Tamil, Jo Paul Ancheri in Malayalam, and Debjit Ghosh & Rajat Ghosh Dastidar in Bengali along with NS Manju (Kannada) who represented India in AFC Asian Cup 2011 will be a part of the Star Sports broadcast plans for AFC Asian Cup UAE 2019.
The Indian national football team has seen massive growth in support on the back of some strong performances at the international stage, which saw India breaking into the top 100 in FIFA rankings and hosting major international tournaments such as the FIFA U-17 World Cup India 2017, Hero Intercontinental Cup and other international games.
Blue Tigers will look to overcome challenges from hosts UAE, Bahrain and Thailand in the group stage in order to advance to the Round of 16 – a feat they have achieved only once in the history of the tournament in 1964 when the team ended as the runners-up of the tournament.
Star Sports will telecast all the games from the tournament LIVE on Star Sports 3, with the LIVE telecast of India games in six languages across Star Sports network and Hotstar.
India is grouped with hosts UAE, Thailand and Bahrain in Group A. Team India will play their first game against Thailand on 6 January 2019.
Also Read: AFC gives AIFF plan to merge ISL and I-League: Report