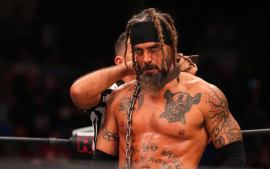 WWE superstars react to the passing of Jay Briscoe

WWE superstars react to the passing of Jay Briscoe-As Khan stated, Jay Briscoe spent over two decades in the pro wrestling industry as one of the premiere tag team stars in the game. He was a former Ring of Honor world champion and held the tag team titles alongside his brother, Mark, at the time of his death.Follow WWE Raw Live Results with InsideSport.IN

Sadly, Jamin Pugh has passed away. Known to fans as Jay Briscoe, he was a star in ROH for over 20 years, from the first show until today.
Jay and his brother Mark dominated ROH, reigning as champions to this day. We'll do whatever we can to support his family.
Rest In Peace Jamin

The Briscoes have always been deeply ingrained into the ROH culture, two of the longest tenured members of the promotion who were known for going as far as they needed to go to entertain. They were great pro wrestling characters but equally great in the ring and cut promos you would never hear anywhere else. They were a unique tag team who always seemed destined for bigger and better things.

Jamin Pugh, also known as 13- time Ring of Honor World Champion Jay Briscoe, passed away on January 17, as he was in a fatal car accident. The former ROH World Champion was a OH Fall of Famer, and he was renowned by fans and wrestlers like. Many names in the wrestling world commented on the news of his passing/

Some of the reactions can be seen below:

I have to put my phone down for a bit so I apologize if I don't respond timely but, if you were a fan of Jay Briscoe, you were a fan of Jamin Pugh. Jamin was a great, hard working man that wanted to make his family proud and entertain his fans. We will miss him dearly.

Jay Briscoe showed me respect and love when everyone told me he wouldn't. If you knew Jay, you knew he would uplift everyone in that locker room regardless of whatever world they came to wrestling from. The best. Rest easy, brother.

Heartbroken. I can't believe this.

Jay Briscoe was the best, I don't know what else to say. Love & support to Mark and the family.

A lot of brothers & sisters are hurting tonight. 💔

Jay Briscoe (Jamin Pugh) was a real one. Every time we saw each other we’d both light up and hug one another. My condolences and prayers go out to his loved ones. Rest In Peace my brother.

Jay Briscoe was a wonderful human being and he loved his family so much. So much. He was so proud of them. Rest with God my friend.

All the time you was amazing with me!! Your attitude your charisma and your simple way to live the wrestling life! I’m gonna miss you a lot mi amigo go to the heaven cause you deserve it 🖤
RIP Jay Briscoe. pic.twitter.com/7c8l9rcf8h

I didn’t interact much with him, but upon meeting Jay I instantly understood something about him…his family was his everything. All the love in the world to them this evening.

Jay Briscoe has passed away at the age of 38 https://t.co/69qjenqoBn pic.twitter.com/7NGhJw28vU

There are few details surrounding the circumstances of his death, though PW Insider reports there was a car accident.

May he rest in peace.

WWE superstars react to the passing of Jay Briscoe