WWE SmackDown Results: Another week and another edition of Friday Night SmackDown awaits the WWE Universe. This week’s show will stream live from the Mohegan Sun Arena at Casey Plaza, Wilkes-Barre, PA. Follow WWE SmackDown and Live Updates on InsideSport.IN

In the main event of Friday Night SmackDown, The Undisputed Universal Champion Roman Reigns stepped in the ring alongside the Usos and special counsel Paul Heyman. The Tribal Chief addressed his victory over RK-Bro and Drew McIntyre at WrestleMania Backlash. Moreover, Reigns name-dropped John Cena and Brock Lesnar.

"@JohnCena is ten times the Superstar you will EVER be!" 😱#SmackDown @RandyOrton @WWERomanReigns @HeymanHustle pic.twitter.com/7BD78szx5Z

Eventually, Reigns headed towards RK-Bro’s challenge when RK-Bro interrupted him. Randy Orton and Riddle confronted the Bloodline for the tag team unification match disrespecting Roman Reigns. However, to everyone’s surprise, The Usos accepted the challenge and set the match for next week on SmackDown.

The Usos mocked RK-Bro and stated to be the new unified champions when Riddle hit a knee on Roman Reigns. A hard hit to Roman Reigns from Riddle.

Butch vs Kofi Kingston: On the recent episode of Friday Night SmackDown, we had Butch and Kofi Kingston in action. Sheamus and Ridge Holland were on the sidelines as Butch dominated the match. Butch grabbed Kofi Kingston on the ringside and tossed him in the ring.

However, Kofi fought back against Butch and tried to take control of the match. But Sheamus and Ridge Holland distracted Kofi. Meanwhile, Butch took advantage and ended the match with a bitter ending. A win for Butch defeating Kofi Kingston.

Team GLOW retain their titles after Naomi countered Natalya's sharpshooter and got the pin! #SmackDown pic.twitter.com/7IJisjVWOH

Natalya delivered hard strikes to Naomi, but Sasha Banks aided Naomi to counter Natalya. Soon, Shayna Baszler knocked Naomi while pinning the Natalya. Taking advantage of the situation, Natalya tried to deliver the sharpshooter. However, Naomi caught Nalaya in a pin and won the match.

Happy Corbin hit Madcap Moss with a steel chair. Later, he put the steel chair around Madcap’s neck and smashed it using the Andrade the Giant trophy. A lone wolf unleashed his brutality on SmackDown.

Raquel Rodriguez started the match with a dominating start in the match. Raquel tossed Ronda, again and again, to keep her dominance in the match. Later, Raquel delivered a side slam countering Ronda’s armbar submission. Both women gave a tough fight in the ring but Ronda Rousey hold Raquel in a guillotine.

However, the challenger countered it by tossing the champion. Later, Raquel tried to deliver the chingona bomb, but Ronda held her arm surviving the match. In the final moments of the match, Ronda caught Raquel in a pin defeating Raquel Rodriguez to retain her title.

Riddle Defeats Sami Zayn: On the recent episode of Friday Night SmackDown, after Adam Pearce’s official announcement for Riddle vs Sami Zayn, both men immediately started the match. Sami Zayn and Riddle engaged in a tough fight where Riddle delivered hard hits to Sami. Also, Sami Zayn delivered some hits to Riddle to stay on his feet.

Later, Riddle delivered a sidekick to overcome the odds of making his comeback. The match continued under Sami Zayn’s control. However, Riddle made his comeback with a knee to Sami Zayn. Although Sami Zayn gave his best, he couldn’t stop the Raw tag team champion. 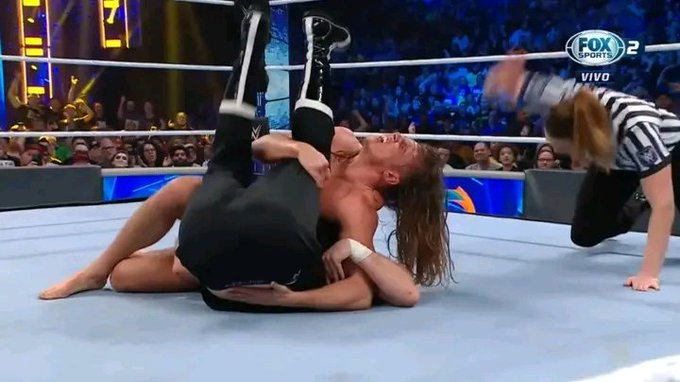 In the final moments of the match, Sami Zayn smashed Riddle into the ring post and drove him into the timekeeper’s area to win the match with a count-out victory. But, Riddle won the match with the Bro Derek finisher.

Sami Zayn interrupts RK-Bro: The Raw Tag Team Champions RK-Bro kicked off Friday Night SmackDown. The duo addressed their loss against The Bloodline at WrestleMania Backlash. However, Randy Orton and Riddle mocked the SmackDown Tag Team Champions The Usos who always need Roman Reigns back whenever they can’t handle the business.

Further, Randy Orton called out the Tribal Chief in the ring but surprisingly the former Intercontinental Champion Sami Zayn came out. Sami Zayn and RK-Bro got engaged in a heated argument where Randy Orton stipulated a match between Riddle and Sami Zayn.