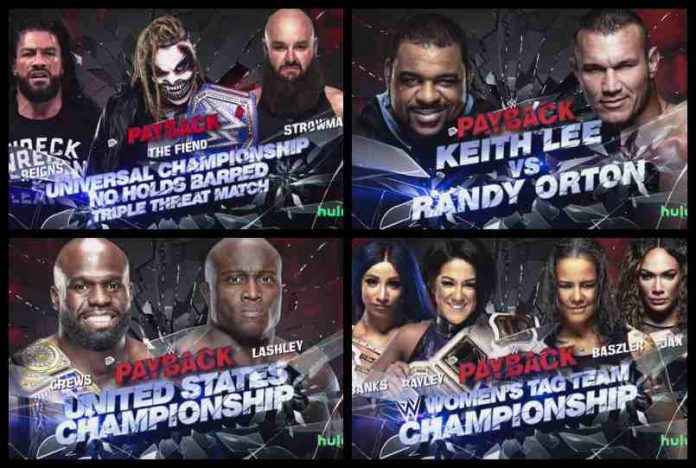 WWE Payback: WWE’s next PPV – Payback is scheduled to take place this Sunday on 30th August Live from Amway Center. This colossal event has already featured four high-profile matches for Sunday. However, upcoming episode of SmackDown is expected to add more matches into account to make it even from both sides.

However, let us check the confirmed matches so far for this event.

Apollo Crews the current United States Champion successfully defended his Championship against MVP last night at SummerSlam in the early kick-off. Crews is now all set to defend his US title once again this Sunday at Payback. Crews will face the dominant force of ‘Hurt Business’ Bobby Lashley at Payback and his title will be on the stake in this match.

Keith Lee took a dig into it and threw down a challenge to Randy Orton for a singles match at Payback which latter accepted it. This could be a dream match for Keith Lee to defeat the 13-times WWE Champion at Payback and shine on main roster.

Nevertheless, ‘the apex predator’ would be in pestilent mood to destroy Keith Lee’s wrestling career in this match and add one more victim into his account. More or less it will a be thunderous contest between these two superstars meet this Sunday.

Women’s dominant forces Shayna Baszler and Nia Jax both formed a Tag team to face Bayley and Sasha Banks at Payback for the Tag team championships. It all happened in the latest episode of WWE Raw when Nia Jax took on Shayna Baszler in a singles competition earlier in the show. As expected, Baszler and Jax ended in a Disqualification match after Nia Jax attacked ‘the Queen of Spades.’

However, despite this rivalry Jax and Baszler took a dig on both Sasha Banks and Bayley at backstage when both of them were bragging against these two dominant forces. Jax and Baszler later confirmed that they will face ‘the Golden Role Models’ for their Tag team Championships this Sunday.

Furthermore, it will be interesting to see whether father and son claim their second victory Seth Rollins and Murphy with in a week or ‘Monday Night Messiah’ Rollins is all set to upset Mysterio(s) again.