WWE News: WWE Reportedly Holding Roman Reigns and Drew McIntyre for A Future Showdown: WWE has finally brought the Undisputed Universal Champion Roman Reigns and Drew McIntyre to confront each other. However, WWE has put both superstars on hold for an official one-on-one match for the Undisputed Universal Title. Follow WWE News and WWE Live Updates on InsideSport.IN

In a recent report from Dave Meltzer from Wrestling Observer Radio, he revealed WWE holding both superstars for future stadium events. WWE will hold two big live events following WrestleMania Backlash. Moreover, the UK’s Biggest Live Event at Principality Stadium is yet to come. Precisely, McIntyre is booked for a big role for its showdown at the Principality stadium in the UK. 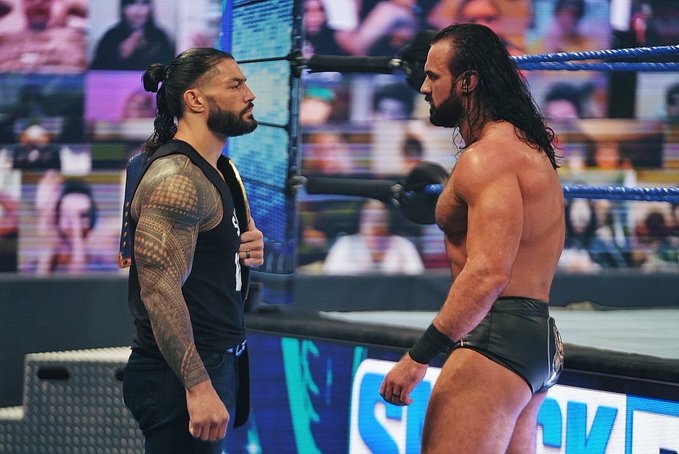 Following WrestleMania Backlash, WWE has two big events, namely Hell in the Cell and Money in the Bank, which could possibly bring the potential match between Roman Reigns and Drew McIntyre.

Roman Reigns and Drew are competing in live events for a long time before WrestleMania 38. At WrestleMania 38, Roman Reigns defeated Brock Lesnar to become the Undisputed Universal Champion. Since then, he is the ruling champion in both Raw and SmackDown brands. WWE fans wondered who will be Reigns’ next opponent until Drew McIntyre showed up to confront the Tribal Chief last week.

On the other hand, the feud between boxing champion Tyson Fury and the Scottish Warrior is also heating day by day as both men desire to compete against each other soon.

The recent episode of Monday Night Raw kicked off with the Undisputed Universal Champion Roman Reigns and SmackDown Tag Team Champions The Usos. While Roman Reigns was addressing the WWE Universe, RK-Bro slipped to the ropes and delivered RKOs to the Usos.

Later, the Scottish Warrior Drew McIntyre showed up on Raw to confront the Tribal Cheif. Soon, both men started their brawl in the ring with the tag team champions. Both teams fought each other with a chaotic situation. However, WWE officials ran in to separate both teams.

At WrestleMania Backlash, The Bloodline will go head to head against the RK-bro and Drew McIntyre in a six-man tag team match.