Wimbledon 2022 LIVE – Wimbledon Tennis Profits: The season’s 3rd GRAND SLAM Wimbledon is still few weeks away but the good news has trickling in for the organizers. The AELTC (Organizers of Wimbledon) has reported $41.8m net profit for the year ending July 2021. This is despite of only restricted entry was allowed for the tournament: Follow Wimbledon 2022 LIVE Updates & Tennis News LIVE Updates with InsideSport.IN

Wimbledon Tennis Profits: The tournament was cancelled in 2020. In year 2021 as well only partial crowds were allowed for the 1st week of the tournament. Despite that the organizers have released BUMPER FINANCIALS for the past year.

Wimbledon 2022 Dates and Schedule: The Wimbledon Championships 2022 will be the 135th time the competition has been held.

Wimbledon 2022 Tickets: The AELTC has already declared that it expects to return to full capacity this year. Wimbledon 2022 ticket prices have been confirmed and with various different types of tickets you can get, the prices vary massively. 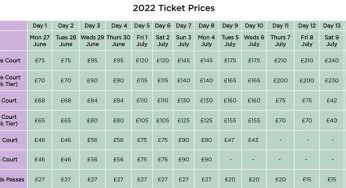 Wimbledon 2022 Defending Champions: Novak Djokovic and Ashleigh Barty won the men’s and womens single competition in 2021. Ash BARTY has already retired and will not play. Novak Djokovic meanwhile is all set to defend their title.