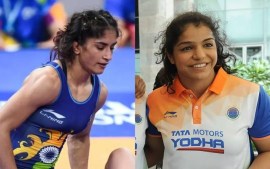 WFI vs Wrestlers: Vinesh Phogat vs WFI – In a startling revelation, a crying Vinesh Phogat on Wednesday alleged that Wrestling Federation of…

WFI vs Wrestlers: Vinesh Phogat vs WFI – In a startling revelation, a crying Vinesh Phogat on Wednesday alleged that Wrestling Federation of India (WFI) President and BJP MP Brij Bhushan Sharan Singh has been sexually exploiting women wrestlers for many years and sought the intervention of Prime Minister and Home Minister for his removal. Follow Latest Wrestling & WFI vs Wrestlers Updates with InsideSport.IN.

Vinesh, a world championship medallist and Olympian, also claimed that several coaches at the national camp in Lucknow have also exploited women wrestlers, adding that there are a few women at the camp who approach wrestlers at the behest of the WFI President.

The 28-year-old though clarified that she herself has not faced such exploitation but claimed that she had received death threats at the behest of WFI President from officials close to him because she dared to draw Prime Minister Narendra Modi’s attention to several issues plaguing Indian wrestling when she met him after the Tokyo Games.

“I know at least 10-12 women wrestlers who have told me about the sexual exploitation they faced at the hands of (the) WFI President. They told me their stories. I can’t take their names now but I can definitely reveal the names if we get to meet the Prime Minister and the Home Minister of the country,” Vinesh said addressing the media after staging a four-hour dharna at Jantar Mantar.

Sitting beside Vinesh, Tokyo Olympics bronze medallist Bajrang Punia said the federation is being run in an arbitrary manner and they will not compete in any international competition unless the WFI President is removed.
In an unprecedented move, the country’s top wrestlers gathered to protest against the “dictatorship” of the WFI President.

“Our fight is not against the government or the Sports Authority of India (SAI). This is against WFI. ‘Yeh ab aar paar ki ladai hai’ (It’s a fight to the finish). We will continue this protest until WFI President is removed,” Bajrang Punia told PTI.

“We will not compete in any international competition until WFI President is removed. This is a fight to save Indian wrestling,” Punia later said while addressing the media. Bajrang’s support staff, including his coach Sujeet Mann and physio Anand Dubey also joined the protest.

“The dictatorship will not be tolerated,” said another wrestler. Singh has been at the helm since 2011. He was elected President of WFI for the third consecutive time in February 2019.