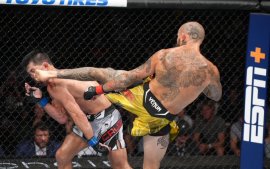 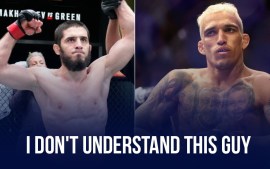 UFC 280 news: Do Bronx mocked by Islam for his inability to… 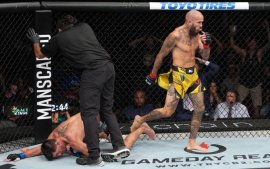 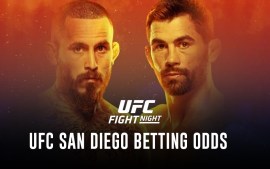 UFC Vegas 55 Live Streaming: Holly Holm vs Ketlen Vieira, Vieira beats Holm via Split-Decision- UFC Vegas 55 came to an end with a controversial split decision victory of Ketlen Vieira over Holly Holm in the main event. While the co-main saw a similar end as Michael Pereira picks up a split-decision victory over Santiago Ponzinibbio, where a section of MMA community believes that Santiago was robbed off the victory. Follow UFC and UFC Vegas 55 Live Updates on InsideSport.IN

07:21- Ketlen Vieira picks up a huge win by Split-Decision

5th and final round here we come! How do you have it scored? 📝 #UFCVegas55 pic.twitter.com/k1nHjCHfuS

07:20- Round 5: Vieira is looking for a finish and goes for it she brings the heavy bombs to Holm. Holly refuses to be on the receiving end of the damage and brings in the famous kicks to rock Vieira and a great exchange to end the final round as the main event goes the distance.

07:14- Round 4: Holly Holm is showing good offence but Ketlen’s counter is just as good. Holm drops Vieira with good shot but she gets back up and counters with a series of shots of her own.

07:07- Round 3: Holm again with the forward pressure and is having a dominant time during the head position, Vieira looking for some counter but gets caught in some of the shots from Holly, Ketlen does lands some power shots of her own by the end of round 3.

07:01- Round 2: Holly Holm is bringing his famous kicks in use, although Vieira answers and slams Holm using a Judo throw and after a while of struggle against the cage Vieira gets her hand under the chin of Holm but she survives somehow.

06:55- Round 1: Both fighters are trying to keep their distance and bring their kicks in use. Vieira attempts the first takedown but Holm is doing a great job on the defence part and now got Vieira’s back is against the wall.

The wait is over – the main event starts now!@HollyHolm vs @KetlenVieiraUFC

06:45- Both women enters the Octagon as the main event is all set to take the center stage.

🗣 BY SPLIT DECISION!@UFCPereira with the biggest win of his career 💪 #UFCVegas55 pic.twitter.com/xqnxqpiqZA

06:29- The Striking Fiesta goes the distance as Michael Pereira take a huge win by Split-Decision.

Who do you think takes it? 🤔 #UFCVegas55 pic.twitter.com/WYbKV8nWCR

06:29- Round 3: Both of them looking for finish and Pereira starts with some heavy shots and Santiago replies with his own. They get into a great exchange of power shots and continue it to end the final round.

06:23- Round 2: Pereira seems more loose and lands some huge power shots. Ponzinibbio is taking the fight to Pereira with some power shots of his own. A great exchange of strikes form both the fighters and as the round reaches its end Santiago lands the first takedown.

06:16- Round 1: Pereira goes in with the offence but fight gets stop for a while because of an unintentional eye poke. The fight resumes and Pereira is on to the offence again and has been more dominant in the round, Santiago fights back but Michael returns with some power shots of his own. A good exchange to end the round 1.

06:08- The Co-main event would be a striking fiesta, both fighters take the center stage.

05:54- Round 1: Dusko shoots for an early takedown but finds himself in the holds of Chidi, although Dusko not only manages to escapes but gets the back control on Chidi but after a struggle between the fighters to get a takedown, Chidi drops Dusko with a highlight reel elbow to win the match in Round 1.

05:37- Both Chidi and Dusko enters the cage, expect fireworks when they go at it.

05:37- Round 3: Both of them are going in for the finish and are involve in a good exchange of strikes. Ricci gets another takedown. They get back on their feet, Ricci shots for another takedown but instead gets drop, although Viana attempts and fails a Guillotine and has her back against the canvas again. The fight goes the distance

05:30- Round 2: Viana is on to the offence again completely utilising her reach, Ricci is trying to close the distance but has failed to get a takedown. Ricci gets the takedown in the start of the fourth round but fails to get past the guard of Viana, Both fighters get back up and Ricci ends the round 2 with another takedown.

05:23- Round 1: Viana starts with the offence and after goof exchange of strikes Ricci goes in for the takedown but Viana tries an Guillotine while getting down, Ricci escapes. Ricci takes Viana down again but found herself in a body triangle, Viana has been doing a lot better in spite of the fact that her back is against the canvas.

05:15- Both Women enters the cage and are ready to put on a show

By SD, Junyong Park takes the win! 👏🐢 What did your scorecards look like?? #UFCVegas55 pic.twitter.com/9V7WyRKRzO

05:01- Round 3: Jun Park is on the attack and brings the forward pressure. Anders has failed in getting a takedown and instead is finding himself in an exchange of strikes. Park goes all out to end the final round.

04:55- Round 2: Park is trying to keep his distance while striking, Anders lands the second takedown but Park get back up and lands some huge shots to rock Eryk. An unintended nut-shot drops Jun and referee resumes the fight after a short break. A great combo from Park but Anders attempts more take down and lands another successful one but fails to take Park’s back and instead gets drop by the end of second round.

04:48- Round 1: Anders goes forward with the pressure and a takedown attempt but instead gets himself caught in a standing Guillotine, although referee separates them. Anders then again goes in for the takedown attempt after couple of jabs. Park has done great job in the defence section. After an exchange of strikes, Anders is back at it again and successfully lands the first takedown but ends the first round with power strike exchange.

[ Tune in on @ESPNPlus ] pic.twitter.com/EFtziYM6dh

04:41- Both Fighters have entered the cage and are ready to go at each other

The match up is gonna be s bout between a great striker (Holm) against an ace BJJ fighter (Vieira) with a good wrestling game too.

Holm possess the ability to put anyone to sleep and has a variety of kicks and strikes in her arsenal and on the other hand Vieira can be dangerous once she takes you down or get hold of you.

The match up is really crucial for both of the Women’s Bantamweight Contenders as winning them would once again give some relevant position in the title picture.

What did the five fingers say to the face? 👋

Where to watch UFC: Holly Holm vs Ketlen Vieira Live Streaming in India on TV?
Sony Sports Network has the broadcasting right for UFC fights in India. Sony Ten 2 (English) and Sony Ten 3 (Hindi) will telecast the main card live on TV in India.

Free: (Only for Jio Customers) – Jio TV app gives access to all the live channels to stream on your mobile or tablet. However, Jio TV is available on mobile/tablet devices only.