Tokyo Olympics Hockey: Belgium knock India out of the semi-finals; India lose 5-2, still in contention for a bronze medal

Tokyo Olympics Hockey- India vs Belgium: Manpreet Singh and the team have been defeated by World No. 2 Belgium: Belgium 5-2 India. India will now play for the bronze medal. Belgium’s drag-flicker Hendricx scored a hat-trick to ensure that the Belgian team goes on to the finals of the Tokyo Olympics. Belgium scored very early in the match but India came back in the 1st quarter by scoring 2 goals and taking the lead. However, that was the only quarter in which India had complete control of the match. The rest of the 3 quarters were controlled by the Belgians. For India, both the goals came in the 1st quarter by Harmanpreet and Mandeep Singh. Belgium will face either Australia or Germany in the finals

The Manpreet Singh-led Indian men’s hockey team suffered a defeat at the hands of Belgium in the first semi-final of the ongoing Tokyo Olympics here at Oi Hockey Stadium North Pitch on Tuesday. Belgium defeated India 5-2 in the semi-final and they will now face the winner of the second semi-final between Australia and Germany in the gold medal match on Thursday.

On the other hand, India will lock horns in the bronze medal match on Thursday with the loser of the game Australia and Germany. The Indian boys started well and looked to keep up the good work, but lost the tempo slightly in the last quarter and that is where the boys from Belgium capitalized.

In fact, the last goal was a case of the Belgium players taking advantage as India withdrew goalie Sreejesh and brought in a field player. Loick Luypaert gave Belgium an early lead in the match as he registered a goal in the starting minutes of the first quarter and as a result, India was put on the back foot straight away.

However, India struck back as Harmanpreet Singh and Mandeep Singh scored goals in quick succession, and as a result, India gained a 2-1 lead in the first quarter.
In the second quarter, Belgium got the equalizer as Alexander Hendrickx successfully converted a penalty corner, and it brought the scoreline level to 2-2. No more goals were scored in the second quarter, and the scoreline remained level.

The deadlock was not broken in the third quarter as well, and as a result, heading into the last 15 minutes of the game, both India and Belgium were highly tensed. In the fourth quarter, it was Belgium who struck first as Hendrickx scored his second goal of the match, giving Belgium a 3-2 lead with more than 11 minutes still left to play.

A few minutes later, Hendrickx got his hat-trick as he converted from a penalty and hence, Belgium gained a 4-2 lead. In the end, Belgium managed to hang on and the side registered a victory, progressing ahead to the finals, their second successive final appearance.

Earlier, India had defeated Great Britain 3-1 in the quarterfinals on Sunday to enter the last four stage

@8:42 AM: 3-time FIH Goalkeeper of the year Vincent saves it

@8:41 AM: Just a minute left, India does not look dangerous at all

@8:40 AM: Sreejesh has been called out. India is going to give all they’ve with just 2 minutes left

@8:39 AM: Just 3 minutes left in the match now. Belgium is in complete control.

@8:38 AM: Belgium is not even allowing India near the ball. They are passing the ball so well. They are managing the game now

@8:36 AM: No other way for India than to just take risks and try to knock one goal as soon as possible. Belgium is defending really well and with a 2-goals lead, they are taking their time

@8:33 AM: India might be in deep trouble. Umpire is taking a referral to check whether Sreejesh was not behind the defender while the ball was goal bound. PENALTY STROKE FOR BELGIUM

@8:32 AM: The ball hits the body of Surender. Belgium receives its 5th back-to-back penalty corners.

@8:31 AM: India just cannot get out of the press. They give another PENALTY CORNER TO BELGIUM

@8:29 AM: Belgium missed the opportunity this time but they’ve received another PENALTY CORNER

@8:27 AM: 9 minutes left in the match! Harmanpreet lost possession to the Belgian press.

@8:26 AM: India is losing the ball very easily. Manpreet Singh is back on the pitch

@8:24 AM: SAVED BY SREEJESH! Another PENALTY CORNER NOW.

@8:23 AM: Another block by Rohidas, he has been an amazing rusher for India. Another PENALTY CORNER FOR BELGIUM

@8:21 AM: Lalit is looking really fresh! He almost earned India the penalty corner

@8:19 AM: GREAT CHANCE FOR INDIA! Gurjant played a brilliant ball ahead but Lalit was unable to trap the ball

@8:13 AM: Belgium is looking dangerous in the last few minutes of the 3rd quarter. India has been on its toes

@8:10 AM: Great stick work by Dilpreet, however, he is stopped by the defense.

@8:08 AM: Brilliant block by the 1st Belgian rusher. He blocked a solid shot.

@8:07 AM: PENALTY CORNER FOR INDIA! Belgium lose its referral

@8:05 AM: Sumit pushed inside the circle and India is given a PENALTY CORNER. 7:04 left in 1st quarter

@8:02 AM: Even with more circle penetrations, India has not managed to be as efficient as Belgium. Both the Belgian goals have come by penalty corners.

@8:01 AM: India seems to have changed tactics in the 3rd quarter. They are trying to penetrate the ball through the middle instead of from the wing.

@7:47 AM: 4 seconds to go and the last attempt of the 2nd quarter is saved by Sreejesh.

@7:45 AM: GREAT CHANCE BY INDIA! The Belgian goalkeeper tried to cover the ball by getting on it. India has been given the PENALTY CORNER

@7:43 AM: India keeping 54% of the possession. They had it going really well for a few minutes in the 2nd quarter.

@7:43 AM: NOT A PENALTY CORNER. The ball struck Rohidas above the knee. India has conceded 7 penalty corners so far.

@7:42 AM: Well blocked by Amit Rohidas and Belgium gets another penalty corner.

@7:40 AM: 4:40 left in the 2nd quarter. India still keeping possession, trying to work the ball through the Belgian defense.

@7:37 AM: India has been in the Belgium circle for a while now. India takes the referral for a push in the circle.

@7:36 AM: GREAT CHANCE FOR INDIA! Just required a tiny touch from Dilpreet and that would have been the advantage for India.

@7:34 AM: India is now keeping possession and attacking from the wing! GREAT SAVE by the Belgium goalkeeper. India is looking dangerous now

@7:33 AM: Belgium now has the momentum and they are penetrating through the Indian defense easily.

@7:32 AM: GREAT SAVE by Sreejesh. It was high and Sreejesh was placed perfectly

@7:30 AM: PENALTY CORNER FOR BELGIUM. Too many penalty corners being conceded by the Indians.

@7:29 AM: India is back on the attack immediately. The Belgium goalkeeper was quick to rush out.

@7:28 AM: 3 back-to-back penalty corners and Belgium unable to score even after India was down to 3 men.

@7:28 AM: Good defending but it is another PENALTY CORNER

@7:27 AM: Rupinder Singh broke the line and the Indians will defend with 3 defenders.

@7:25 AM: India is keen on keeping possession at the start of quarter 2. They are switching the wings and trying to keep the Belgium players away from the ball.

@7:19 AM: Great defending by Rohidas, a much-needed interception in the circle.

@7:18 AM: India has scored at least 3 goals in every match except against Australia.

@7:17 AM: It was a great save by the Belgium goalkeeper. This has been a great spell of attacks by the Indians.

@7:13 AM: What an amazing comeback from India considering the fact that they conceded very early in the match. Great character!

@7:12 AM: GOAL!!! ANOTHER GOAL FOR INDIA AND THEY TAKE THE LEAD! Mandeep Singh scores an absolutely delightful goal to put India ahead. India 2-1 Belgium.

@7:10 AM: GOAL!!! Harmanpreet Singh scores his 5th goal. None more important than this one in this campaign. He draws India level. India 1-1 Belgium with 8 minutes to go!

@7:09 AM: India tried a variation but Vivek was unable to stop the ball. ANOTHER PENALTY CORNER FOR INDIA

@7:09 AM: PENALTY CORNER FOR INDIA! The referral is retained.

@7:08 AM: It was a lifted ball in Belgium circle, India takes a referral!

@7:06 AM: Belgium knows that India is under pressure and they are taking full advantage of that. They are pressing up high, using a 3-men press.

@7:05 AM: Belgium always has an open man to pass the ball to. They are easily tearing the Indian defense

@7:04 AM: India is stunned after conceding a goal so early. However, they have time on their side.

@7:02 AM: GOAL!!! Belgium score with its first penalty corner. Luypaert puts his name on the scoresheet very early. India 0-1 Belgium

@7:01 AM: Counter by Belgium and they win a PENALTY CORNER with their first attack

@7:01 AM: India has started really aggressively. Hardik helped penetrate the Belgium circle in  the first minute.

@6:59 AM: India is starting from left to right in the first 2 quarters.

@6:58 AM: Belgium striker Hendricx has 11 goals from penalty corners and is someone the Indian defense need to keep an eye on.

@6:52 AM: Just a few minutes away from the match now. The players are ready to talk on the pitch.

India has a decent record against Belgium and has won all three games when they toured the country back in 2019. That included a 5-1 thrashing of Belgium.

India has won four of their last five games against Belgium.

Are you ready to cheer for 🇮🇳 Men’s #Hockey team as they take on #Bel in their semi-final match today?

It’s going to be a thrilling game, so stay tuned for updates and keep sending in your #Cheer4India messages.#Tokyo2020 #Olympics pic.twitter.com/Fp8RFSOk1a

@6:41 AM: India has sent a well-balanced squad in the Olympics. 10 different players have scored for India in their Tokyo Olympics campaign.

In the first #Hockey semi-final game at @tokyo2020 we will have two of the best goalkeepers against each other.
PR Sreejesh vs Vincent Vanasch

We re-visit some of the saves they made when India met Belgium at the 2020-21 #FIHProLeague.@BELRedLions @TheHockeyIndia

@6:30 AM: Just 30 minutes to go as the Indian men’s hockey team takes on World No. 2 Belgium for a place in the finals of the Tokyo Olympics!

Olympics Hockey SemiFinals LIVE – India vs Belgium LIVE: India made a stunning comeback in Tokyo Olympics after a heavy 7-1 defeat at the hands of Australia. They showed great character to win the remaining 3 games of their Pool, which helped them finish 2nd in Pool A. They also gave a glimpse of how strong their defense is, after having saved 8 penalty corner attempts in the game.

On the other hand, Belgium also comes into this game after defeating Spain 3-1 in an inspirational comeback. Belgium finished top in Pool B, they had the same wins as India did in Pool A (P5, W4, D1, L0).

Not only this, Belgians have scored 29 goals in their Olympics campaign, which means that the Indian defense will have to be on top of their game. 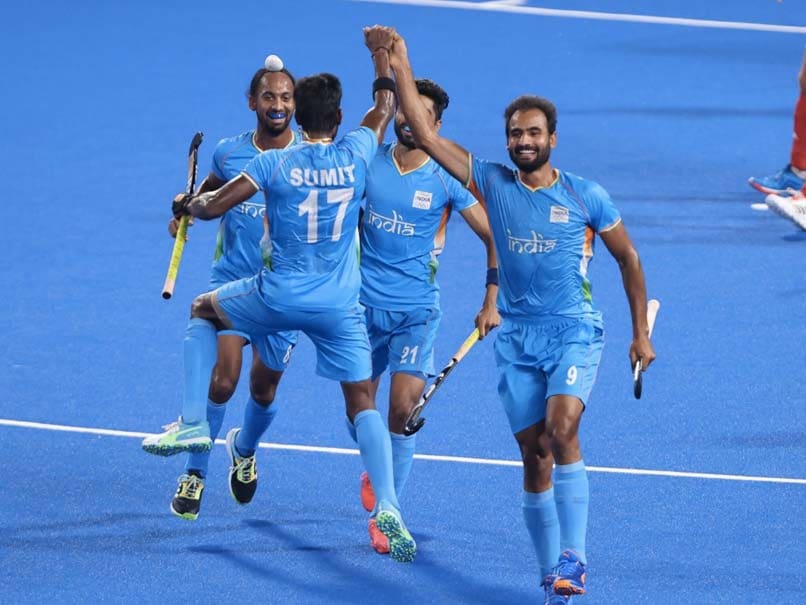 Belgium beat Spain 3-1 in the quarterfinals

Live streaming of the India vs Belgium men’s Olympics hockey match will be available on Sony Liv. Live broadcast is subject to Sony & LIVE Updates can be followed on InsideSport.co