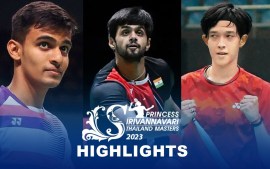 It was curtains for Mithun Manjunath, who had incredibly defeated fellow Indian Kidambi Srikanth in the previous round. The 24-year-old lost the match to Ireland’s Nhat Nguyen 10-21, 21-18, 16-21 in one hour and 12 minutes after fighting back to win the second game.
Ashmita Chaliha, who had beaten Thailand’s Busanan Ongbamrungphan, also failed to advance in her round of 16 matches to Han Yue of China 9-21, 13-21 in 25 minutes.

Earlier, Ace Indian shuttler Saina Nehwal advanced to the quarterfinals of the ongoing Singapore Open 2022, defeating China’s He Bingjiao in the second round of the women’s singles category.

Nehwal defeated her Chinese counterpart by 21-19, 11-21, 21-17. She was off to a good start and won her first game. But Bingjio defeated her by a huge margin in the second game. Nehwal prevailed in the closely-contested decider, booking her slot in the final eight of the competition.

On the other hand, the Indian duo of Arjun MR and Dhruv Kapila won their second-round match in the men’s doubles category against the Malaysian duo of Goh Sze Fei and Nur Izzuddin and confirmed their slot in the quarterfinals.

Earlier on Thursday, Indian Olympic medalist PV Sindhu defeated Vietnam’s Nguyen Thuy Linh in the second round of the women’s singles category to reach the quarterfinals of the ongoing Singapore Open 2022.

Playing on court 1, Sindhu won her match 19-21, 21-19, 21-18. She got off a bad start, losing the first game closely. The Indian however kept her calm in the next two games and won them. The match was an extremely close-contested one and lasted one hour, six  minutes.

The action continued on court 2, where Prannoy HS also won his first-round match against Taiwan’s Chou Tien-Chen and proceeded to the quarterfinals on Thursday.