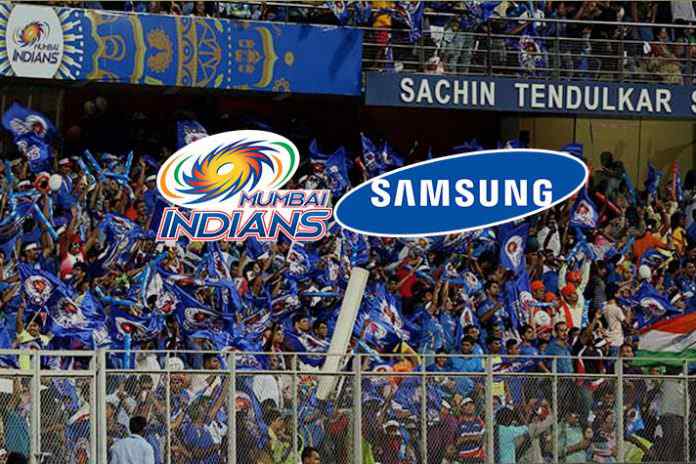 Samsung is heading to graduate from the official partner category to the lead sponsor of Mumbai Indians. Insidesport has reliably learnt the Korean brand and the Reliance Industries-owned franchisee have closed in on signing the deal for Indian Premier League Mumbai team’s jersey sponsorship.

The Mumbai Indians and Samsung have, according to sources, agreed on a long-term deal @ ₹25-26 crore per annum. Signings and announcements are expected soon. “Samsung has shown unprecedented keenness to invest its marketing resources on cricket. The franchisees too are excited with over 50% gains for the property in comparison to last year,” the source has told Insidesport.co.

Videocon has been the most prominent brand to appear on the Mumbai team jersey till date. Videocon logo has been printed on Mumbai Indians players shirt fronts for six out of the nine years for which the IPL franchisee has been able to get a partner for the most precious kit sponsorship property. Idea was the first brand to appear on front of Mumbai team kit front in 2009. There was no jersey sponsor for the team in the inaugural year. Next came Videocon, to be replaced by Hero Honda for the 2011 and 2012 seasons. Thereafter, it has been Videocon d2h for the next five years.

The reigning IPL champions, Mumbai Indians have been the most successful IPL team till date, having won the league final in 2013, 2015 and 2017 along with two Champions League T20 titles in 2011 and 2013.

The team, to be led by Rohit Sharma, has engaged Sri Lankan veteran Mahela Jayawardene as the head coach and one of their own veterans, Sri Lankan Lasith Malinga as a bowling mentor. The unorthodox Sri Lankan speedster, who was not retained or picked by the Mumbai Indians at the auction this year, has in the past been credited with shaping the career for fellow Mumbai Indian bowlers like Jaspreet Bumrah.