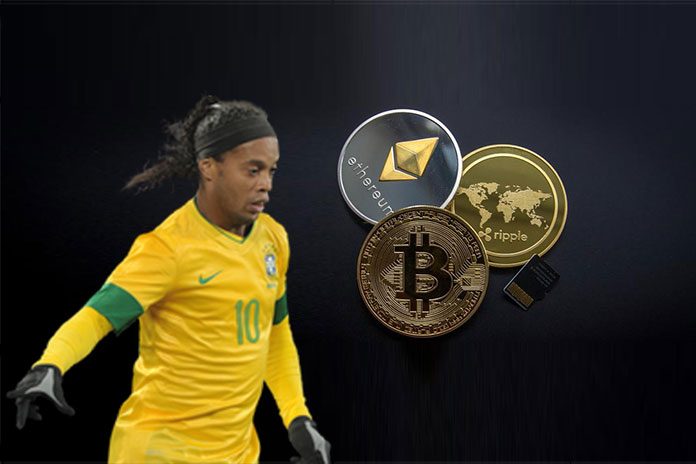 Brazillian football legend Ronaldinho has announced the launch of his own personalised cryptocurrency – Ronaldinho Soccer Coin (RSC) – as a part of wider ambitions to foray into global esports market.

The 2005 Ballon d’Or award winner, with this move, will join the elite list of other global sports celebrities who have launched their own cryptocurrency including Manny Pacquiao, Floyd Mayweather, James Rodriguez, Michael Owen and Stephen Curry.

The 38-year old’s cryptocurrency project aims to establish a football academy, host amateur and global league matches around the world, develop and operate a betting platform and marketplace.

It will also invest in developing digital VR stadiums that will analyze player skills and compile a blockchain database with which to create new teams. All the above ventures will be assisted by technology from Chinese company NEO.

The stadiums will be developed in 300 locations around the world, with facilities planned for countries in Africa, South East Asia, and the Middle East over the next three years.

The Ronaldinho Soccer Coin (RSC) has been developed concurrently with World Soccer Coin, a Malta-based company, after a partnership deal, and is now in the initial coin offering phase with 350 million RSCs made available for consumers to purchase.

The Ronaldinho Soccer Coin was recently known as the World Soccer Coin, from a Malta-based company, before taking on the partnership with the famous football player. Ronaldinho had tweeted about the ICO of the project this year in February.

“Ever since I thought of retiring, I started to think about my life after retirement,” said Ronaldinho of his decision to partner with the project. “I wish to contribute to the world as much as I can.”

Future plans of the project state that two stadiums will be completed in July-end in Asia, with operations to commence before the end of the year. An alliance has also been formed with five existing stadiums in South East Asia.

The project continues with the further development of the VR and virtual services technologies that will enhance the eSports aspect of the project, and the Ronaldinho Academy will be launched in March 2019.

Stadiums in the Philippines, Vietnam, and Thailand will be operational in 2019 and an eSports tournament will be held in Bangkok in July 2019. All services in terms of betting, enrolling in the academy, or participating in the VR stadium eSports, will be secured by NEO technology.