The ManBetX agreement will see the global betting brand act as the sponsor of the LaLiga club within the sports betting category for the or two seasons (2018/19 and 2019/20).

Real Madrid director Emilio Butragueño said, “It’s a great honour for us to link our name to such a highly prestigious international brand leader. This union will further enable us to move closer to our fans in Asia.”

Xavi Wong, Sponsorship Manager of ManBetX, said, “Real Madrid´s history throughout the years speaks for itself, proving to be the best club in the world, as ManBetX is the best within its field”.

Real Madrid, along with its Spanish rival Barcelona, has also extended its sponsorship deal with another online betting company Tempobet this week.

The ‘six-figure’ deal will allow Tempobet to advertise at the away games of the two LaLiga giants for the remainder of the 2018/19 La Liga season, except in matches against Sevilla and both El Clasico fixtures – the first of which takes place next month. 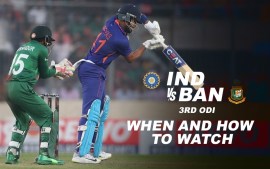 IND vs BAN Live Streaming: When & How to watch India vs…