NZ vs SA Live Score – 2ND Test LIVE Updates: South Africa has ended Day 1 of 2nd Test with a score of 238/3 courtesy brilliant maiden test ton by Sarel Erwee. Erwee scored 108 and gave Proteas team solid start against the Kiwi pace attack. After winning the toss and electing to bat 1st, Erwee along with his captain Dena Elgar stitched 111 runs opening wicket stand for the team that was all out for just 95 & 111 in the 1st Test. Follow New Zealand vs South Africa 2nd Test Live Updates with InsideSport. IN

Erwee, Elgar Century Partnership: 32 year old Erwee playing only his 2nd test was at his best as he made Kiwi fast bowlers completely ruderless with his disciplined batting.

Erwee and Elgar added 111 runs for the opening wicket. The partnership between Elgar and Erwee is South Africa’s best opening partnership in 16 innings, since December 2020.

New Zealand finally got the much needed breakthrough after Tim Southee bowled out Elgar for 41.

SA needs victory in the test to draw the series. While a victory or draw for New Zealand can give them their 1st ever test series victory over South Africa.
On a surface with noticeably less green grass, New Zealand’s attack were not able to recreate the seam movement they got in the first Test and bowled a little shorter too.

NZ vs SA Live Score: A positive result in 2nd test can bring DOUBLE DELIGHT to the host New Zealand. With a victory in the 2nd test match, Kiwis can win their first ever test series against South Africa. At the same time they will also reclaim the mantle of number one in the world. 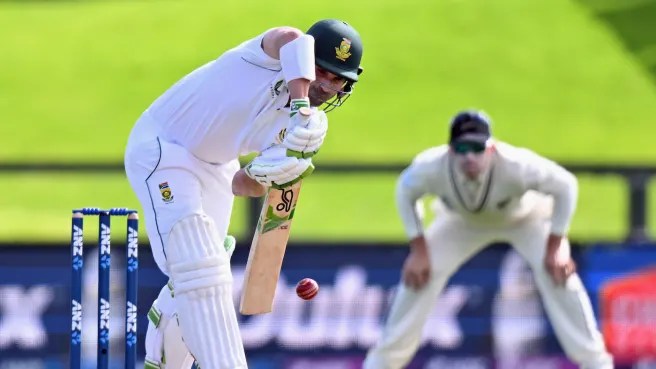 How To watch NZ vs SA Live Streaming in your country, India?
Fans from India can watch it live at Amazon Prime Video.