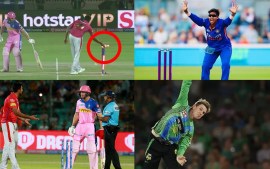 Mankad Dismissal DRAMA: Pakistan Women Under-19 cricketer Zamina Tahir executed a “Mankad” to run out Rwanda’s Shakila Niyomuhoza at the non-striker’s end in…

Mankad Dismissal DRAMA: Pakistan Women Under-19 cricketer Zamina Tahir executed a “Mankad” to run out Rwanda’s Shakila Niyomuhoza at the non-striker’s end in the ongoing ICC Women’s U-19 T20 World Cup on Sunday. The incident happened during the game between Pakistan and Rwanda. Meanwhile, Daniel Christian of the Sydney Sixers, has also joined the “Mankad” trend in cricket as he threatened to attempt the contentious dismissal during Sunday night’s Big Bash League game at the SCG. Follow cricket NEWS & LIVE updates with InsideSport.IN

Zamina uses “Mankad” to run out Niyomuhoza – On social media, a clip of Zamina using the especially controversial method of dismissal has gone viral. Zamina is seen in the video breaking the bails at the non-end striker’s and then approaching the umpire to request the wicket. As soon as the umpire raises his finger to award it, Niyomuhoza returns to the pavilion for a 2-ball duck.

Personally I’d change two laws. 1. Ban the Mankad and make it not out. 2. If the batsman leaves the crease before the ball leaves the bowlers hand it’s a short run and chalked off.

Problem solved and it goes back to being a fair contest between bat and ball.#Mankad #ICC pic.twitter.com/IH2KbzjYir

Dan Christian’s Warning to Eskinazi – With 17 runs needed from the final eight balls in the penultimate over of the Perth Scorchers run chase, Christian paused in mid-delivery stride and turned toward non-striker Stephen Eskinazi, who was unbeaten on 62 at the time. Christian yelled at the England player, “That’s your warning mate, that’s your warning.” Before Christian’s warning, Eskinazi had just barely managed to get back for two runs at the non-strikers’ end on three consecutive deliveries.

Rather than go right for the stumps, Dan Christian offered a warning last night! #BBL12 pic.twitter.com/tCXsfmw8qo

Australian Test captain Pat Cummins recently stated that if a warning has been given and non-strikers continue to leave early, he would be glad for his team to execute a Mankad. His remarks followed a confrontation between Mitchell Starc and Theunis de Bruyn during the second Test match between Australia and South Africa. “We can warn them a couple of times but if they keep taking the mickey…” Cummins said.

Christian’s actions on Sunday night caused controversy among cricket fans. Many believed that instead of warning Eskinazi, he should have simply sent him outside to normalise the dismissal. 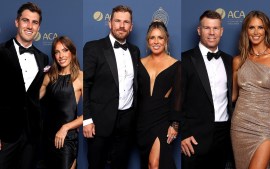