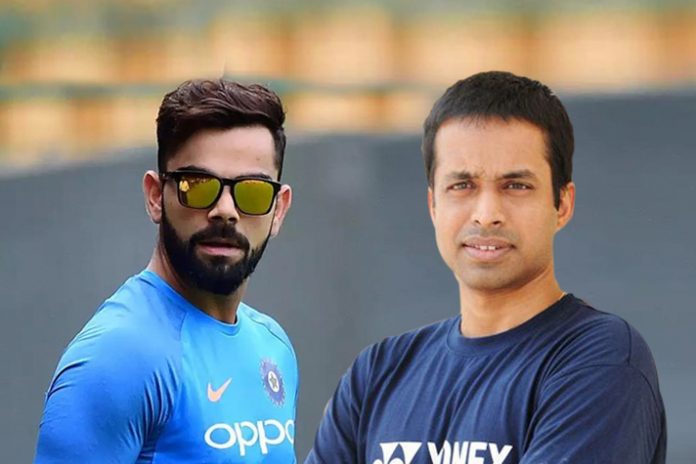 Virat Kohli is the only active sportsperson in Indian Express’ 100 most powerful Indians’ list. The #ie100 predominantly dominated by politicians has got a bleak representation from the sports world. The only other representation from sporting fraternity is the national badminton team chief coach Pullela Gopichand.

The list obviously led by Prime Minister Narendra Modi as the most powerful Indian for the year, has the Indian cricket team captain and country’s most powerful brand icon in the 20th position, followed by External Affairs Minister Sushma Swaraj.

The list has positioned the celebrities on the “Why” and the “Power Punch” parameters, while also describing the “What Next” challenge and the not so serious side of the powerful personality as “By The Way”.

The prospect of surpassing Sachin Tendulkar’s record of 100 international centuries is described as the “Why” factor for keeping Kohli in the No. 2 position ahead of the likes of the Indian Army Chief, Mumbai Indians IPL franchisee owner Neeta Ambani, Amitabh Bachchan, Rajnikanth, the Khans – Salman and Shah Rukh – Deepika Padukone and the Bollywood Queen Kangna Ranaut.

Having won 21 of the 35 Tests as captain has also weighed in Kohli’s favour to get him the 20th ranking. The comeback win in the Test series against South Africa, after having lost the first two, is described as Kohli’s Power Punch.

The next challenge is more overseas Test wins, particularly in England, where the team is scheduled to tour later this year. Kohli would also want to set right the only blemish on his batting card — he averages a woeful 13.4 in England.

BY THE WAY, on his cheat day, the fitness freak Kohli seeks out chhole-bhature at a favourite joint in Delhi’s Rajouri Garden, states the report.

Badminton Association of India president Himanta Biswa Sharma is another representation from sports fraternity. Though the career politician has gained a place in the elite list on the strength of ensuring Bharatiya Janata Party’s rise in North-East India.

Chief National Coach of the Indian badminton team, Pullela Gopichand is the only sportsperson other than Kohli to find a mention in the list. He gets the honours for “shepherding arguably the most high-achieving group of sportspersons in Indian sport — Saina Nehwal, P V Sindhu, K Srikanth, H S Prannoy and Sai Praneeth”.

Having guided Sindhu to the finals of the biggest tournaments in women’s singles —Olympics, World Championships and Tour Finals – has been described as the Power Punch for Gopichand, who is next expected to “assume a bigger role in sports administration at both the national and international stage”

Star India Chairman and CEO Uday Shankar is the lone representation from the broadcast industry, making his maiden appearance in the elite list for a 69th place on the strength of winning the ₹16,347.5 crore Indian Premier League bid for his broadcast network.

IMG Reliance chairperson Neeta Ambani has been placed in the 66th position, three rungs above Uday Shankar, IMG-Reliance had influenced FIFA to recognise the Indian Super League as an official football tournament.