ISL: A brilliant brace from Javi and a late goal from Aridai powers Odisha to a 3-1 win over Bengaluru FC in the season opener: Two early goals in either half and a clean late strike ensured Odisha FC register a comfortable 3-1 win over Bengaluru FC, here in a 2021-22 Indian Super League (ISL) match at the Tilak Maidan Stadium in Vasco on Wednesday. Interestingly, this is the first time Odisha FC has beaten the Blues in the ISL. Follow ISL 2021-22 LIVE and all Live Updates on InsideSport.in

It was Javi Hernandez (3′, 51′) who led the charge for Odisha with a brace. While he rode some luck for his first goal, the second was nothing short of breathtaking from just outside the box. Alan Costa (21′) scored one for Bengaluru as Sunil Chhetri failed to convert a penalty kick. Aridai Suarez (90 + 4′) sealed the deal for Odisha with a sublime goal adding more sheen to the win. Bengaluru left Cleiton Silva on the bench while young Roshan Singh was given a runout at right back. Odisha lined up in a 4-3-3 formation with Kiko Ramirez’s Spanish influence evident.

It was a horrible start for India goalkeeper Gurpreet Singh Sandhu, who ventured out of his box in an attempt to clear a long punt from his counterpart Kamaljit Singh. A comedy of errors ensued as his mistimed clearance fell right for Javi Hernandez who lobbed the ball over the keeper and defenders into the net for Odisha to draw first blood.

Shell-shocked Bengaluru was still picking up the pieces after the opener when Jonathas, Odisha’s high-profile signing in the summer found Nandhakumar Sekar with a one-two but the latter squandered the opportunity with a tame shot in the 12th minute.

Odisha captain Hector Rodas had nodded the ball out for a corner kick which Roshan swung in from his left foot. Brazilian defender Alan Costa made use of his towering physique to rise the highest and head the ball into the net for the equaliser.

The former champions looked comfortable after their goal as the Odisha defence, led by Rodas was tested on multiple occasions before halftime but remained unscathed.
Five minutes into the second half, Jonathas was brought down by Udanta Singh on the edge of the box. Javi’s left foot freekick left the entire Bengaluru wall for dead, as the Bhubaneswar side restored the lead.

Cleiton Silva was called upon and won a penalty at the hour mark. Sunil Chhetri stepped up only to be denied by the keeper but the follow-through, which was netted by Cleiton, was disallowed as he encroached the box before the shot was taken. 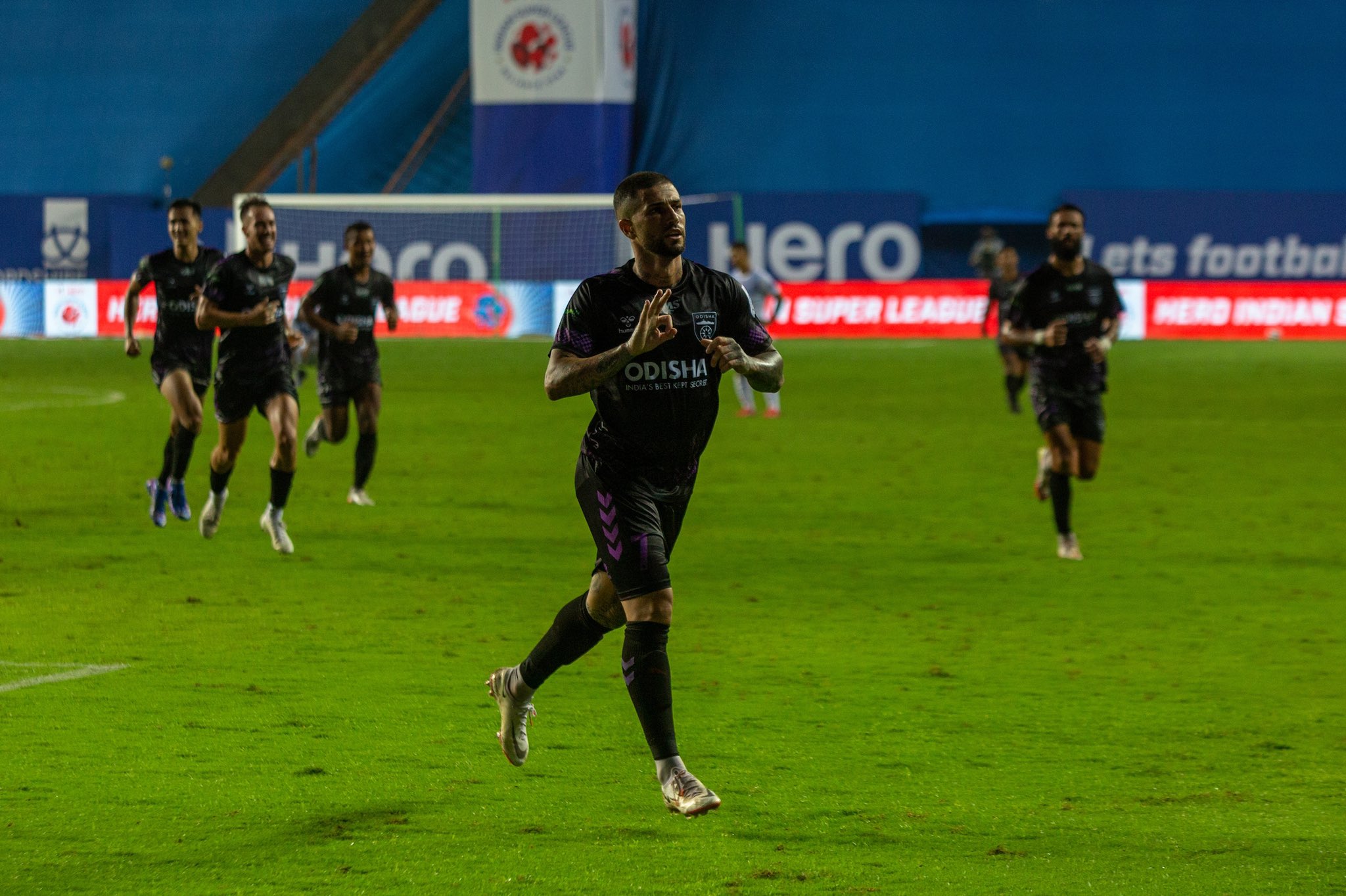 Bengaluru kept on pressing for an equaliser but that was not to be. Striker Prince Ibarra sliced a cross from Alan Costa over the bar as Sunil Chhetri struggled to mark his presence in the Odisha box.

It was then Spanish Aridai Suarez who piled on more misery on the Blues in the final minutes of the match with clinical strides and a deft touch to find the back of the net to seal the match for Odisha FC.

Odisha, who finished bottom last season start their campaign with an encouraging victory while Bengaluru, who have three points from two games, would like to go to the drawing board and focus on their defence.

ISL: A brilliant brace from Javi and a late goal from Aridai powers Odisha to a 3-1 win over Bengaluru FC in the season opener