The IPL GC recently announced new deals with RuPay and Swiggy Instamart as central sponsors for IPL. The board for the first time has filled all 9 sponsorship slots for the season.

“This clearly shows the value of IPL as a brand. We are absolutely delighted with these new sponsorship deals. This year we have clocked the highest ever sponsorship revenues. For the record for the 1st time we will be crossing 1000 cr revenue mark from IPL Sponsorships for a single season “, confirmed BCCI Secretary Jay Shah to InsideSport.

BCCI to earn 1000 Crore from IPL Sponsors – Where is the increase coming from? The big increase is coming from two sources for the BCCI. First of all the number of sponsors have increased this year.

The IPL GC recently announced new deals with RuPay and Swiggy Instamart as new central sponsors for IPL. The board now has 9 top brands on board for IPL and all slots for sponsorships are filled.

According to available information, the deal with RuPay & Swiggy is in a range of 48-50 Crores per annum.

The second gain for the BCCI is coming in from the TITLE SPONSORSHIP deal. Though TATA Group is paying 335 Cr which is less than what VIVO was paying – but still the BCCI will earn almost 30-40% more.

The sources informed InsideSport that BCCI will not only get the contracted amounts from VIVO but will also get PRO-RATA payments of increase in the number of matches for IPL 2022 & IPL 2023.

VIVO had agreed to pay 484 Cr for IPL 2022 & 512 Crores for IPL 2023 on account of increase in the number of matches during the two forthcoming seasons.

VIVO was suppose to pay 996 Crore to the BCCI over next two seasons. Now with TATA Group pledging just 670 Crores for the same period, the deficit will be borne by VIVO.

Not only this – but as per the contractual understanding, VIVO will also pay ‘TRANSFER FEE’ to the BCCI as was the case when OPPO had transferred their rights to BYJU’s.

All this will rake in 600 Crore plus for BCCI from the TITLE SPONSORSHIP slot. 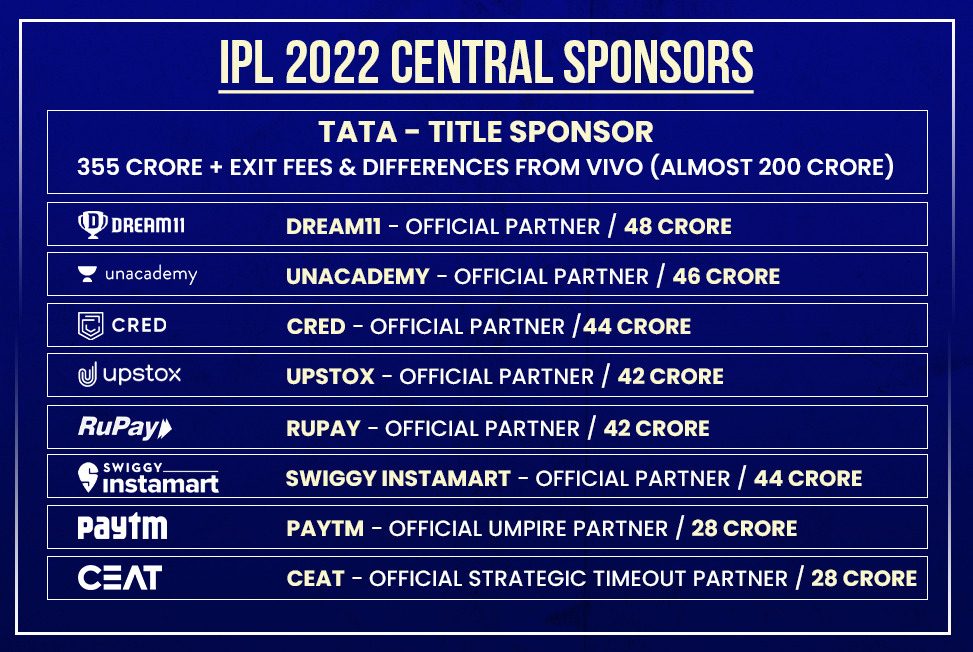