By  Sreehari Menon Updated:  November 9, 2021 03:05:15 pm
IPL 2021 Phase 2: Rashid Khan & Mohammed Nabi to play IPL in UAE despite Taliban’s Afghanistan takeover – Afghanistan is in turmoil as the Taliban has taken over control over the state and the nation is heading towards an uncertain future. The politics have naturally affected the sporting realm and doubts remain on the future of Afghanistan cricket after the giant strides over the past decade. This includes the likes of Rashid Khan and Mohammed Nabi, who are part of the Sunrisers Hyderabad setup.
Rashid Khan and Mohammed Nabi are currently in the UK, participating in The Hundred. While Rashid is playing for Trent Rockets and Nabi is representing London Spirits. As per reports, the BCCI is keen for the Afghanistan cricketers to participate in the IPL 2021 Phase 2 and are keeping a keen eye on developments. A BCCI source told PTI, “It is too early to comment but we are keeping a watch. For us, nothing changes and we expect Rashid and other Afghan players would be part of IPL.”

Today let us take some time to value our nation and never forget the sacrifices. We hope and pray for the peaceful , developed and United nation INSHALLAH #happyindependenceday 🇦🇫🇦🇫 pic.twitter.com/ZbDpFS4e20

IPL 2021 Phase 2: SRH confirm Rashid Khan, Mohammed Nabi’s availtily in UAE
However, SRH have put all those claims to rest, revealing that the Afghanistan duo will take part in the upcoming IPL 2021 Phase 2. Speaking to ANI, Sunrisers Hyderabad CEO K. Shanmugam said the two Afghanistan players will be a part of the IPL in the UAE. “We haven’t spoken on what is happening at present, but they are available for the tournament,” he said.
Also Read: IPL 2021: Indian Army hails CSK skipper MS Dhoni’s respect for armed forces, says, ‘MS Dhoni and armed forces are hands in glove

Shanmugam further revealed that the team will depart for the UAE at the end of the month, August 31. However, it remains to be seen how Rashid Khan and Mohammed Nabi plan to travel to the UAE next month. It is unclear whether the duo will return home after the completion of The Hundred on August 21 despite having families back home. Should they stay back in the UK, BCCI could perhaps arrange their travel in the same charter as the Indian players who are currently on tour in England.

The duo have previously made their resistance to the Taliban well known and had pleaded with the world leaders to save their country from the chaos after the Taliban continued their capture of Afghanistan. Both cricketers, who play for the Sunrisers Hyderabad in IPL 2021, claimed that Afghans wanted peace signalled their worries on social media. 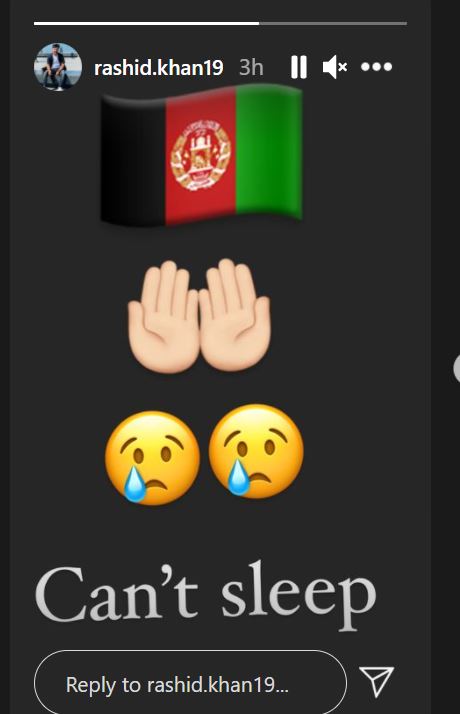 future, as their homes are being seized. I appeal to the leaders of the world; please don’t let Afghanistan go into chaos. We need your Support. We want Peace.#PeaceforAfghanistan #FreedomforAfghanistan #StopKillingAfghans

The BCCI is expected to speak with the Afghanistan Cricket Board on the situation who also lost their stadiums further hurting their preparations for the upcoming T20 World Cup. As per ICC’s FTP schedule, Afghanistan are scheduled to tour Sri Lanka for six white-ball games in August but the final schedule has not been announced yet.