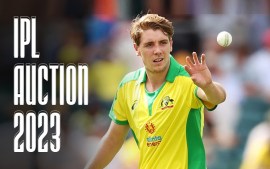 By  Kunal Dhyani June 17
IPL 2021 – Tri-Series during IPL 2021 Phase 2? IPL 2021 Phase 2 is already struggling to get commitment from the foreign players and international boards & now some more trouble is brewing for the world’s richest league. According to news coming in from Australia, Cricket Australia is planning to organize T20 Tri-Series involving the West Indies & Afghanistan in the month of October. Not only this, but Australia chairman of selectors Trevor Hohns has declared that he expects the country’s IPL players to forgo the high-profile T20 league for the sake of T20 Series.
Also Read: IPL 2021: UAE suspends all flights from India till July 6th,…
If such a series goes ahead at the time of IPL, it will mean that all high profile cricketers from 3 nations i.e Australia, West Indies & Afghanistan will not be available for IPL 2021 Phase 2.
Should that tri-series go ahead, it might potentially clash with the final phase of the IPL which is expected to resume in the UAE from mid-September, and Hohns made it clear where Cricket Australia expected players’ priority to lie.
“Around that time of the year, I would certainly hope so (that players forego the IPL for national representation),” Hohns was quoted as saying by cricket.com.au.
The news has also come in as bolt from blue for the BCCI who is completely unaware of such a move by Cricket Australia. “We don’t have any information about this Tri-Series. We are sure these players will be available for IPL”, said one of the BCCI official currently in Mumbai.

Seven Australian cricketers – David Warner, Pat Cummins, Glenn Maxwell, Jhye Richardson, Kane Richardson, Marcus Stoinis and Daniel Sams — who recently played in the IPL have pulled out of the twin tours of Bangladesh & West Indies as on Tuesday selectors announced the squad. On the other hand Steve Smith has been rested to fully recover from an elbow complaint which flared during the IPL.
Horns is confident that for sake of Australia and its T20 World Cup campaign players will forgo IPL.
“However, it will certainly depend on their commitments and what we think they should be committing to regarding their Australian commitments at that time.”
Hohns, however, added that the matter “would have to be addressed in the future”.
“We haven’t looked at that yet and we haven’t heard from our players at this stage,” he said.
Hohns also hinted that there is no guarantee that some of the IPL returnees who have opted out of the squad for the white-ball tours of West Indies and Bangladesh would get an automatic spot in the T20 World Cup.
“That will be an interesting discussion for us, there’s no doubt about that, depending on performances in the West Indies particularly by some of the extra inclusions for this tour,” Hohns said.
Also READ: IPL 2021: MI’s Hardik Panyda jets off for vacation with wife…
“If somebody were to really shoot the lights out with the bat or the ball, we’d have to stand up and take notice.” He said it would have been ideal to have all the players together and play as a group and a squad (ahead of the World Cup).
“It is concerning … but unfortunately we can’t. However, we’ve got at least half of our (first-choice) squad going to the West Indies and Bangladesh, so a core group will be there, and they will be able to play together.”
IPL 2021: Foreign players participation in IPL becoming big headache for BCCI
IPL 2021 Phase 2 – Status of the foreign players:
– England & Wales Cricket Board (ECB) has completely disallowed participation of their players in IPL on account of their series against Bangladesh.
– Cricket West Indies is yet to respond to BCCI’s request to advance Caribbean Premier League by 7-10 days
– Cricket Australia is yet to make any formal announcement on releasing or disallowing their players for IPL 2021 Phase 2. Meanwhile almost all IPL players from Australia have already opted out of tours of West Indies and Bangladesh.
– New Zealand Cricket also hasn’t come out with any public statement on the issue. New Zealand is due to tour Pakistan during the IPL Window
– Bangladesh Cricket Board has also declared that both Shakib Al Hasan and Mustafizur Rahman will not be released for IPL 2021
–  Cricket Sri Lanka is the only one which is ready to dance on BCCI’s tune – but unfortunately none of the Lankan player has a IPL Contract
IPL 2021 Phase 2: When finally the dates & schedule will be announced for IPL remaining matches?
IPL 2021 DATES & Schedule: The top brass of BCCI has already announced the window for the remaining 31 matches. According to BCCI Vice President Rajeev Shukla, ‘IPL 2021 will be completed between September 18th to October 15th’. The final date will only be announce once BCCI sorts the foreign player participation issue. The most important of all is the stand of Cricket West Indies (CWI). In case BCCI fails to get the support of CWI and get them to advance CPL 2021 by few days, the 9 top Caribbean cricketers will stay absent from first 10 days of Phase 2 and the same would not go down well with the IPL franchises.