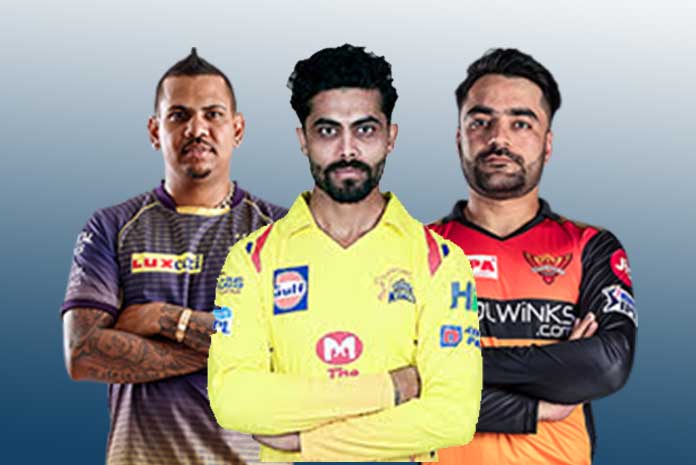 The 13th edition of Indian Premier League (IPL 2020) is all set to kick-off from September 19 in the United Arab Emirates. The matches will be played across three venues- Dubai, Abu Dhabi and Sharjah.

The Middle East is renowned for having slow and low tracks, which means that it will assist spinners, who can use the conditions in their favour to dominate IPL 2020.

Ahead of the highly anticipated tournament, we take a look at the top 10 costliest spinners in IPL 2020:

Windies’ mystery spinner Narine is an asset to KKR because he can open both bowling and batting. He got the ability to pick a bulk of his wickets while bowling the death overs as well as stem the flow of runs in the middle overs.

Narine is equally useful with the bat as he can provide solid start to his side with his swasbuckling batting in the powerplay overs and he can even provide impetus at the back end of the innings.

When it comes to spin bowling, Rashid doesn’t need any introduction at all. The Afghan international has been one of the top spinners in the IPL ever since his maiden appearance in the tournament in 2017.

Till now, Rashid has bagged 55 wickets in 46 IPL matches and that too at an impressive economy rate of 6.55 and he will definitely be a spinner to watch out for in UAE.

Kedar Jadhav was criticized for his slow strike-rate in IPL 2019. But the Indian all-rounder still remains a key player in MS Dhoni’s squad as his off-spin will come handy on the slow tracks of UAE, where IPL 2020 is scheduled to take place.

Jadhav has the ability to control the flow of runs with his round arm action as batsmen find it difficult to hit big shots off his ball as the delivery lacks bounce and pace.

Other than being a capable spinner, Jadhav also brings depth to CSK’s batting line-up.

Ashwin is one of the most experienced campaigners in IPL, who was bought by Delhi Capitals from Kings XI Punjab during the IPL 2020 auction. He is arguably the best off-spinner in IPL history who has clinched 125 wickets in 139 IPL matches at an excellent economy rate of 6.89.

In IPL 2019, Ashwin claimed 15 wickets despite playing most of his matches on the unhelpful Mohali track. Hence, it won’t be wrong to say that Ashwin can wreak havoc in UAE.

The spinning all-rounder of CSK will be an indispensable cog for the franchise on those spinning surfaces in the UAE. Jadeja is at his best when the pitch grips a little and he is able to complete his quota of overs in no time.

Jadeja has also evolved immensely as a batsman in the last few years. He has shown his class in difficult situations and led the CSK charge with the bat in hand. On top of that Jadeja is a gun fielder which will end up saving several runs in the field.

Chawla may have not played for India in eight years, but he has kept going in the domestic arena and the IPL. He is the joint-third most wicket-taker in IPL with 150 wickets in his kitty.

Interestingly, every season, Chawla has picked 10 or more wickets and overall he has scalped 150 wickets at an average of 27.14 with an economy rate of 7.82 and strike rate of 20.82.

Chawla was a vital cog for Kolkata Knight Riders (KKR) over the years, won two titles with the franchise, and was a part of many special moments including hitting the winning runs in the 2014 final.

However, after six years at KKR, Chawla will find a new home in CSK and the spinner will aim to achieve many more milestones with his new team.

The leg-spinner is a personal favourite of skipper Virat Kohli who hands over the ball every time he looks for a break. Chahal enjoyed a good IPL 19, finishing with a total of 18 wickets and also reached the 100 wickets milestone in IPL.

He can do both – pick wickets and contain runs. Chahal has been a consistent performer and RCB will be hoping that the 30-year-old delivers in UAE as well.

Chinaman bowler Kuldeep Yadav will be a trump card for the KKR side if he can get going. With an extremely well-disguised action, Kuldeep on his day is a nightmare for any batsman.

In 2019, Yadav got just four wickets from nine matches and was dropped from KKR after logging an average of 71.50 and an economy rate of 8.66 and will be hoping to bounce back stronger in IPL 2020 given the assist he’s going to get from the pitches in UAE.

Axar, who is a left-hand batsman and slow left-arm orthodox bowler, can weave magic on UAE’s sluggish pitches. His attacking aapproach is what makes him dangerous and a wicket-taking bowler.

Axar has picked 71 wickets in 82 IPL matches with an impressive economy rate of 7.46.

Interestingly, during IPL 2016, Axar took four wickets in five balls including a hat-trick to help Kings XI Punjab beat Gujarat Lions. That was the lone hat-trick in that edition.

Karn Sharma rose to prominence during the 2013 Indian Premier League when he represented the new franchise, Sunrisers Hyderabad. He formed a potent spin bowling partnership with Amit Mishra and took 11 wickets in 13 games at an economy of 6.6.

The following season, he picked up 15 wickets for Hyderabad in 14 games with a best of 4/38 against the Kolkata Knight Riders. He also appeared handy with the bat having a strike rate of 144, while batting down the order.

After having an unimpressive IPL in 2015 and 2016, Karn traded sides for the Mumbai Indians and roared back to pick 13 wickets from 9 matches in 2017 with a career best of 4/16 against familiar foes Kolkata Knight Riders.

Here’s the top spinners of all the  eight teams in IPL 2020: