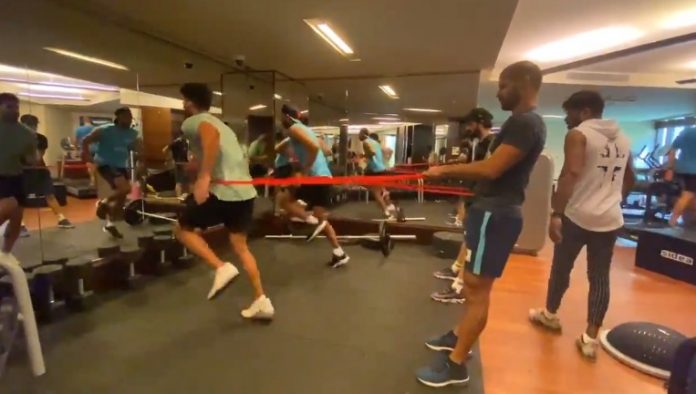 Delhi Capitals led by Shreyas Iyer are currently in Dubai preparing for the upcoming IPL 2020 tournament.The Delhi Capitals official shared a rare footage of DC boys at gym session.All IPL teams preparing hard for upcoming IPL 2020 tournament. Like other franchise DC boys also started their training and sweated it out in Nets.Taking to the microblogging site”DC captioned a hilarious post” Rare footage of you trying to run away from your family #Whatsapp groups

The last team to begin training was Chennai Super Kings (CSK).The 13th edition of the IPL is scheduled to start from September 19.

ll teams have got into the groove of the upcoming 13th season of Indian Premier League (IPL) with training sessions spread across the three host cities in the UAE – Abu Dhabi, Dubai and Sharjah – and have notched up their preparations of what would be a very different IPL season. In the same spirit, Delhi Capitals’ Prithvi Shaw tried to go the extra mile in the nets by rolling his arm over for some gentle leg-breaks. “Leaked footage discovered from an alternate universe” is how Delhi Capitals termed this unlikely development, but Shaw tasted some success as the batsman who launched his loopy delivery into the night sky was apparently caught somewhere in the deep.

Getting back to training ?
Learning from seniors ??
Capitalising on opportunities ??

Delhi are coached by former Australia captain Ricky Ponting and will be led by Shreyas Iyer. They have the likes of Ravichandran Ashwin, Ajinkya Rahane, Shimron Hetmyer, Kagiso Rabada and Ishant Sharma in their midst.

T20 World Cup – IND vs PAK: Virat Kohli sends warning to Babar Azam & Co, check what he has to say

India vs Pakistan LIVE: Pakistan’s training session called off ahead of...