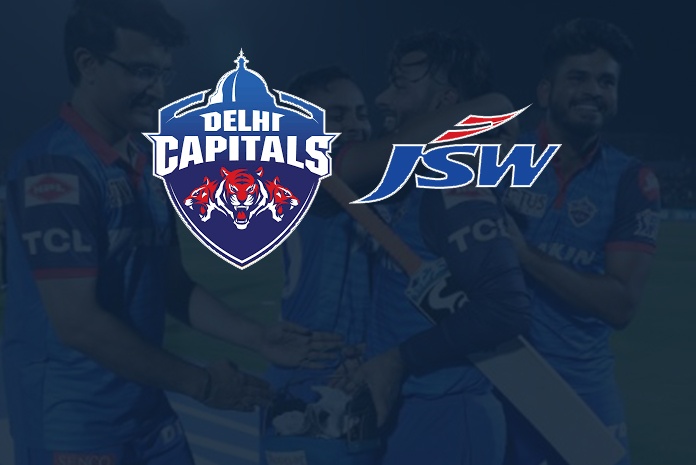 Indian Premier League franchise Delhi Capitals has decided to sign up with promoter company JSW Group as their front jersey partners. The Delhi based IPL team lost their long term principal sponsor DAIKIN as the 13th edition of the IPL was moved from regular window of Mar-May to Sep-Nov due to Covid-19.

The JSW group, which is the 50% owner of the Delhi franchise will now be the principal partner of Delhi Capitals. Promoter Parth Jindal, who oversees the JSW group’s paints and cement business and is also part of the steel operations has agreed to be the new principal sponsor for the franchise.

“JSW got a slight discount over what Daikin was paying because of no ticket sales, no meet and greet. But we’ll be showcasing our steel, cement and paints brands during IPL and we will be advertising also on Star and Hotstar,” Jindal declared to Live Mint.

According to the information available with InsideSport, Daikin was paying 16 to 17Cr per annum as a principal sponsor of the Delhi team. Once Daikin decided to pull out of the IPL, the Delhi based franchise did not get any offer which could match their expectations. That is the reason promoter group company decided to rescue the Delhi franchise.
Jindal, chairman of the Delhi Capitals IPL team, has admitted that almost all teams are seeing drop in value of sponsorship for the franchisees due to prevailing circumstances. Jindal admitted that lot of sponsorship deliverables earlier committed to franchises are now getting redundant which is the prime reason of drop in the values. Deliverables like ‘meet and greet’ with the players, Match tickets are now not available to the sponsors and according to him that is the reason most of the IPL franchise is renegotiating deals at this stage.
“Circumstances are such that some drop in sponsorship values for the teams are imminent, we have to live with it”, said Jindal.
IPL 2020: Franchises seeing drop of 25-30% in the values of sponsorships
Though no one wants to admit openly but most of the IPL franchises are witnessing drop of 25-30% in sponsorship values according to the market sources. Like Delhi Capitals, Rajasthan Royals lost their front jersey sponsor and back jersey partner. Rajasthan Royals has already got sanitary pad company Niine as one of the replacement at a discounted price for other they are still in the market.
Same is the case with Kings11 Punjab who lost some of the committed sponsorship commitments. Satish Menon, chief executive, Kings XI Punjab IPL team said that they do have some clients coming back and asking for a discount.

“No one is asking for massive discounts and such negotiations will continue as it is part of the game this year. We will try and avoid giving discounts but instead give value. The only positive side of the pandemic is that it has pushed us to adopt technology and we will be able to leverage it to interact with our fans and spectators,” he added.

Franchises will primarily lose out on 3 accounts from the IPL 2020.

Hit 1 – Franchises will lose on Gate Revenues from the IPL 2020 as no fans are likely to be allowed for the entire IPL 2020. Each franchise collects in a range of 22-28 Cr from the Gate Revenues, but in the 13th edition of IPL, this revenue source will be completely wiped out for the franchises.

Hit 3 – As Dream11 has been signed as IPL 2020 title sponsor @ 51% discount of VIVO’s values, this will directly impact the franchises coffers. 60% of the total central sponsorship pool gets distributed among the 8 franchises.

According to the InsideSport’s estimate, each franchise from the 3 components will lose in a range of 70-75 Cr.

Not only this, franchises will have to take hit from another account, that is the escalation in the costs. The IPL 2020 is moving to UAE, which means extra expense on the franchises head. In comparison to IPL in India, franchises will end up spending more on logistics (travel – accommodation), creating bio-bubble for the team, arranging practice facilities for the team in UAE and on the other requirements.