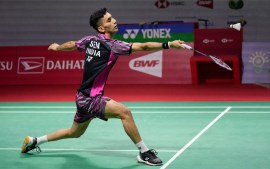 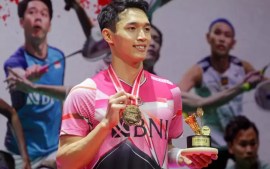 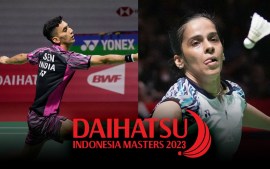 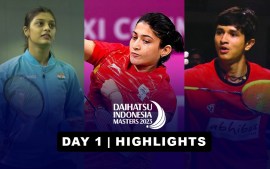 Indonesia Masters Badminton Highlights: Saina Nehwal advanced to the second round of of Indonesia Masters. She defeated Chinese Taipei’s Pai Yu Po 21-15, 17-21, 21-15. Ninth seed Lakshya Sen too has made a great start. The World No.10 sailed past World No.7 Kodai Naraoka in straight games 21-12, 21-11. Kidambi Srikanth meanwhile has bowed out from the first round. The unseeded Indian went down in straight games 10-21, 22-24 against Indonesia’s Shesar Rhustavito. HS Prannoy has lost the first game against Kanta Tsuneyama. Follow Indonesia Masters 2023 LIVE updates on InsideSport.IN

Lakshya Sen, who had a subdued start to the new season with early exits from Malaysia and India in the last two weeks, dished out a superlative performance to outwit Japan’s new sensation, Kodai Naraoka, 21-12 21-11 in his opening match. Seventh seed Sen will face Malaysia’s Ng Tze Yong next.

Meanwhile, former world No. 1 Kidambi Srikanth lost 10-21, 22-24 to Indonesia’s Shesar Hiren Rhustavito. The experienced Indian shuttler is not in the form recently and has made first round exits from all three tournaments he has played so far this year — the Malaysia Open, India Open and now the Indonesia Masters.

Against a lower ranked Rhustavito, he lost the first set 10-21. In the second game, he fought his way back and was leading for majority of the time. He had a 15-12 lead but couldn’t close out the set as he allowed his opponent to make a comeback. Rhustavito, took a 18-16 lead and a neck-to-neck battle ensured between both the players. Leading 22-21, two net errors at cucial moment helped Rhustavito seal the tie in the end.

Saina Nehwal made an impressive start at the Indonesia Masters Super 500 tournament, advancing to the second round. Saina, who had reached the second round at India Open, eked out a 21-15 17-21 21-15 win over Chinese Taipei’s Pai Yu Po to make it to the prequarterfinals.  Saina will face the winner of the all-Chinese clash between Zhang Yi Man and Yue Han in the next round.

India’s No.1 ranked Men’s Singles player HS Prannoy began the year by reaching the quarterfinals at the Malaysia Open. He however suffered first round defeat at the India Open next week. The World No.8 went down in straight sets against compatriot Lakshya Sen. The eighth seed will begin his Indonesia Masters campaign by facing Japan’s Kenta Tsuneyama in the first round.

Kanta Tsuneyama started the year with a semifinal appearance at the Malysia Open. He then withdrew from the Indian Open and will be featuring in the Indonesia Masters. The World No.17 will face a tough challenge against in-form Prannoy.

Priyanshu Rajawat advanced to the main draw after playing in the qualifiers. Rajawat, who is ranked 54th in the world will face Indonesia’s Chico Dwi Wardoyo in the first round.

Meanwhile, Rohan Kapoor and Sikki Reddy made it to the main draw after playing the qualifiers. They will face another fellow qualifiers in Jafar Hidayatullah and Aisyah Pranata.