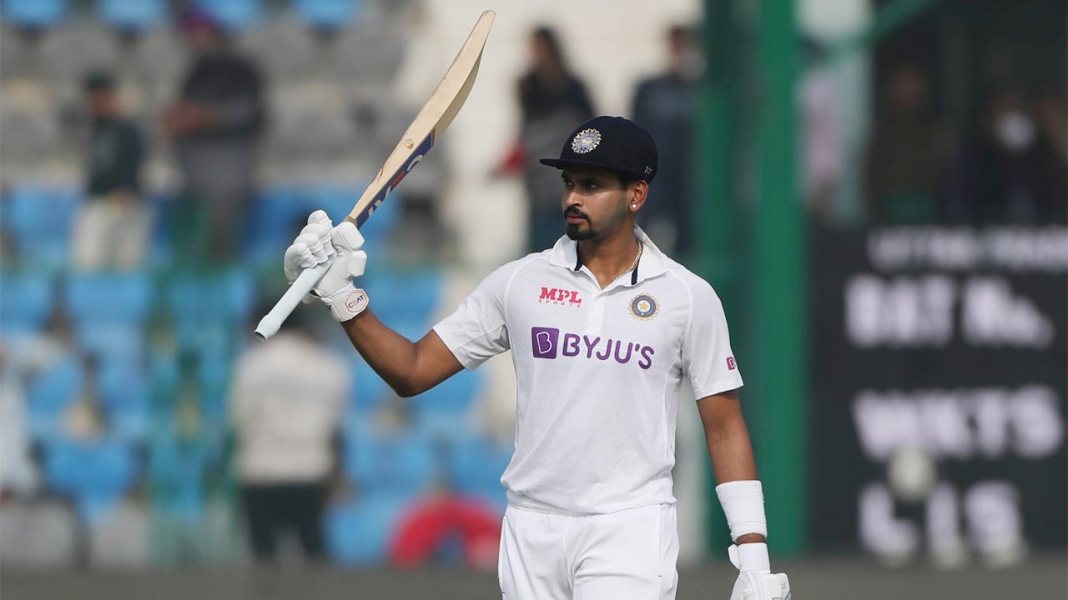 IND vs NZ LIVE: Selection headache for the second Test- Shreyas Iyer’s dream Test debut which featured a Test century and fifty has put lead to a selection headache for the second and final Test in Mumbai starting December 3. Skipper Virat Kohli is all set to return to the setup after rest and his replacement means one among stand-in captain Ajinkya Rahane, deputy Cheteshwar Pujara, Mayank Agarwal or Shubman will have to sit out. Follow India vs New Zealand LIVE updates on InsideSport

Iyer grabbed the opportunity with both hands and followed his first-innings 105 with an equally crucial 65 on Sunday to put India in the box seat.

Kohli is set to return to the squad for the Mumbai Test and batting coach Vikram Rathour said they were not in a hurry to finalise the playing XI yet.

“The captain coming back in, that will happen in the next game,” Rathour said after the penultimate day’s play at Kanpur’s Green Park Stadium.

“We’ll get to that point when we reach Mumbai. At this point, we want to focus on this game. There’s still a way to go and there’s a game to be won.”

Rathour was effusive in his praise for Iyer though.

“It’s always exciting to see a debutant come in and score a hundred. It’s very special, but I think he played even better in the second innings.”

“He is a very confident young guy who uses his feet well and plays spin bowling really well.”

IND vs NZ LIVE: Determined Shreyas Iyer says, ‘Rahul Dravid Sir told me to bat as many balls as possible’

Calls have grown to drop either Rahane or Cheteshwar Pujara, both of whom have been short of runs, to accommodate Iyer.

“I understand both are going through lean phases,” Rathour said of India’s senior batsmen.

“But they’ve played very important knocks for us in the past. We’re pretty sure they’d come back and play more such knocks for the team.”

Ajinkya Rahane
Stand-in-captain for the opening Test, Ajinkya Rahane is on top of the list when it comes to being first choice replacements. The 34-year-old is under fire from all verticals owing to his poor show for the last couple of years. He has struck only one century and a couple of fifties in the last 16 Tests. Over the years, his average has witnessed a staggering decline from 51.37 to 39.60.
Ajinkya Rahane in last two years:
2020– 272 runs from 4 Tests @38.86
2021– 407 runs from 12 Tests @20.35
vs NZ in 1st Test– 35 and 4 runs respectively
Former New Zealand skipper Daniel Vettori says India cricketer Ajinkya Rahane should be dropped for the second Test in Mumbai from December 3 so that he gets time to overcome his lean patch, which has continued for too long.
“He (Rahane) looks like he wants to be aggressive; he doesn’t feel tentative while he is batting. But still he is getting out, and ostensibly that starts to weigh on a batsman’s mind. I think, being dropped and have the ability to come back can then reset a lot of things for someone, particularly as a batsman,” Vettori opined on EspnCricnfo’s Match Day on Sunday.
“As you go into a Test match with pressure on your shoulders, then it can weigh on your mind. So, in a lot of ways if they (selectors) leave him out of the next Test, I don’t think it is a death knell for his career. I think it is just a one Test match dropping because it just resets everything, gives him a chance to go back and do a little bit of work,” said Vettori.
Cheteshwar Pujara
Ajinkya Rahane’s first Test deputy Cheteshwar Pujara is also under fire for his dismal performance. He managed scores of 26 and 22 in the Kanpur Test. India’s batting mainstay is yet to score a century since January 2019. If Rahane has been a failure, Pujara has failed to justify his place in the India Test side. However, he slammed 8 fifties in 12 games to keep himself ahead of Rahane in terms of stats attack.
Cheteshwar Pujara in the last two years:
2020- 163 runs in 4 Tests @20.38
2021- 626 runs in 12 Tests @31.30
Mayank Agarwal
With big names Ajinkya Rahane and Cheteshwar Pujara, Mayank Agarwal is logically the ideal fit for Virat Kohli’s replacement. He managed scores of just 13 and 17 runs in the first Test at Kanpur. He was nicked twice outside the off stump. However, he was only playing his second Test of 2021 after his failure in Australia in January. He sat for 10 straight matches during these matches.
2020- 133 runs in 4 Tests @16.63
2021- 64 runs in 2 Tests @21.33
Career- 1069 runs in 15 Tests @44.54
@Home- 614 runs in 8 Inns @87.71, 3 centuries
Away from home- 455 runs in 17 Inns @26.76, 4 fifties
Shubman Gill
Shubman Gill, who returned to India setup, after recovering from a shin injury in England scored a fifty in Kanpur Test. With Rohit Sharma rested and KL Rahul’s injury, Gill scored a fifty to keep himself in consideration for the second Test. However, his numbers are also not good enough when it comes to the overall year’s performance. He was ruled out of India-England Test after WTC Final failure. He also faced issues against incoming balls from Kyle Jamieson who bowled him twice.
2021- 387 runs in 8 Tests @27.64, 4 fifties
NOTE: Dropping anyone among Shubman Gill or Mayank Agarwal would mean that Wriddhiman Saha could be promoted up the order. The latter has opened for SRH in IPL career on numerous occasions. In another case, Team India skipper Virat Kohli also opens for RCB in IPL.

For more sports news and India vs New Zealand LIVE updates, follow us at insidesport.in