Malaysia complete the second-half turnaround by scoring twice in the third quarter to get the better of Chile and earn their first 3 points!

With this win, Malaysia climbed to third in their pool and can advance further in the tournament if they do well in the cross-overs. Chile, on the other hand, is at the bottom of the table with zero points and no win in two matches. In the first quarter, the Malaysian Firhan Ashari tried to attack, but missed the goal by inches as the ball went flying into the stands.

Malaysia almost scored minutes later after the ball went breezed past goalkeeper Adrian Henriquez but Vicente Goni made a timely intervention to ward off the threat. 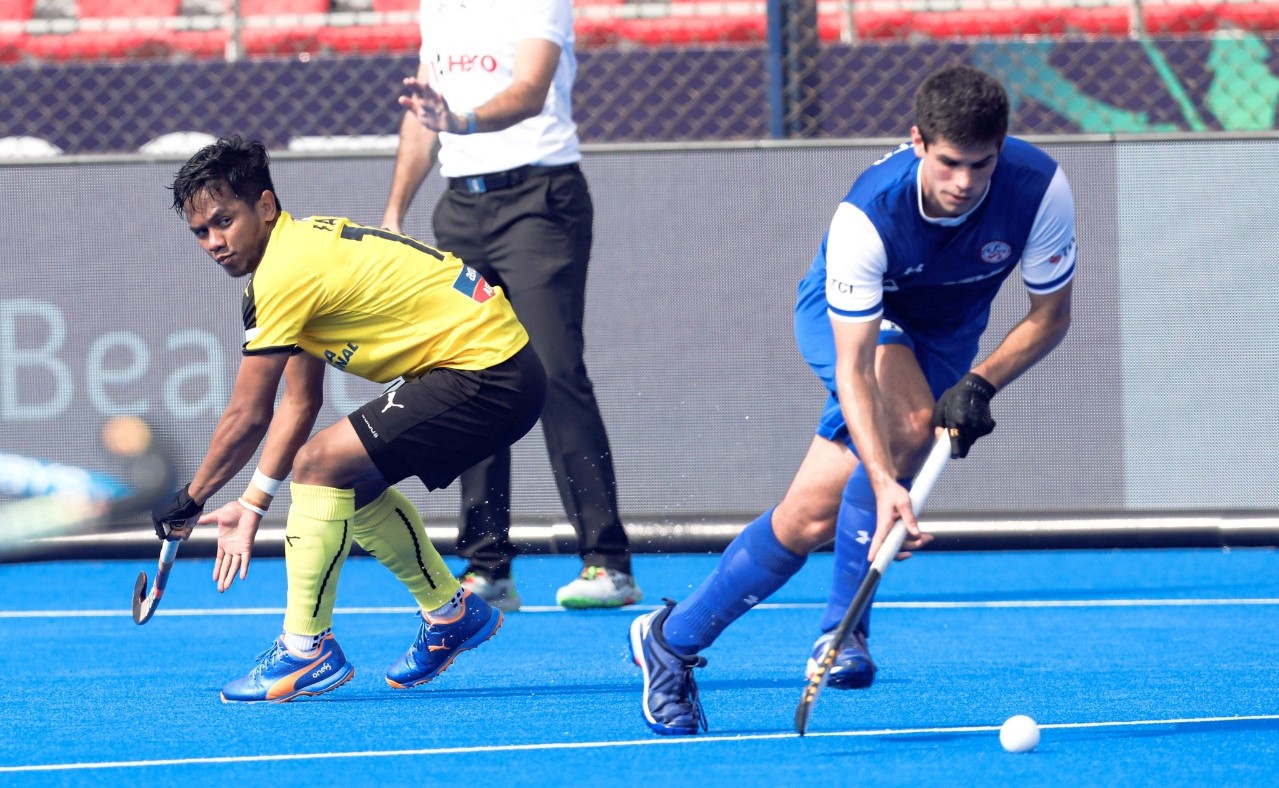 Chile earned a penalty corner in the eighth minute. However, Franco Becerra’s flick was defended well by Malaysia, with the first quarter ending goalless. Malaysia tried to attack at the start of the second quarter and got a penalty stroke. However, the ball hit a Chilean defender on the knee and he had to leave the field.

In the 19th minute, Chile earned a penalty corner and Amoroso Juan stepped up to find the back of the net. Debutants Chile held a 1-0 lead over Malaysia, a team which had previously finished fourth in the marquee event, their best in the tournament’s history.

Malaysia earned a penalty stroke in the 25th minute and Rahim Razie whizzed the ball past the keeper Adrian to restore parity to the scoreline.

However, in the 28th minute, smiles were back in the Chilean camp as Martin Rodriguez unleashed a screamer towards the left-hand side far corner of goalkeeper Hafizuddin Othman. Chile’s lead was restored, with the scoreline reading 2-1 in their favour at the end of the second quarter and half-time.

The third quarter saw Malaysia earning plenty of penalty corners. In the 40th minute of the match, Hamsani Ashran received the ariel ball and played a scoop to net the goalm bringing his team level at 2-2.

In the 41st minute, a Norsyafiq Sumantri strike helped Malaysia take the lead for the very first time in the match. The scoreline read 3-2 at the end of the third quarter. Both teams got a yellow card each and were one player short in the final quarter.

The final quarter saw Chile creating a chance, with skipper Raimundo Valenzuela getting an opportunity to even the score but the shot fell wide of the goal. Malaysia were handed another yellow card, which saw a player going off the field for five minutes.

In the 54th minute, Amoroso Juan was given a green card, which was changed to a yellow. Chile had to play with 10 men for five minutes. In the final minute, Chile got a penalty stroke, which they failed to convert. The match ended 3-2 in Malaysia’s favour. Sumantri received the ‘Player of the Match’ award for his match-winning goal for Malaysia.