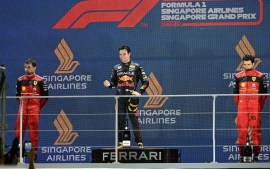 The Swiss team ran a camouflage design during the three days of the pre-season testing in Barcelona. Bottas, Zhou, and the reserve driver, Robert Kubica shared the driving duties.

Reliability issues confined the car to the garage for a long period of time. Alfa Romeo just managed 175 laps in three days in Barcelona. This performance saw them ninth out of 10 teams in the mileage charts.

However, on Sunday they became the tenth and the final team to launch their car for the 2022 season. They showcased a livery which was “A subtle nod to the past, recalling historical designs of years past. The heritage of Alfa Romeo and Sauber Motorsport” in what will be the Hinwil team’s 30th year in F1.

The Team Principal, Fred Vasseur added, “The start of the season is always an exciting time. It is one in which we see the fruit of the work of hundreds of people over a long period of time.”

“The C42 is a car we look forward to seeing racing, not just because it is the first we built in this new regulations cycle, one in which racing should be closer and more thrilling, but because we have the utmost confidence in this car helping the team make a big step forward towards the front of the grid.”

Valtteri Bottas said, “What is exciting is that we have no idea how that first race is going to pan out. Testing helped us confirm our expectations of where we stand, the progress we have made with the car. But now we are getting closer to the moment that really matters.”

“Since I joined, I have seen so much motivation within this team. Everyone is pushing a lot, trying to work harder than the others to be competitive. And that, in turn, gives me that extra boost when I am in the cockpit.”

Guanyu Zhou, their rookie driver said, “I am fully pumped up for the season, and seeing the C42 in the livery in which I will race it definitely makes it real. We are at the beginning of a new era, with new cars and new regulations. This creates an opportunity for all teams to make progress since we are all starting from scratch.”

“Everyone at Alfa Romeo F1 Team Orlen has been incredibly helpful since I joined and seeing all the hard work. The commitment and motivation from everyone, in Hinwil and at the track, fills me with pride and excitement. I can’t wait to be on the grid with this car and work with my team to bring home the results we are targeting together.”