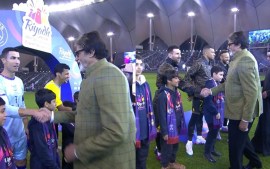 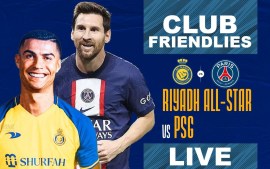 PSG vs Riyadh All Star LIVE Streaming: BATTLE of GOATs, Ronaldo vs… 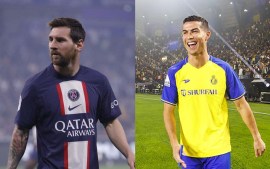 All eyes are on the FIFA World Cup 2018 derby – Portugal versus Spain big match today (Friday). Going into the game,…

All eyes are on the FIFA World Cup 2018 derby – Portugal versus Spain big match today (Friday). Going into the game, the Portuguese star Ronaldo strikes it big – a deal with sleep measurement and improvement brand SleepScore.

Football fraternity across the world is waiting for the Mother of All Rivalries this FIFA World Cup 2018 as Spain take on Portugal. Before donning the colours of his ‘janmabhoomi, (motherland) against the team from his ‘karmabhoomi’ (the land of his professional action), Ronaldo made headlines for his yet another brand endorsement deal.

Arch rivals Portugal and Spain will open their FIFA World Cup 2018 campaign at the Fisht Stadium in Sochi, with the third match scheduled for the day (11.30 pm IST).

The Portugal–Spain football rivalry – also known as The Iberian War or The Iberian Derby – is one of the oldest international football rivalries. Its origin dates back to 18 December,  1921, when Portugal have lost to Spain 1-3 at Madrid in the first ever international friendly game between the two nations. Portugal had to wait for five years for playing out their first draw (2–2) against Spain 1928, while their first win came further 21 years later when they had drubbed the Spanish national team 4-1.

Both belong to the strongest football nations of the world, and have met a total of 35 times, including 28 friendlies. The past record is heavily loaded in Spain’s favour with 18 wins to Portugal’s six. Twelve games have been drawn till date.

In the first even FIFA World Cup meetings between the two sides, then hosts Spain had drubbed Portugal 9-0 at Madrid in 1934. Portugal had restored some pride in their second game at week later on 18 March, 1934, by reducing the margin of defeat to 1-2.

The SleepScore brand ambassador Ronaldo will now have to bear the responsibility to help Portugal overcome sleepless nights each FIFA World Cup encounter against Spain has given them.

The 33-year-old Ronaldo will be the brand ambassador for SleepScore.The move comes after SleepScore, which specialises in sleep measurement and improvement, launched a new mobile app which Ronaldo, 33, will now help to promote.

Ronaldo, a five-time Ballon d’Or winner, also has endorsement deals with the likes of Nike, Tag Heuer and Herbalife.

“As an athlete, the importance of sleep can’t be overstated,” said Ronaldo, who recently won a third straight Uefa Champions League title with Real Madrid. “It affects every aspect of your being, and your performance on the field and off. I’m looking forward to using the SleepScore app daily as a way to improve my health and performance on and off the field.”

“Sleep is crucial for everyone’s well-being, but even more so for competitive athletes like Cristiano,” added SleepScore Labs chief executive Colin Lawlor. “We can’t think of anyone more qualified to represent the SleepScore brand and highlight the importance of sleep for better overall health.”

Portugal, who are the reigning European champions, will also play Iran and Morocco in the group stages in Russia.