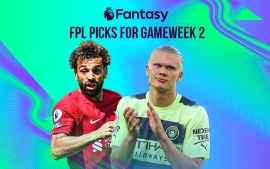 Fantasy Premier League 2022-23: FPL gameweek 1 team selection – A record-breaking 9.1 million managers played the game last season and you can join them in 2022/23. Fantasy Premier League (FPL) is undoubtedly the most popular and offers users the chance to battle it out with their friends and rivals across the globe as the first matchday of FPL gets underway on 6th August. Follow all FPL news and updates on Insidesport.IN

Harry Kane (£11.5m) is among the top challengers to Mohamed Salah (£13.0m) for the captaincy in Gameweek 1 of Fantasy Premier League.

Salah has scored in all five of his Gameweek 1 appearances for the Reds, averaging 13.6 points per match. His ownership of 60 per cent means the Egyptian will almost certainly be the most-selected armband choice for Liverpool’s trip to Fulham.

Harry Kane, Mohamed Salah and Erling Haaland in contention for the Captain’s armband

Elsewhere, Gabriel Jesus (£8.0m) and Erling Haaland (£11.5m) will also be heavily backed due to their high ownership. Arsenal’s Jesus is the most-popular player in Fantasy, picked by a massive 73 per cent of managers. He visits Crystal Palace on the back of seven goals during the summer.

Haaland and Manchester City team-mate Joao Cancelo (£7.0m) are both selected by over 45 per cent for their visit to West Ham United. Cancelo produced 108 points in away matches last season, second only to the 124 points of Salah.

Chelsea’s Reece James (£6.0m) was also a huge success on his travels in the previous campaign. The wing-back, who averaged 8.4 points per away start in 2021/22, faces Everton on Saturday.

Finally, Leicester City’s Jamie Vardy (£9.5m) and Newcastle United forward Callum Wilson (£7.5m) could be huge differentials. Both are under five per cent owned and have favourable home matches against Brentford and Nottingham Forest respectively.

Vardy produced seven double-figure hauls in his 20 starts last term, while Wilson was involved in 50 per cent of Newcastle’s goals when selected in 2021/22.