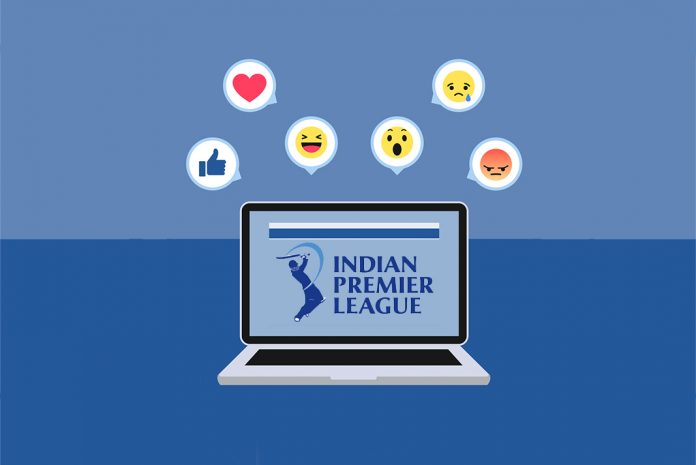 The social media site in a post has confirmed that 12 crore Indians were engaged in IPL conversation on Facebook. The number of IPL conversations on Facebook this season is reported to be at 35 crore – almost 27% of country’s total population. Team India captain Virat Kohli was the favourite subject to talk about, among the teams Mumbai Indians was the biggest talking point for the FB community.

Cake was the common theme for the IPL teams this season. Teams shared their celebrations with cake using FB live, which allowed fans to participate in this fun tradition with their favourite players.

The blog by Asha Thacker on media.fb.com is titled IPL 10 Brings Millions Together on Facebook. It reveals, FB live video of Mumbai Indians celebration at hotel after their mid-night title triumph has recorded almost 54 lakh views.

The blog, reproduced here, can be visited here.

The blog has shared in-depth details of FB engagements by the league, teams, players and media.

Throughout the 47-day tournament, the Indian Premier League posted video of team warm-ups before each match and closed the tournament on Facebook by sharing video of the championship trophy presentation. Additionally, the league shared images of key match moments as they happened and special off-the-field moments, such as Shah Rukh Khan and AbRam at the Kolkata Knight Riders‘ opening match.

The IPL Champion Mumbai Indians went live as the team returned to the hotel to celebrate their victory, foreshadowed by their popular music video highlighting the team’s dancing prowess.

If there was one theme on Facebook for teams this season, it was cake. Teams including the Mumbai Indians, Kolkata Knight Riders and Sunrisers Hyderabad shared their cake cutting celebrations using Facebook Live and videos during the season, allowing fans to participate in this fun tradition with their favourite players.

Throughout the IPL season, teams shared unique moments with fans, giving them unprecedented access to their favourite players and owners. The 2016 champions Sunrisers Hyderabad brought fans along to training sessions and team meetings. The team also went live for exercise session in the pool. The Delhi Daredevils shared pre- and post-match moments. This included a live on pitch interview with Man of the Match Corey Anderson.

Kings XI Punjab showcased its team’s playful side multiple times during the season; including kicking off a season-long prank war with this video featuring Marcus Stoinis and an unsuspecting Manan Vohra. Meanwhile, the Kolkata Knight Riders shared the preparation strategies for the IPL playoffs.

PLAYERS AND OWNERS
During the IPL season, players used Facebook to directly connect with their fans in personal, authentic ways. For example, Ajinkya Rahane showcased the dancing skills of his teammates MS Dhoni and Ben Stokes. In addition, Shikhar Dhawan surprised his fans with a Facebook Live Q&A and Virat Kolhi wished Sachin Tendulkar Happy Birthday with a “few” of his closest friends.

Yuvraj Singh shared a behind-the-scenes look at what goes into a commercial shoot and poked fun at his good friend and teammate Ashish Nehra.

News publishers from across the country joined the T20 carnival.

The IPL action didn’t end on the pitch, as commentators, legends, team owners and other public figures shared their favourite moments on Facebook.

· Commentator Matthew Hayden discusses the atmosphere of the IPL Finals