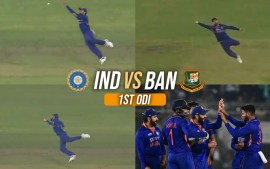 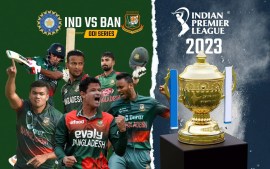 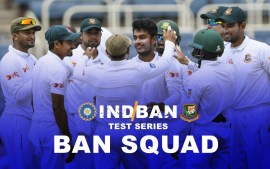 BAN vs AFG Highlights – Afghanistan win by 7 wickets, Najibullah SIXES vs Bangladesh: A stunning counter-attack from Najibullah Zadran saw Afghanistan seal a comfortable seven-wicket win over Bangladesh on Tuesday. Chasing 128 to win, Afghanistan were in a spot of bother before Zadran smashed six sixes in his partnership with Ibrahim Zadran. Afghanistan thus became the first team to book their place in the Super 4s of the Asia Cup 2022. Follow Asia Cup 2022 LIVE Updates & AFG beat BAN Highlights with InsideSport.IN.

India Playing XI vs HK: Rishabh Pant likely to COME BACK, who will…


Afghanistan were in a spot of bother needing 63 to win off the last six overs on a slow and sluggish pitch in Sharjah. Barring Hazratullah Zazai, none of the batters had got going as Bangladesh put the stranglehold on Afghanistan with spin. Ibrahim Zadran had played a laboured knock until then with Shakib and Co in complete control of the match.

Congratulations to Afghan Nation for another spectacular win over Bangladesh in Asia Cup 2022 keep supporting us and pray for the rest of tournament Long live Afghanistan 🇦🇫✌️ pic.twitter.com/tOw4AdY4JQ

However, the return of pace bowling and Najibullah Zadran’s introduction at the crease changed the course of the game. The big-hitting left-hander stitched an unbeaten 69-run partnership with Ibrahim Zadran who also found his groove in the final few overs.

While Ibrahim picked the gaps beautifully to get a couple of boundaries and rotate the strike, Najibullah targeted the shorter side of the ground and launched the Bangladesh attack into the stands. In his 17-ball stay in the crease, Najib hit six sixes, with Mustafizur Rahman, Mohammad Saifuddin and Taskin Ahmed all taken for runs. Ibrahim also remained unbeaten having managed a 41-ball 42 to see his team over the line.

Earlier, Bangladesh won the toss and opted to bat first a decision captain Shakib Al Hasan would come to regret later. Bangladesh were reduced to 28/4 in a fine spell of bowling by Mujeeb ur Rahman who got the first three wickets. Rashid Khan then chopped in, in the process becoming the second highest wicket-taker in T20Is.

While the rest struggled, it was Mossadek Hossain who restored some respect for Bangladesh with his unbeaten 48. Hossain’s innings took Bangladesh over the 100-run mark and to a respectable 127/7. The defeat means that Afghanistan have become the first team to make it to the Super 4s of the Asia Cup.