Wimbledon 2022 LIVE: Beaten finalist Ons Jabeur told herself “I love you” as she battled against Elena Rybakina at Wimbledon on Saturday,…

Wimbledon 2022 LIVE: Beaten finalist Ons Jabeur told herself “I love you” as she battled against Elena Rybakina at Wimbledon on Saturday, revealing she even had a picture of the winner’s trophy on her phone in the hope of inspiration. World number two Jabeur took early charge of the match on Centre Court, but 17th seed Rybakina powered back to win 3-6, 6-2, 6-2. The defeated Tunisian admitted she had not played her best tennis in the second and third sets as the big-hitting Kazakh found her range.Follow Wimbledon 2022 LIVE updates on InsideSport.IN

“It is frustrating to play someone that serves really big and doesn’t give you the chance sometimes to take that break,” she said. “I just kept telling myself, like, ‘this is not over, I trust you’. I even said, ‘I love you’ to myself during the match. It wasn’t meant to be.” Jabeur, the first Arab woman to reach a Grand Slam final, was attempting to become the first African woman to win a major. But the 27-year-old, who had previously never gone beyond the quarterfinals at a Slam, said she would learn from her experience at Wimbledon. 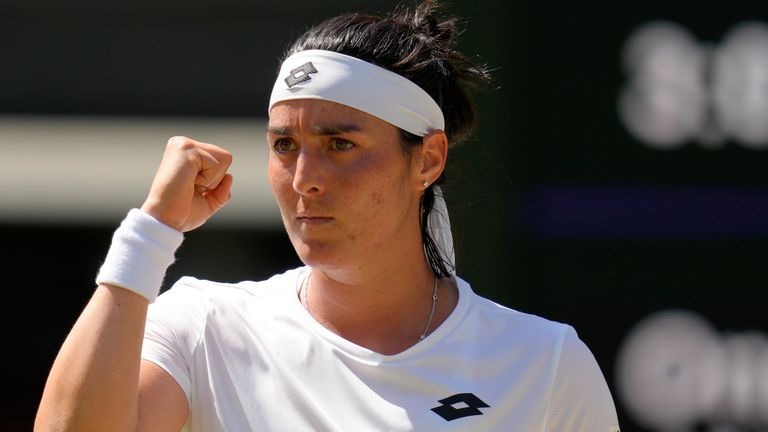 “I don’t disbelieve in myself, and I know that I’m going to come back and win a Grand Slam, for sure,” she told reporters. “This is tennis, and it’s part of it. I have to learn from it, definitely. But I’m very, very positive about it.” The player, labelled by Tunisians as the “Minister of Happiness”, said she had given everything during her run at the All England Club. “Of course, I will leave happy, with a smile, big smile always,” she said. “Tennis is just a sport for me. The most important thing is that I feel good about myself.”

A smiling Jabeur showed reporters she had a photo of the Venus Rosewater Dish — presented to the women’s champion — on her phone
“I need to take it off,” she joked. “Apparently I should have put the other one.” Jabeur, who wished her fellow Muslims a “happy Eid” in her post-match interview on court, said she hoped to inspire others to follow in her footsteps.

“It’s really amazing to see a lot of fans, not just from Tunisia but from the Arab world,” she said. “I just try to inspire as many generations as I can,” she added. “It’s very nice to play this final. I really cannot wait for more finals for me. I hope they’re not really disappointed, but I’ll try my best next time.