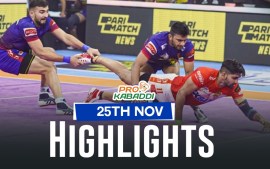 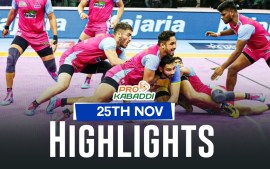 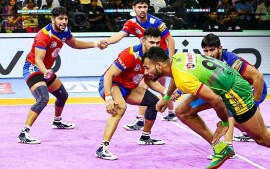 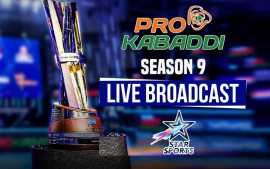 PKL 2022 Playoff RACE – Pro Kabaddi League Season-9: As the Pro Kabaddi League Season 9 enters into its eighth week, the race for the playoffs has intensified. Out of the 12 teams, 11 teams are still in contention to seal the Top 6 spots on the points table. Teams will be in intense battle in the upcoming weeks to secure the playoffs spot. Watch PKL 2022 LIVE Streaming with Disney+ Hotstar & Check PKL 2022 Points Table with InsideSport.IN

So far, the Pro Kabaddi League Season 9 has witnessed 42 days of action and still 32 matches are left in the league. None of the 12 teams have qualified for the playoffs till now. However Telugu Titans is the only team to lose its chance to fight for a spot to the qualfiers as they are all but out of contention. They are currently languishing at the bottom of the table with just 2 wins from 17 matches and have just 15 points on the board.

Every team will receive 5 points for a win and in case of a tie both the teams will receive 3 points each. Teams can also receive 1 point even after a loss of their margin of defeat is less than 8 points. Only if a team loses by a margin of more than 8 points they will not get a point after the match.

Currently, apart from table toppers Puneri Paltan and Bengaluru Bulls – who have five matches left,  all the other teams have six matches at hand, with Gujarat Giants alone having seven more matches at hand.

Ever since the league became a 12-team league, only two seasons were played with the current format in which all the teams will be facing all the other teams twice in the league. In the last two seasons, a team that finished at the sixth spot needed 64 and 66 points respectively to qualify. So let’s look at the qualification scenario for each teams.

Table Toppers Puneri Paltan have five matches remaining in the tournament and they are in a comfortable position as they are the only team so far to collect more than 60 points in the league. With 64 points already in their kitty, even a draw in one of their remaining five games can secure them a spot into the playoffs. The team led by Fazel Atrachali will however want to secure a top spot.

The champions of the inaugural edition of the league are at the second spot on the points table at the moment. The team is riding high mainly because of the performance of their star raider Arjun Deshwal, who is leading the raid points tally for the season. They have so far collected 59 points and from the remaining five games, even if they have to win two games to book a spot in the playoffs.

Bengaluru Bulls had a great season despite releasing their star raider Pawan Sehrawat during the auction this year. The 2016 champions currently have 58 points and need to secure two wins from their remaining five matches to ensure a place in the playoffs. The men in red can easily achieve it with the form that they are in currently.

UP Yoddhas are the only team who have secured a spot in the playoffs ever since their inception to the league in Season 5. The team is aiming to secure a fifth straight playoffs spot this year. They find themselves at the fourth spot on the points table with 50 points on the board. The Yoddhas atleast three wins from their remaining six matches to keep their hopes alive in the tournament.

Dabang Delhi had a great start to the season but they lost steam midway through the league and they are now clawing they way back into the season. The defending champions are struggling with their form and find themselves at the fifth spot on the points table with 50 points. They have five matches remaining in the tournament and in order to qualify for the playoffs and keep their title defence hopes alive, the team led by Naveen Kumar has to win three more matches from their remaining five games.

Bengal Warriors have similar numbers like UP Yoddhas as they have won eight matches, lost six and two of their matches ended up in a tie. They have 48 points from the season so far and need atleast another 16 points to stand a chance of qualifying for the playoffs. Like UP Yoddhas, they also have to win three matches from their remaining six and should draw one game to qualify

Tamil Thalaivas started the season on a poor note but they have made a stunning comeback in the second leg of the tournament and now find themselves at the sixth spot on the points table. The Thalaivas have not qualified for the playoffs even once in the league’s history and the team now have a realistic chance of securing their maiden qualifiers spot if they win atleast three matches and one of their remaining contest ends up in a tie.

Like the Thalaivas, three-time champions Patna Pirates too had a very poor start to the season in the first leg, but they have revived their campaign and are now putting in some terrific performances in both defence and offence and are fighting for a spot in the qualifiers. They have 47 points after 17 matches in the league so far and need atleast 17 more points to ensure they have a chance of qualifying. From the remaining 5 matches they need to win atleast three and secure a tie in the other.

The second edition champions U Mumba endured an inconsistent season so far as they have registered eight wins and eight losses from the 16 matches that they have played so far. They are at the eight spot on the points table with 45 points on the board. To secure atleast 64 points points on the board, they need to win four out of their remaining six games to come close to sealing the Top 6 spot on the table.

Haryana Steelers have been an inconsistent side in the season so far. The team led by the experienced Joginder Narwal, has only 41 points from 17 matches so far in the league. They need a minimum of 23 more points from their remaining five games to ensure they get a spot in the playoffs. To get those 23 points they have to win all their remaining matches. So the upcoming matches will be a knockout game for the Steelers.

Gujarat Giants are on the verge of elimination as they find themselves at the 11th spot on the points table. The Giants have 34 points from 16 matches that they have played so far. To stand a chance of qualifying for the playoffs they need to win all their remaining matches six matches.