Bhavina Devi went down to Ying Zhou of China in the final. Patel thus became the first to win a medal for India in table tennis at the Paralympics and is only the second female Paralympian to finish on the podium.

Nishad Kumar broke the Asian record with a jump of 2.06m to bag silver in the Men’s High Jump T47. In Men’s Discus Throw F52, Vinod Kumar settled for bronze with an Asian record throw of 19.91m. However, Vinod Kumar’s bronze medal is currently under review as the Paralympics classification committee has decided to review the process. The victory ceremony for the Day was postponed and will be held on Monday.

@20:30: A protest has been launched against Vinod Kumar’s F52 classification. However, India is confident that he will retain the bronze medal.

It turned out to be a SUPER SUNDAY for #IND 🔥

It’s a #Bronze for #IND as his best throw of 19.91m in the Men’s Discus Throw F52 final earns the nation their THIRD medal of the day. 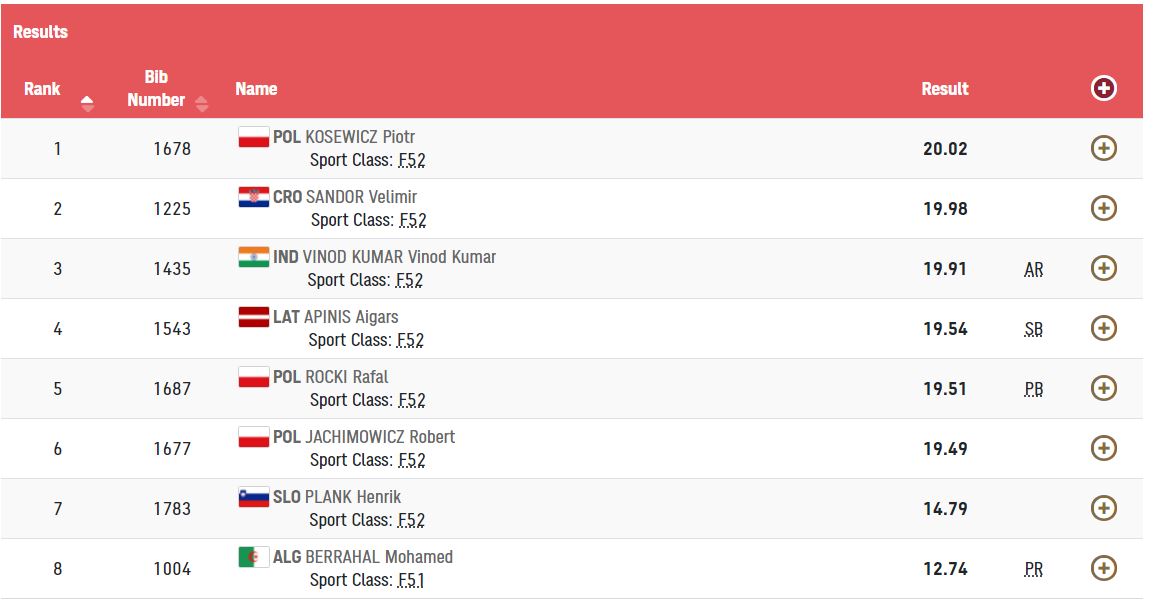 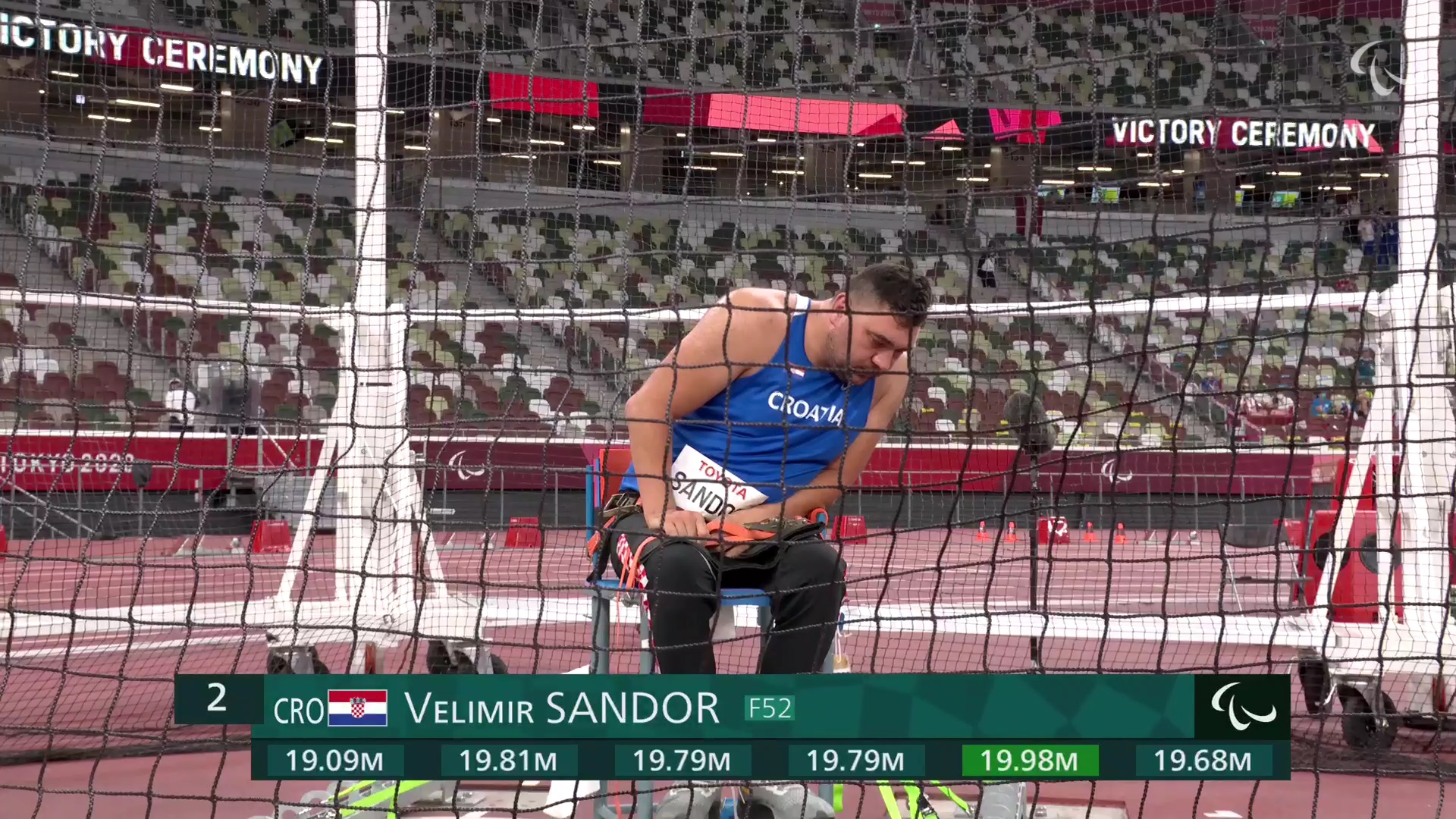 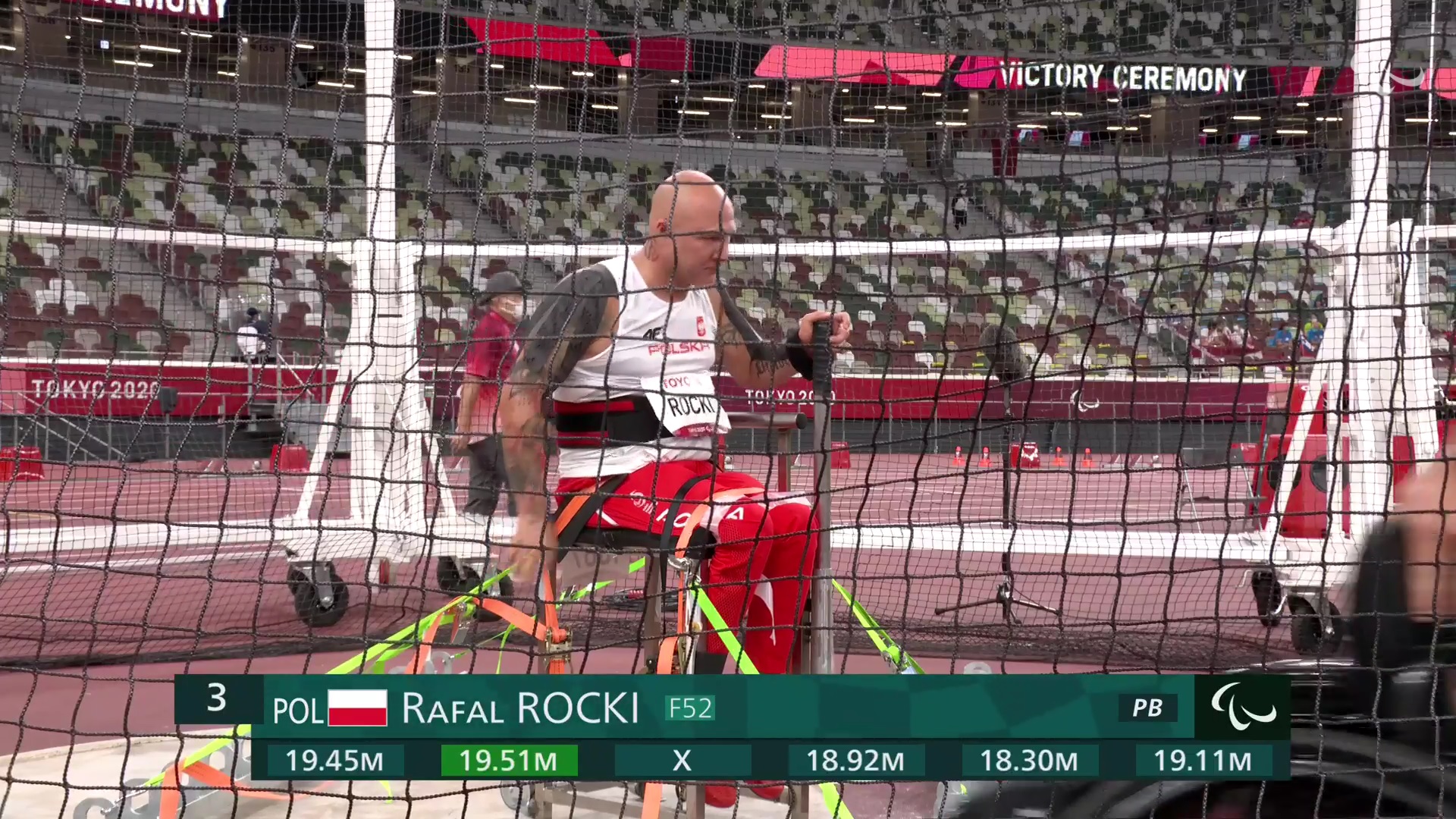 The leap that earned Nishad Kumar that glorious #Silver! 😍

India at Tokyo Paralympics Day 5: 🚨 Another medal in the bag for #IND 🚨

Stay tuned to find out which medal it is! 😍#Tokyo2020 #Paralympics @nishad_hj 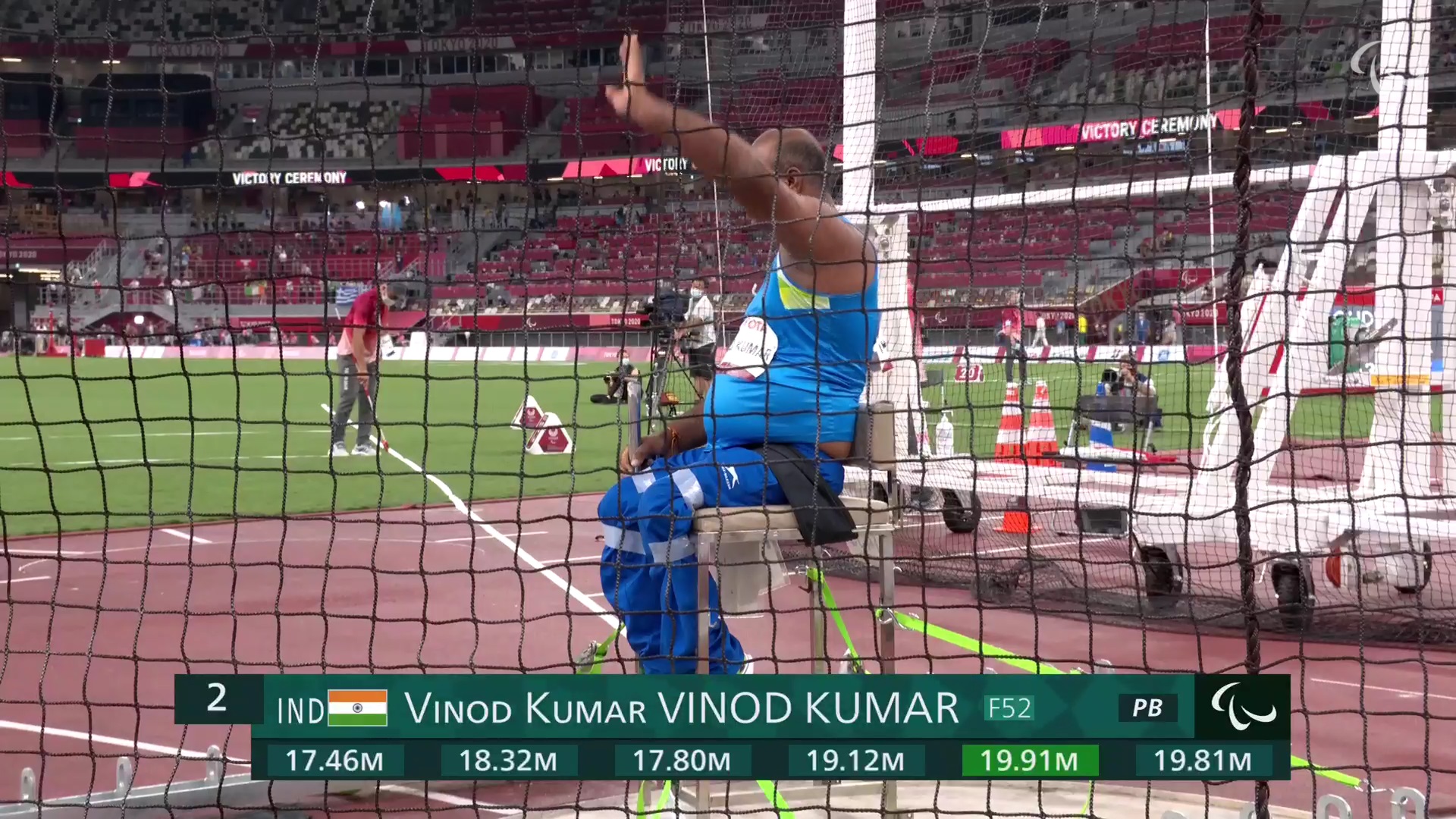 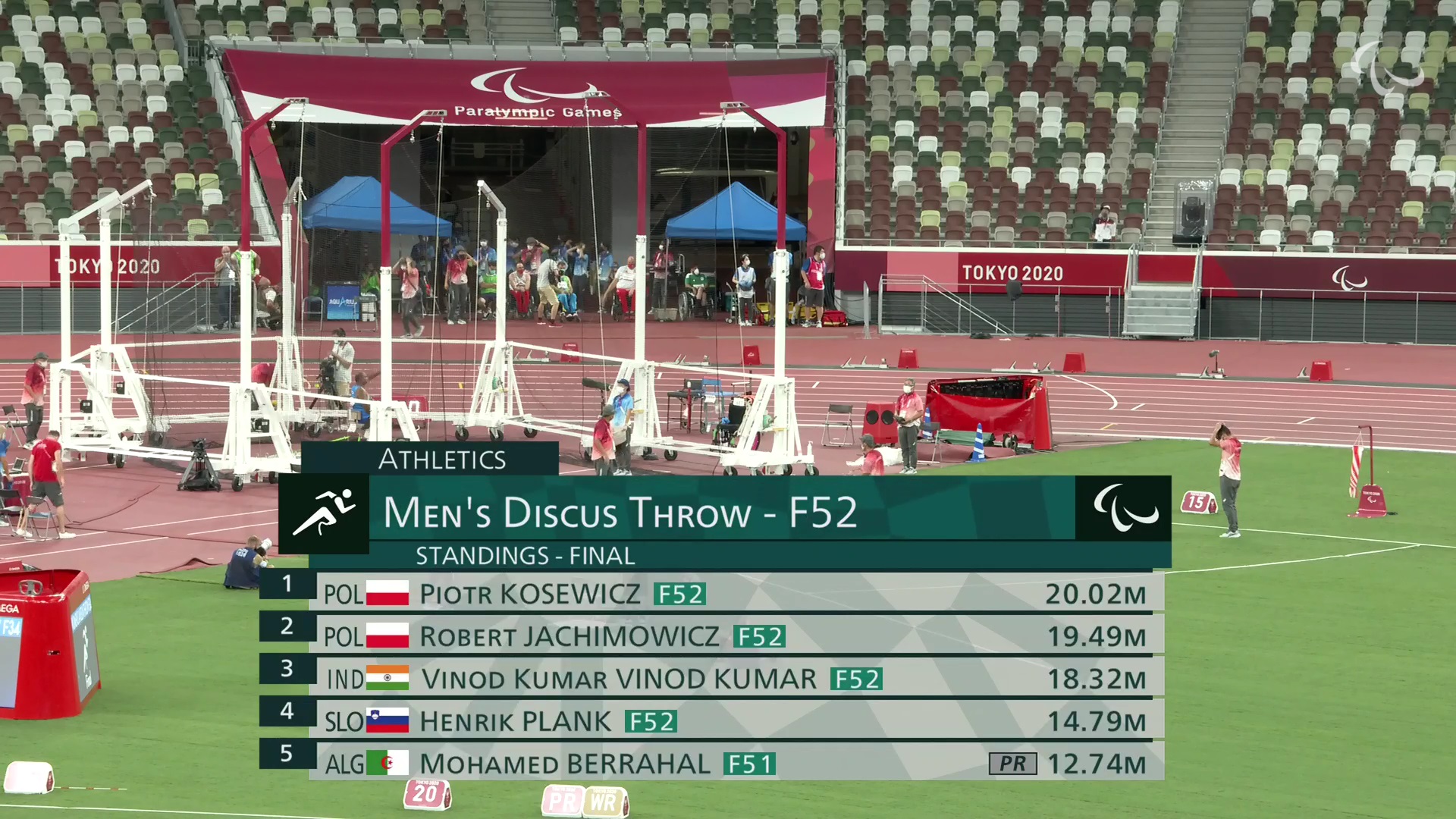 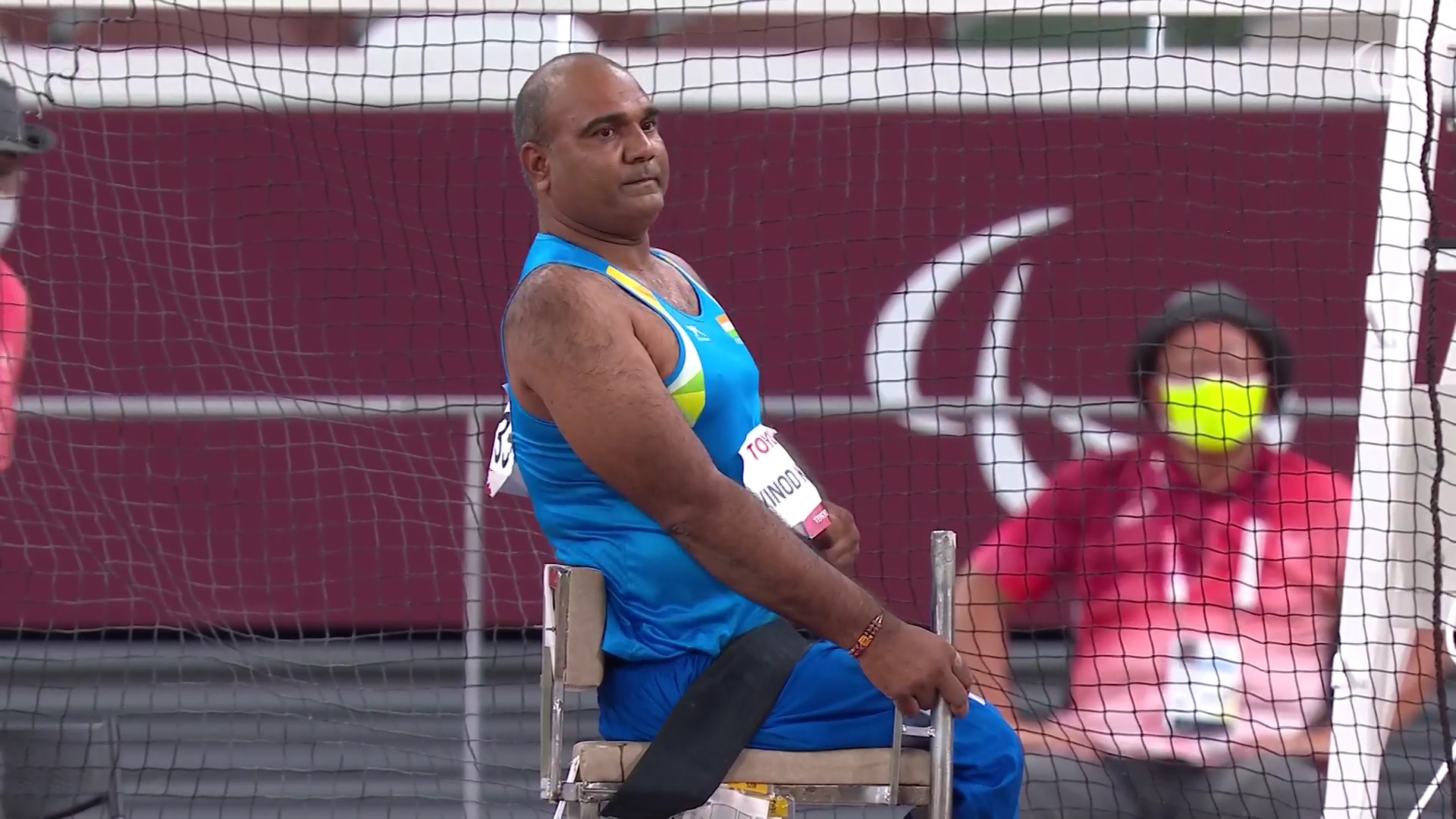 @16:40 PM: Vinod Kumar’s event will be live on YouTube and Paralympic.or website. You can also watch it on Doordarshan and EuroSport.

@15:20: India’s compound archery mixed team has bowed out from the quarterfinals. The team comprising Rakesh Kumar and Jyoti Balyan lost to Turkey’s Oznur Cure and Bulent Korkmaz in the quarterfinal. They lost the quarterfinal by a narrow 153-151 margin.

#IND‘s Jyoti Balyan and Rakesh Kumar are stopped in their tracks by #TUR‘s Oznur Cure and Bulent Korkmaz, who beat them 153-151 in the #ParaArchery Mixed Team quarterfinals!#Tokyo2020 #Paralympics

The remarkable Bhavina Patel has scripted history! She brings home a historic Silver medal. Congratulations to her for it. Her life journey is motivating and will also draw more youngsters towards sports. #Paralympics

Fantastic performance by @BhavinaPatel6 to bag a silver and open India’s account in the #Tokyo2020 @Paralympics. Wonderful show of skill and mental resilience. Extremely proud! #Praise4Para

It’s #Silver for #IND Bhavina Patel. India’s 1st medal. Hard luck for Patel in the finals as Zhou Ying from China wins the match by 3-0 at #ParaTableTennis #Paralympics

You made us proud Bhavina! 💜

Meanwhile, Jyoti Baliyan did well to shrug off her disappointing individual campaign and combine with Rakesh Kumar to advance to the mixed team compound archery event. The duo shot 147, six clear of their opponents from Thailand to clinch a berth in the last eight, putting them within two games of a podium finish.

They will play the quarterfinal at 2:40 PM (IST) today

ParaArcher Jyoti Baliyan crashed out of the Women’s compound Archery  1/8 Eliminations on Sunday. Baliyan went down fighting 137-141 to Ireland’s Kerrie-Louise Leonard. Baliyan did impress with her ability to hit the bullseye frequently, but Leonard’s greater efficiency meant that Baliyan’s hopes of making further dashed.

She will compete next with Rakesh Kumar in Mixed Team Compound 1/8 Elimination event at 9 am (IST) today.#Cheer4India #Praise4Para #Tokyo2020

Game 2: Ying Zhou is relentless, race to 6-1 in the second game. Bhavina launches comeback to clinch three back to back points to go 4-8. Zhou eventually claims 11-5 win.

Game 1: Bhavina starts on the back foot, trailing 5-7. She reduced the deficit to 7-8, but eventually conceded bragging rights to World No.1 Ying Zhou of China who clinched the game 11-7.

India’s para table tennis player Bhavina Patel is all set to GOLD at the ongoing Tokyo Paralympics event. On Saturday, she won the semi-final fixture against China Zhang Miao to cruise into the finals. She will face off Ying Zhou of China in the women’s singles final for the elusive medal on Sunday. Notably, Ying Zhou thrashed her in the opening match. Nonetheless, Patel is confident of giving her best shot and will be hoping to replicate her good form on Sunday.

Jyoti Baliyan had got off to a consistent start to the qualification round as she shot three sets of 56, followed by a couple of 55s. She eventually settled for 15th place, with 671 points out of a possible 720. India’s sole women archer at the Tokyo Paralympics, Baliyan will face off against Ireland’s Kerrie-Louise Leonard, who finished 18th in the ranking round.

#IND ‘s @Bhavina59068010 will take on World No. 1 #CHN player Ying Zhou in Class 4 #ParaTableTennis final match in some time

Are you all excited and ready for the action? Stay tuned and send in your #Cheer4India messages 👇🏼#Praise4Para#Paralympics pic.twitter.com/U8drKnKhrY

Vinod Kumar will be featuring in his maiden Paralympics and will be aiming to replicate the heroics of Joginder Singh Bedi, who won the bronze at the 1984 Olympics. Kumar won the bronze medal at the World Para Athletes Grand Prix in 2019 and clinched the gold medal at the nationals earlier this year as he prepares for the Tokyo Paralympics. The 41-year-old will now look to cash in on all his training when he takes the field on Sunday and convert all his pain and sacrifice into a potential podium finish.

Asian record-holder Nishad Kumar arrived at the Tokyo Paralympics with high expectations and is one of India’s biggest medal prospects. Kumar bagged a bronze medal at the World Championships in Dubai in 2019. He then cruised to glory in the T47 event at the Fazza International Grand Prix in early 2021.

He won the gold medal after breaking the Asian record with a 2.06-meter jump. Along with Nishad, Ram Pal will also be in action, featuring in his second Olympics. He had finished 6th in the Rio Olympics five years ago.