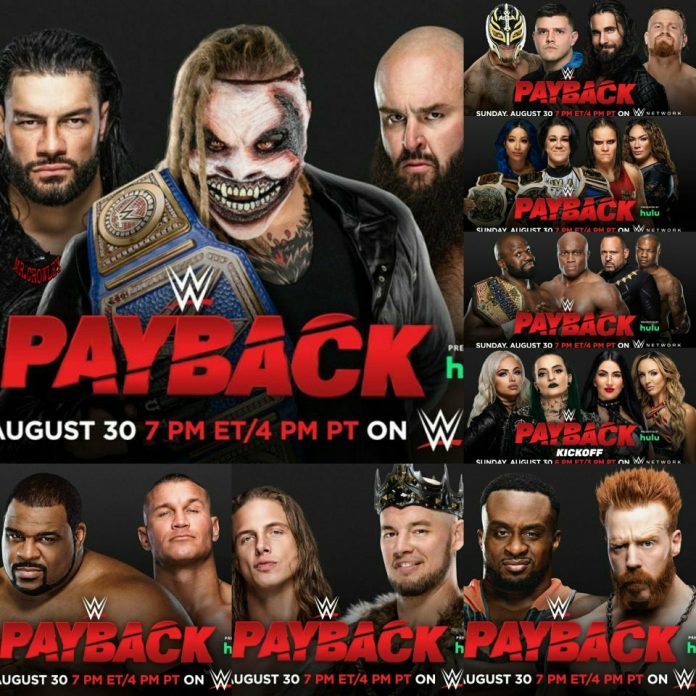 However, on another segment we have a new WWE United States Champion after Bobby Lashley put the show against Apollo Crews in thunderous match. With the end of this contest we have new champs on this very night as the WWE Women’s Championships also changed hands.

Big E picked up an impressive win in this latest PPV of Payback over Sheamus. And Matt Riddle also took his hands on King Corbin in a singles competition. But later became the victim of his assault at backstage.

WWE Payback kicked-off with this Tag team match that took place between the team of the Riott Squad and the IIconics. The Riott Squad started this match keeping the momentum on their side, and try to finish of the things early against the IIconics. It was a high-flying contest between these four harridans in the ring as they almost destroyed each other. However, it was a decent battle and good start of the show since Ruby Riott has a  long rivalry with The IIconics and she wanted to brought out all those frustration in this match. Meanwhile, it was the team of Riott Squad who stomped The IIconics in this opening contest and got past over them with a massive victory.

This match took place for WWE United States Championship where the champion Apollo Crews was set to defend his title against Bobby Lashley and as always Lashley was joined by ‘Hurt Business’ at ringside to make things easier for Lashley. Crews started things early off in this match to stun Lashley by his quick athleticism. It was heated battle between these two as MVP and Shelton Benjamin tried to play mind games at ringside against Crews to make him to lose his title but Crews was  even all more aware of it. But it was early to say as the dominant force Bobby Lashley surprised everyone to win this amazing contest over the champion in this colossal match and became the new United States Champion.

Big E, who is having an impressive run since he is a working in a singles competition as in this match he faced off against ‘the Celtic Warrior’ Sheamus. Big E was favorite to win this match until Sheamus surprised him by taking the advantage on his side to hurt down Big E. It was a nasty match between both the superstars where they suffered a lot in this match, striking hard each other on the floor, and tackling each other at the ringside steel post. After Back and forth and all that, it was Big E who thrashed Sheamus in this exciting contest and got past over Sheamus.

Once again a lethal match for Matt Riddle as he clashed against King Corbin in this match in a singles competition. Matt Riddle and King Corbin had a heated up rivalry within a month or so. With the surprising shot on the face of Riddle, Corbin started things early in this match. But Riddle did not take much time to shift the momentum on his side as he produced a clear kick on Corbin’s face to almost knocked him out. It was a close match from both sides until Riddle reached on the top of the ring and produced a frog splash to put the show end against Corbin. It was an impressive victory for Riddle, but after the victory he was shortly attacked by Corbin at backstage in a frustration.

An unexpected new alliance of Nia Jax & Shyana Baszler took on the current WWE Women’s Tag Team Champions Sasha Banks & Bayley for their Tag team Championships. Everybody was almost waiting for this contest where WWE Universe wanted to see the New Championships after a long time. Jax & Baszler were the favourites to win these titles but ‘the Golden Role Models’ were also ready to retain the championship back. However, A moment later Jax & Baszler squashed the champions in this match as they seemed confident enough to claim themselves as new champs. Baszler then made the double submission maneuver on both Banks and Bayley to win the championships for her and Jax and they crowned themselves as new Women’s Tag Team Championships.

A much awaited contest everybody wanted to see the duo combination of father & Son took on against Seth Rollins & Murphy in a Tag Team match. It was not just a battle for Rey and Dominik Mysterio but also to prove their family’s legacy that was also on the stake. It was a high-flying contest when you had Lucha dragons in the ring but Rollins & Murphy gave some cheap shot to Dominik Mysterio to clear the path. The match included everything strength, athleticism, and sharpness and all. It was a hell of fight between these four belligerents who did their best to get their team home but neither of them decided to give up so readily. However, after a long fight we had the winners Rey and Dominik Mysterio who got the last minute victory over Rollins & Murphy.