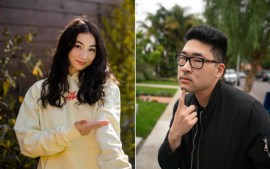 Boomer vs Zoomer: 100T Peter Park’s podcast with Kyedae, WHERE to watch,…

100 Thieves Peter Park: 100T YouTube team- Peter Park was recently announced as the latest member to join the prestigious esports organization, 100 Thieves. The organization dropped a mesmerizing video to announce the latest joining. However, during a recent conversation with 100T co-owner Valkyrae, Peter Park revealed that he blamed the organization’s YouTube team for leaking his joining before the official announcement. For more such updates about 100 Thieves and its streamers, keep following InsideSport.IN.

When the announcement officially dropped, none of the fans were very surprised about the popular American Twitch streamer joining the organization. Peter Park believes that this is because of the organization’s YouTube team constantly dropping hints about him joining 100 Thieves.

100 Thieves recently dropped a video on its official YouTube channel, announcing that popular American Twitch streamer Peter Park would be joining the organization. While the video was quite entertaining, no fan was truly surprised by the news, since Park is a regular face in 100T videos.

After the official video dropped, Peter Park shared his reaction to the same, and got on a call with Valkyrae to discuss the news as well. While Valkyrae was congratulating him for the announcement, she also heaved a sigh of relief, stating that they had managed to make the announcement without it getting leaked. However, Peter Park believed otherwise, saying that none of his fans were surprised by the announcement, since he was such a regular in 100T videos.

Apart from that, he also mentioned that the 100T YouTube team kept dropping hints about the streamer joining in the comments section of various videos. This, he believes, also played a role in letting fans in on the idea of 100 Thieves Peter Park long before the official announcement.

Peter Park is an American Twitch streamer, who is popular for his Just Chatting streams and reaction streams. He also makes regular appearances in 100 Thieves and OfflineTV and Friends videos, and is known to be close friends with members of both organizations, such as Valkyrae, Fuslie, and even Pokimane.

At 100 Thieves, the streamer will be hosting a podcast with Kyedae, named ‘Boomer vs Zoomer’, where they duo will discuss different ideas from the perspectives of both of their age groups. Peter Park is yet to stream as a part of 100 Thieves, but fans will soon get the announcement whenever 100 Thieves and Peter Park will be willing to disclose the same.

For more such updates about 100 Thieves and its streamers, keep following InsideSport.IN.