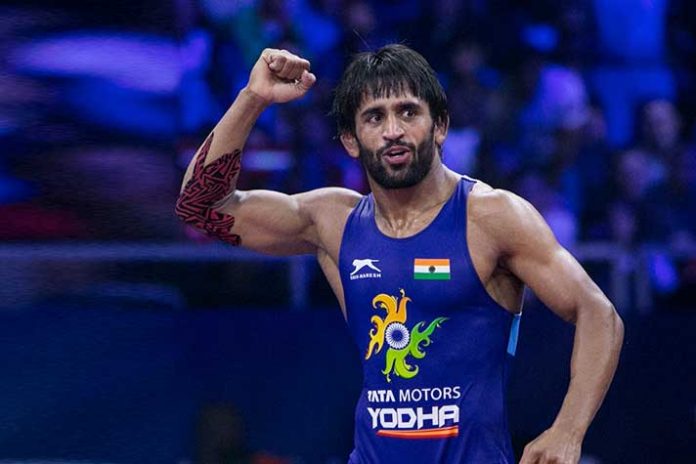 Bajrang Punia has added another feather to his cap. In yet another first for Indian wrestling, Bajrang has become world’s top-ranked freestyle wrestler in the 65kg category.

In the latest rankings released by the United World Wrestling, the world governing body for the sport of wrestling, Bajrang heads the 65kg chart with 96 points – a massive 30-point lead over second-placed Alejandro Enrique Valdes Tobier of Cuba, whom Bajrang has beaten in the UWW World Championship semi-finals at Budapest, Hungary, late last month.

An excited Bajrang though yet again reiterated that these rankings are a mere byproduct of his ultimate goal. “I take pride to place India and Indian Wrestling in the number position in the UWW rankings. But it is just like one of those milestones you are bound to pass on the way to your ultimate goal. Nothing less than a gold at the next Olympics will give me the real reason to celebrate,” Bajrang told insidesport.co.

“I consider myself blessed to get the desired support from all quarters to come this far. This is a reflection of India’s overall growth in wrestling,” added Bajrang Punia.

Japan’s Takuto Otoguro, who denied Bajrang the World Championship gold in the action-packed final, is placed fourth with 56 points.

The 2018 Gold Coast Commonwealth Games and Jakarta Asian Games gold medallist, Bajrang had to settle for the silver in the UWW World Championships in spite of an extremely charged up show on his way to the final.

Bajrang is India’s best hope an Olympic gold at the 2020 Tokyo Games.

The latest UWW rankings feature eight other Indian wrestlers in the top 20 list of their respective weight categories. Men’s freestyle wrestlers Sandeep Tomar in the 14th position in the 61 category and Deepak Punia, ranked 13th in 86 kg, are the only two other male wrestlers in the UWW’s Top 20 table.

Even as Vinesh Phogat and Divya Kakran, the Jakarta Asian Games medallists, are out of competition nursing injuries, six Indian girls have made their performance on the mat count for the UWW Rankings chart. Ritu Phogat (ranked 10th in 50 kg), Pooja Dhanda (ranked 6th in 57 kg), Sangeeta Phogat (ranked 18th in 59 kg), Ritu Malik and Navjot Kaur (ranked 11th and 18th respectively in the 65 kg) while Navjot is also ranked 9th in the  68 kg and Kiran (ranked 9th in 76 kg) figure in the official list of world’s prominent wrestlers.

However, India has drawn a blank in the Greco Roman category.

Also Read: Bajrang Punia: Journey to the top with no mobile, cinema or roaming around