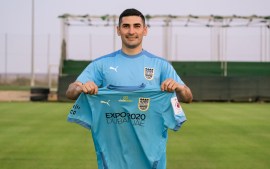 Al-Quwa Al-Jawiya vs Mumbai City: Air Force 1-2 Mumbai City – They say keep on dreaming, till it becomes reality. Mumbai City FC today accomplished that dream. Ahead of their first game against Al-Shabab, Mumbai coach Des Buckingham made it clear that it was his dream to make Mumbai the first Indian club to win a game in the AFC Champions League.  Follow AFC Champions League and ACL Live Updates on InsideSport.IN

That dream came true today as the Mumbai outfits against all odds, turned the tide to their favour to win 2-1 against Al-Quwa Al-Jawiya (Air Force). A sublime performance from the Islanders saw them overcome the Iraqi side to register an emphatic win.

A historic night in Riyadh for #TheIslanders as we become the first Indian team to win an AFC Champions League game! 💥#AFCvMUM #IslandersInAsia #ACL2022 #AamchiCity 🔵 pic.twitter.com/d09aBF9G9o

It was Hammadi Ahmad who gave Air Force the lead near the hour mark. The Iraqi side looked deadly in the attacks and the goal was just a matter of time. A wonderfully crafted move saw the ball meet the net.

However, the entire momentum of the game shifted when Mumbai conceded. In a span of just 5 minutes, Mumbai scored 5 goals to win the tie. At the 70th minute mark, Diego Mauricio was fouled in the box. With a calm head, he converted it with ease.

5 minutes later, Rahul Bheke guided home the winner when he hit a bullet header to score the second for his side.

Where will AFC Champions League match between Al-Quwa Al-Jawiya vs Mumbai City be telecasted?

Football fans can watch Al-Quwa Al-Jawiya vs Mumbai City game on the Star Sports Network. The game will be telecasted Live on Star Sport 3 channel.

How to watch Al-Quwa Al-Jawiya vs Mumbai City via Live Streaming?

Fans can view this match via Live Streaming on the Disney+ Hotstar website or app.