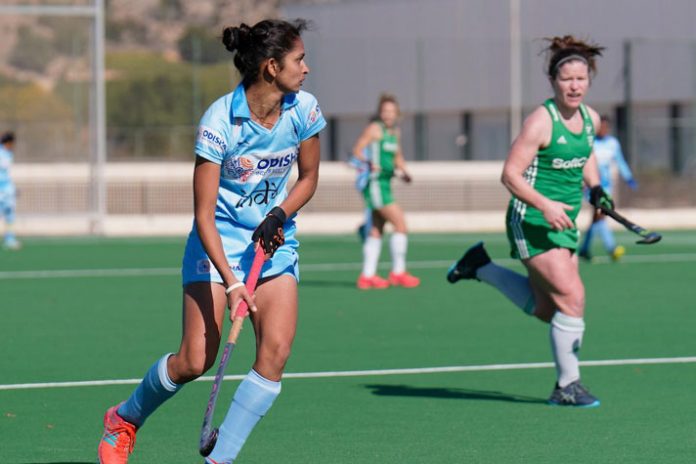 The Kurukshetra-born attacking midfielder Navjot Kaur has completed the milestone 150 international appearances during India women’s hockey teams match-winning performance against Ireland during the Tour of Spain here on Sunday.

Navjot made her international debut in 2012 in a series against New Zealand in Napier after showcasing her talent in the Junior Tournaments such as the Junior Asia Cup and International U-21 tournament in the Netherlands where India had finished third.

Born in Kurukshetra, Navjot has climbed the ranks in the National Team with significant performances. She was part of the team that excelled at the Hockey World League Semi-Finals 2015 taking India to the doorsteps of the 2016 Rio Olympics.

The ace striker had also featured in the 17th Asian Games, 2016 Rio Olympics, 4th Women’s Asian Champions Trophy and was also part of India’s Silver Medal feat at the 2018 Asian Games and has been a regular member of the India team that has climbed the world ranking to No.9.

Rajinder Singh, Secretary General, Hockey India, congratulated Navjot Kaur on her 150th international appearance. “Navjot has shown India that her experience is vital for the team, time and again with her improved performances over the years. I congratulate her on completing her 150 international matches for India today. She is an inspiration for young, budding players who are aspiring to take up hockey professionally. I wish her the very best for future matches, especially in India’s attempt to qualify for the Tokyo 2020 Olympics,” he said.