IND vs NZ 1st Test Drawn: With 52 balls (8.4 overs) left after Tim Southee’s wicket, all India needed to take was one scalp to win the 1st Test in Kanpur. On the crease, Rachin Ravindra and Ajaz Patel — two India born with no experience of playing in India — but Ravichandran Ashwin, Ravindra Jadeja and Axar Patel failed to get the wicket as the match ended in a draw due to bad light. Follow India vs New Zealand LIVE updates on InsideSport.IN

On a pitch that was keeping low in every odd-ball, it was a brave act of defiance from a Test debutant Rachin Ravindra (18 off 91) and a 10-Test old Ajaz Patel (2 off 23). Yet, their 10-run stand off 52 balls was the defining moment of the Test, not Jadeja’s 4/40 or Ashwin’s 3/35. At 4:26 PM, when umpires finally decided to end the game, the Shreyas Iyer’s dejected face was the most visible one while the Kiwi duo got the hero’s welcome back in their pavilion.

Before Rachin Ravindra and Ajaz Patel built up a late resistance to save the Test and their World No 1 spot in ICC rankings, it was Shreyas Iyer who stood tall. His historic feat on Test debut with a century and a half-century gave India a much-needed backup in the middle-order after stand-in skipper Ajinkya Rahane and vice-captain Cheteshwar Pujara failed to make any significant contribution yet again.

“We were actually keeping things under control. We were bowling in good areas and we knew if we had the time to go on and put some pressure on them, we could get the job done but light was always going to come in the last session. There have been bad light in every single day of this Test match so we did expect it, so no complaints. Couldn’t get the job done but we stuck together well,” R Ashwin said post-match.

The other Indian to shine was Axar Patel, who bagged his fifth five-wicket haul in just seven innings to show everyone, he is not just a second-fiddle option to Ravichandran Ashwin and Jadeja, he could lead the attack too. 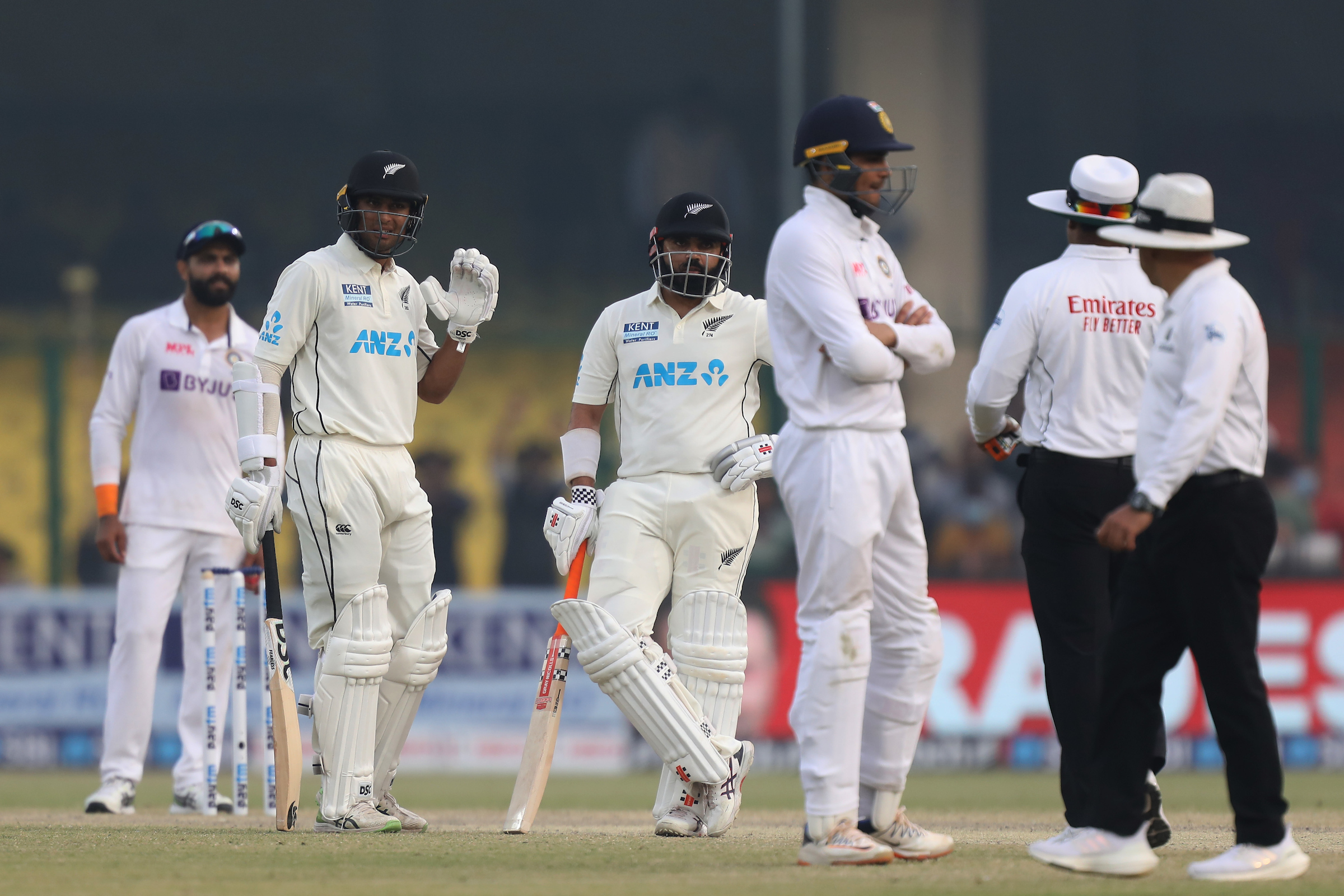 Virat Kohli-led India will next face Kiwis in the Mumbai Test that kick starts at Wankhede Stadium on December 3. The full-time skipper will return after a break as India will look to win the Test series 1-0 and get to the top of ICC Test Rankings. 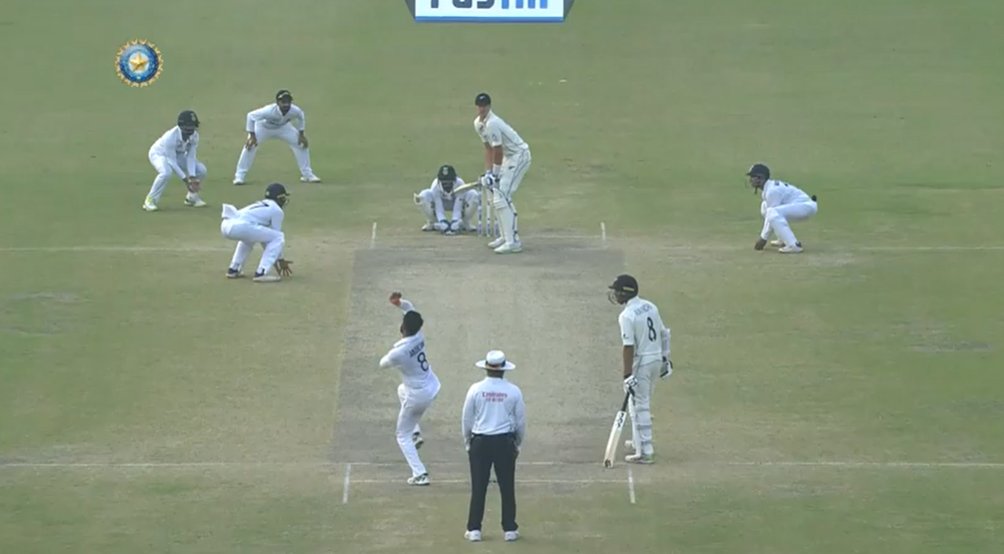 Resuming the final session at 125/4, Indian bowlers clawed further deep as Axar Patel had Henry Nicholls adjudged LBW. Then after five overs, Ravindra Jadeja got the all-important wicket of Kane Williamson. The NZ skipper decided to go back and the ball skid on to trap him plumb in front. He departed for 24 off 112.

In the 79th over, Tom Blundell was bowled round his legs by Ashwin. India took the second new ball in the 84th over as the match reached the endgame. With the light fading and time running out for the hosts, Ravindra Jadeja struck in quick succession to send Kylie Jamieson and Tim Southee back into the dugout. 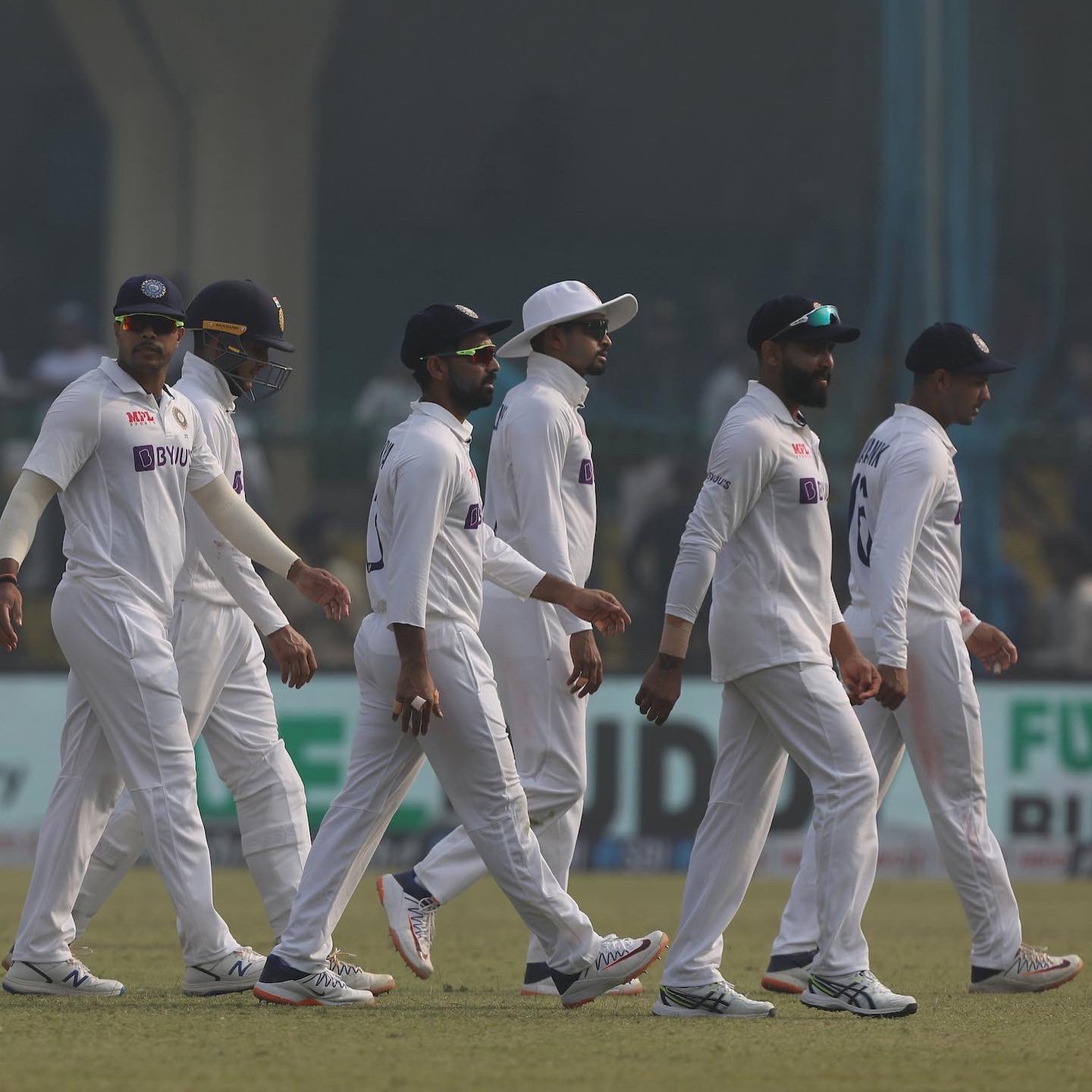 One wicket short, Indian bowlers threw everything at the batters on the pitch, Rachin Ravindra and Ajaz Patel. But Rachin who played 91 balls in the second innings ensured his side walked away with a draw.

Earlier, Team India managed to take three wickets in the second session on Day 5 of the ongoing first Test against New Zealand here at Green Park, Kanpur on Monday.
At the tea break, New Zealand’s score read 125/4. Will Somerville (36) was sent back to the pavilion by Umesh Yadav in the 36th over of the innings and this brought skipper Kane Williamson to the middle.

Latham however marched on and he brought up his half-century in the 51st over of the innings. Latham (52) was bowled by Ravichandran Ashwin in the 55th over and as a result, the off-spinner went past Harbhajan Singh’s tally of 417 Test wickets. Ross Taylor (2) also failed to score big, and New Zealand was quickly reduced to 125/4.
IND vs NZ 1st Test drawn: Ajaz Patel, Rachin Ravindra survive 52 balls to draw first Test as Ashwin, Jadeja & Axar fail to take one wicket
New Zealand 1st Innings 296/10 (142.3 ov)
India 1st Innings 345/10 (111.1 ov)

For more sports news and India vs New Zealand LIVE score updates, follow us at insidesport.in

IND vs WI: Selection Committee source to InsideSport, ‘Team announcement this week, Rohit Sharma will be back to lead side’

IND vs WI: Selection Committee source to InsideSport, ‘Team announcement this week, Rohit Sharma will be back to lead side’