Hamilton led Bottas and Verstappen – who shrugged off his qualifying crash – at the start but on Lap 10, Mick Schumacher spun and hit the Turn 23 barriers. The Safety Car soon turned into a red flag, crucially giving Verstappen a free stop in the pits, while the Mercedes had stopped under yellows.

The Lap 15 standing start saw Hamilton lead, but Verstappen went wide and off-track at the first chicane, cutting back across Hamilton, who dropped to P3 behind Alpine’s Esteban Ocon (who also enjoyed a red flag tyre change and the subsequent advantage). However, there were two separate incidents behind in which Sergio Perez was collected by Charles Leclerc and Nikita Mazepin collided with George Russell – so another red flag was called.

MAX: “It was eventful, a lot of things happened that I don’t fully agree with but it is what it is.

“I slowed down, I wanted to let him by, I was on the right but he didn’t want to overtake and we touched. I don’t really understand what happened there”#SaudiArabianGP 🇸🇦 #F1 pic.twitter.com/bvQyx7CxNW

A cacophony of bargaining calls by the Red Bull and Mercedes pitwalls followed but the Lap 17 restart would see Ocon start ahead of Hamilton then Verstappen in P3. In that restart, the Dutchman made a terrific move using his brand-new medium compounds down the inside of the opening chicane for the lead while Hamilton found himself impeded by Ocon, who like Verstappen missed the Turn 2 apex, passing the Alpine a lap later. 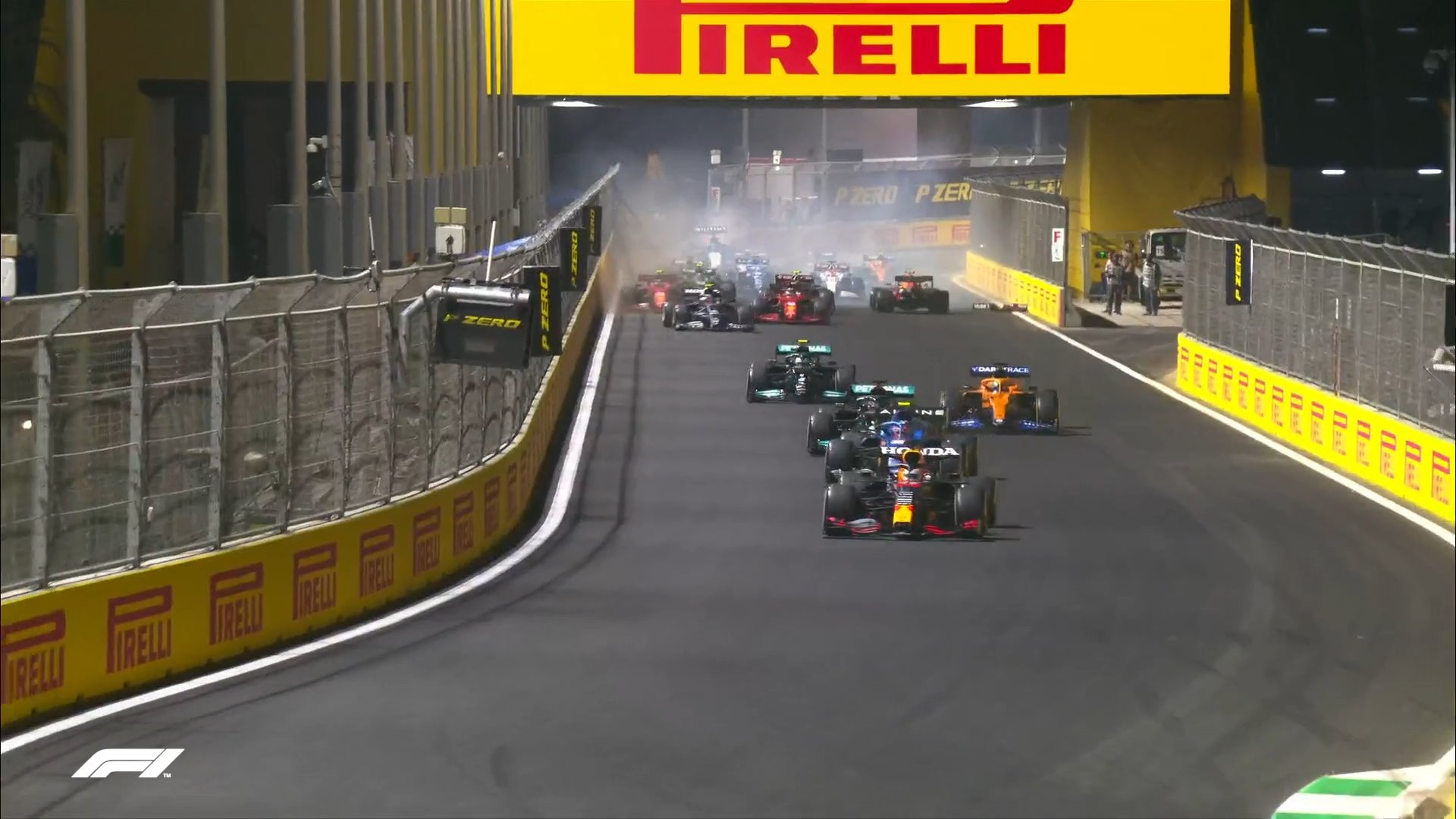 Three Virtual Safety Car periods followed from Lap 28 to Lap 36 after which Hamilton was in DRS range of Verstappen. The Mercedes driver attempted a move on Lap 36 on the main straight but the Dutchman braked too late for comfort, running wide at Turn 2 and retaining the lead. He was instructed to give P1 back and on Lap 37 the Red Bull driver slowed – only for Hamilton to get caught off guard and clip the rear of his rival, taking front-right wing damage.

Cue more calls to race control from Red Bull and Mercedes. Meanwhile, Hamilton closed in and looked to get past the Red Bull on Lap 42 but Verstappen pushed him wide and continued on. This time, the stewards stepped in and put a five-second time penalty on the championship leader.

LEWIS: “I’ve been racing a long time, but that was incredibly tough! I tried to be as tough and as sensible as I could out there, with all my experience over the years… It as difficult, but we persevered as a team”#SaudiArabianGP 🇸🇦 #F1 pic.twitter.com/chzxvXuiaW

Hamilton came across Verstappen at the final corner on Lap 43 and pushed him wide at Turn 27, taking the lead and putting in fastest laps to boot for an eventual winning margin of 10s over his rival – equalling the championship points tally.

Ocon, who had benefitted from a stop during the first red flag, missed out on a podium by just a tenth of a second having lost P3 right on the line at the chequered flag. That put the Alpine driver fourth ahead of Daniel Ricciardo of McLaren, who started 11th but enjoyed a rapid start and a red-flag pit stop for P5. 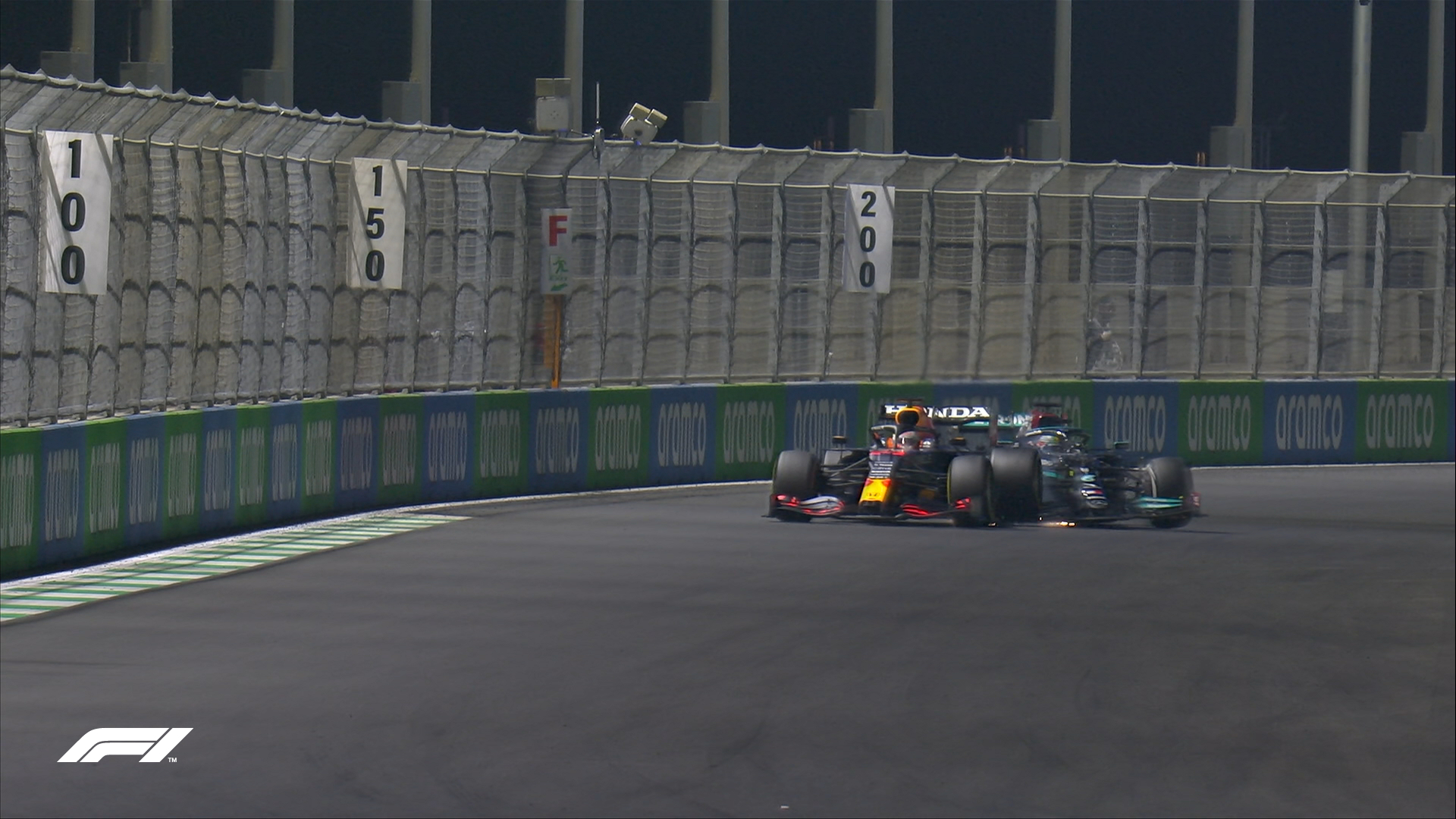 In sixth was Pierre Gasly, who lost places at the start but made them back in the second race restart for AlphaTauri – keeping the Ferraris of Charles Leclerc and Carlos Sainz in P7 and P8 respectively.

Antonio Giovinazzi started 10th but ended up ninth ahead of Lando Norris, who started on softs but pitted during the first Safety Car to end the race on hard tyres.

Abu Dhabi hosts the season finale, and with Hamilton having taken 26 points to Verstappen’s 18 here, the championship protagonists are now equal on 369.5 points. But the fallout from Jeddah may well continue through the night, with the stewards set to investigate Hamilton and Verstappen’s Turn 27 tussle after the race.

For more sports news and Formula 1 live updates, follow us at InsideSport.IN